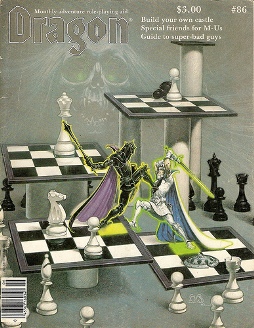 Art Evolution, the continuing study of a single iconic character as imagined by the greatest fantasy RPG artists in the past thirty years continues, but if you want to view previous artists, you can begin here.

‘Dragonlance Lyssa’ was complete, as was a personal dream. I’d managed to get Larry Elmore, and was continuing down my list of incredible talent. As I’ve mentioned several times before, I like to read old issues of Dragon Magazine, and you can’t possibly do that without stumbling over an issue with a Den Beauvais cover.

This is also a good jumping off point in itself, and that is the very important role Dragon Magazine played in the landscape of the RPG field. In its original incarnation, ‘The Dragon’ was first published in June 1976, predating even the module series we’ve seen thus far in this article. Even its founder, Gygax, didn’t believe it would have the lifespan or impact that it did for gamers across the globe, but in its finality that print version of Dragon lasted thirty-one years.

In that time, it not only helped lauch a thousand writing careers, several gaming worlds including The Forgotten Realms, and more monsters and magic than is easily catalogued, it became the industry representative for cream of the crop fantasy art. 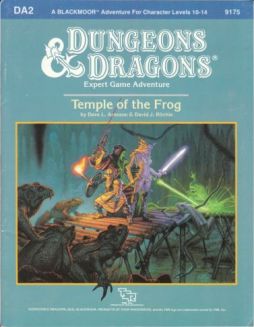 Covers of Dragon are a focal point for all the beauty, imagination, wonder, and comedy that can be found in the genre. When The Art of Dragon Magazine was finally published, one artist and contributor found his way to that honored place of the cover, Den Beauvais.

Certainly, Den contributed to other role-playing games themselves with fantastic covers for Dave Arneson’s DA2 module, Temple of the Frog, and Ravenloft’s Von Richten’s Guide to Vampires just to name a few, but his work on Dragon galvanized his place in the annals of gaming history. 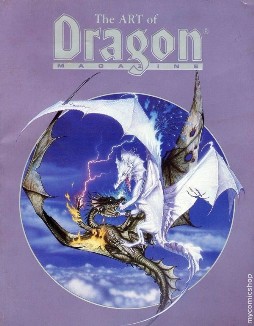 I’d first seen Den’s covers at a friends house when his older brother left out a stack of Dragons. These were his now legendary Chess series that appear on the covers of nearly half a dozen Dragons in the mid-eighties.

As I looked over this project, I couldn’t help but be pulled to those works, and I made the decision to try for Den in hopes of getting a contribution. I went to his website and sent an email but received no answer. My initial thought was that he was far too comercially viable and busy to participate or even reply, but he was always in the back of my mind, so six months later I tried again. This time the response was almost immediate and I found out that he’d recently moved from San Diego back to Canada, but he was very receptive to the project and we discussed various contributions until we settled on a kind of fantastic homage. Note: This, my readers, goes to show that sometimes persistance pays off, and this time it did so in spades. 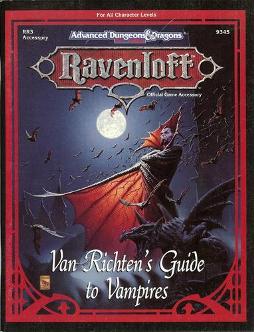 Taking a page from the aformentioned Chess series, Den, now a full-blown computer art wizard, used the cover from Dragon #89, lifted the notorious White Queen from the chess board who was partially concealed behind a Black Knight, and reforged her as an incredible Lyssa. It worked perfectly, the subltey of the added color and the new polish and incandecent magic brought her to life like never before.

Dreams, one after the other, were coming to life around me like I’d never imagined possible. Each day this little insanity of a project was creating a new wonder to behold. Thanks to Den, and all those that came before, Art Evolution was a reality, and the more names I went after, the more profound its fully realized impact.

Den Beauvais broke into the industry with TSR’s Dragon Magazine as the early eighties RPG universe was hitting its stride. He never joined the TSR pit, his talents instead taking a freelance road as RP art started becoming something more than a part-time job.

Dragon, unlike modules of supplement covers, had a different feel. When you looked at a Dragon cover, you were seeing a more polished art, the magazine showing us paintings rather than what might have felt like cut scenes in other RP hardcopy.

This kind of venue provided Den an opportunity to explore a full canvas without being boxed into a theme or story that might bind RPG books. The freedom involved gave rise to Den’s imagination, and what he provided TSR still resonates today. 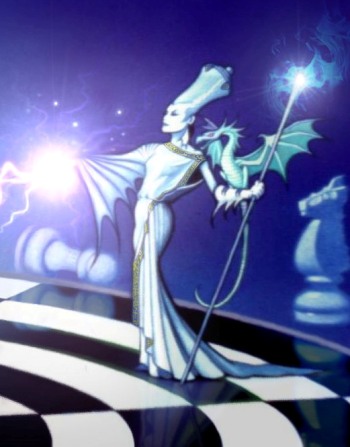 Although he has graced module and supplement covers for RPGs, Den is best known for bringing a kind of seventies ‘Van Gods’ painting to TSR’s Dragon in his iconic ‘Chess’ series.

These covers, beautifully depict in what can be considered a very colorful oxymoron of black and white, gave gamers a glimpse of their own imaginations at work. Den brought forth the power of the airbrush to role-playing art, and the incredible smoothness of that medium played out perfectly on the chess concept.

The art transformed into more than a magazine cover, and as he gave life to the pieces, he also invigorated a tired concept with airbrush splendor. The pieces are filled with painstaking personality, a gift of Den’s talent, and their eternal struggle takes on a good versus evil motif that has us all begging for the next move.

Den’s artwork tends to revolve around the light and dark theme, and yet he does diverge to give us more standardized dragons and lavishly beautiful landscapes and women. His art is a gift, something so flawless about it we tend to take it for granted. The flow and detail meld into a world where strength lies in the kind of silky veil that covers its harder lines.

There is no doubt that Den is an epic painter, and detail with which he attacks projects has lent to his staying power in the industry for more than thirty years.

I believe the best quote I’ve ever seen concerning Den was this anonymous one by an industry insider, ‘Den Beauvais was, hands down, the best artist TSR employed. He was original when others were derivative, realistic when others were formulaic, edgy when others were merely bombastic. I loved his work.‘ If that doesn’t give you a perfect picture of Den’s work, nothing will.

What I love about this whole thing is seeing the compeltely different styles and visions of the same character. Very cool.

This Lyssa is different from all the others, but in a new way. She’s cold, older, wiser. Maybe that’s just the whole “chess piece” notion in my head. 0_o

Witch: I think the chess pieces really resonated with folks, and yes, the lines here do make Lyssa look harsh and cold.

What’s the deal with the small dragon? That wasn’t in the original brief, was it? Looks like McAllister used it first, and then Reynolds and now this artist have seen fit to include it. Interesting stuff. ;D

Cephalophore: That is an interesting point. When I did the basic run through for each artist, they were given free reign with the character’s equipment. In this fashion a few chose to give her a dragon familiar. Again, that was completely up to them.

This shot, however, is a redesign of the original cover art for Dragon Magazine #89. “Lyssa” is a very small part of that cover, and Den took her out and added to her, although the dragon was already a part of the original. In this case, Den didn’t choose the dragon like McAllister or Reynolds.

Great eye for detail though!

[…] Art Evolution continues, from its roots here, to the incredible talent that created the newest vision in ‘Dragon Chess Lyssa’. […]