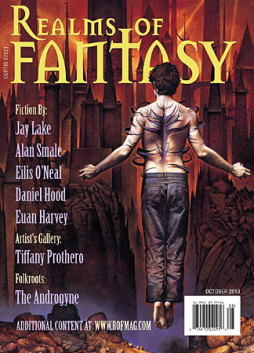 Tir Na Nog Press has shuttered Realms of Fantasy magazine, this time apparently for good. Its last issue was September/October, pictured at left.

Realms of Fantasy was one of the few remaining professional fantasy fiction magazines. Founded in October 1994 by Sovereign Media as a sister magazine for Science Fiction Age, it published acclaimed  fiction from some of the biggest names in the industry. Its long-time fiction editor was Shawna McCarthy.

In addition to fiction and top-notch review columns, the magazine was well known for its slick look and thoroughly professional design, and it pioneered a mix of art and fiction with gorgeous color galleries of top fantasy artists virtually every issue.

In a controversial move early this summer, publisher Warren Lapine threatened to close the magazine if enough subscribers didn’t renew — which generated some lively discussion on whether publicizing approaching doom was a workable marketing tactic for a modern magazine. [Looks like it wasn’t.]

In his farewell note, Lapine complains about how much money the magazine cost him, and offers to sell it to “a responsible party” for $1. He claims the December issue is ready for publication, and will be released in PDF format on the website for free download by subscribers. He is also closing his vampire magazine Dreams of Decadence.

Realms of Fantasy was well known for discovering and nurturing writers who have since gone on to stellar careers, something done by fewer and fewer magazines. Its departure leaves a significant void in the industry.

For the record, I’d like to make it clear that I was not complaining about anything. I simply wanted people to know to what extent I had tried to keep the magazine afloat. Also your choice of wording in “He claims the December issue is ready for publication” implies that you may think I’m not telling the truth. We’ll be posting the finished magazine in the next day or so. Did you mean to slant this negatively for some reason?
Warren Lapine

Thanks for the comment. Sorry if you felt my comments were negative in any way; they weren’t intended to be.

I didn’t see anything negative in repeating your claim regarding the December issue, for example. As far as I’m aware you have a decent reputation for fulfilling your promises, so phrasing it that way didn’t feel negative to me.

I didn’t feel comfortable simply stating that the finished magazine would be posted in a day or two because, of course, even the best of intentions can fall victim to circumstance, especially in a failed business. I’ve been part of my fair share of failed businesses, and I’ve learned the hard way to be cautious when passing along these kinds of statements. Sorry if that caution translated as negativity for you.

I sincerely meant the things I said about RoF’s reputation for finding new talent and its place in the market, and how irreplaceable it is.

Thanks for the clarification, John. As for me, I’m going to concentrate on the self help books that put me in a position to buy Realms. They are still doing well and I need to spend more time publishing them.

It’s really sad to see one of the field’s leading fantasy magazines bite the dust. Kudos to you, Warren, for keeping it alive an extra 18 months. You fought the good fight, and you fought it valiantly.

It looks more and more these days like fiction magazines are a thing of the past. However, I take a modicum of comfort in the fact that ANTHOLOGIES of short fiction are still doing quite well.

Hey JF, are you indicating that Black Gate is also a thing of the past?

The free PDF of the December issue of Realms is now up on the ROF website.

No, John O’Neill is far too clever to let that happen. 🙂 However, by putting out two BIG issues per year instead of 4 or 6 small issues, BG is actually following more of a “twice-a-year anthology” model than a periodical model. And since the quality of BG is so high–both in content and in presentation–nobody’s complaining.

My point was that the old “monthly fiction magazine” model (or even bi-monthly) seems to be dying, if not dead. Yeah, there are still are a few monthly fiction mags left (Asimov’s, Analog, The Mag of Fantasy and Science Fiction), but they are the exceptions to what seems to be the new rule.

Or, to put it in terms of an old joke: “How do you make a small fortune in publishing? Start with a large fortune.”

I’d love to see a resurgence in monthly and/or bi-monthly fiction mags. But these days those types of mags only seem to be really thriving online. (Or are they thriving? Do online fiction mags make a profit? I really don’t know…)

I just hope John and his crew keep BLACK GATE coming for many, many years…

“Yeah, there are still are a few monthly fiction mags left (Asimov’s, Analog, The Mag of Fantasy and Science Fiction)…”

Minor point, but F&SF hasn’t been a monthly for a year and a half or so. They went bi-monthly I think in April of 2009.

Glad to hear the December issue of REALMS OF FANTASY is now live. Looks like a great issue!

Thanks for the kind word. One of the major difference between us and the professional magazines (such as Asimov’s, F&SF, and RoF) is that Black Gate publishes only when we can afford to publish.

Warren sank $50,000 into RoF to keep it going… that’s a lot of money. Black Gate is debt free, and we intend to keep it that way. It’s meant some hard decisions on publication schedule and the like, but the end result is we’re doing fine financially, and with luck the magazine can continue for many years.

Good to see you here. Good point about F&SF… although, like John Fultz, I often forget it’s bi-monthly. When it switched to every two months, it also switched to double issues, which meant it published roughly the same amount of fiction. So not all that much has really changed. 🙂

I’ll miss ROF. I wasn’t a dedicated reader. I’ve only picked up 15 issues since 2003. But, I’ve always enjoyed the stories I had read, especially reoccurring authors like Graham Edwards, Joe Murphy, and Richard Parks. I am grateful to ROF for introducing me to these and many other authors over the years, and I wish them all the best of luck in any of their future endeavors.

Thanks Kevin. I feel the same way — although I read even fewer issues than you, from the sound of it. But I was particulary impressed with the work of Richard Parks.

Black Gate » Blog Archive » The end of Realms of Fantasy begs the question: Too much fantasy on the market?

[…] notion. Realms of Fantasy, one of the few remaining print fantasy magazines in the market, goes under, and it’s because there’s too much fantasy for it to complete against? Yes, at least in my […]

[…] than three weeks ago we reported that Realms of Fantasy magazine was being closed by Tir Na Nog Press and publisher Warren Lapine. […]

[…] Na Nog Press and reappeared in July 2009, skipping only one issue (May 2009). A year later Lapine announced the magazine would be shut down after the October 2009 issue, but Realms was spared again when […]