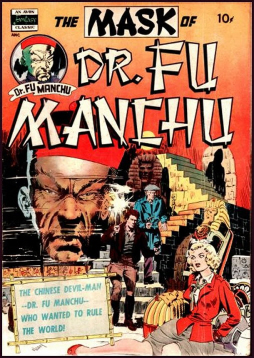 From his first appearance in print in the pages of The Story-Teller in October 1912, Sax Rohmer’s criminal mastermind, Dr. Fu Manchu took the world by storm. While Rohmer would complete three novels featuring the character between 1912 and 1917, the Devil Doctor would extend his domain to include film and comics in the fourteen years before Rohmer bowed to commercial demand and revived the series.

Leo O’Mealia was responsible for adapting Rohmer’s three original novels into a daily newspaper strip, Fu Manchu from 1930 to 1931 while Warner Oland was occupied starring as the character in three feature films and a short for Paramount. Oland, incidentally, was the second screen Fu Manchu following Harry Agar Lyons in the 1920’s.

The comic strips were later colored and edited as a back-up feature in the pages of Detective Comics which top-lined a new comic character in the pulp tradition known as The Batman.

Despite the fact that Rohmer went to great pains to make it clear that the Devil Doctor was clean-shaven, the very first magazine illustrators to tackle the character were responsible for grafting upon his terrifying visage the stereotypical Chinese moustache known today as a Fu Manchu.

O’Mealia presented Fu Manchu devoid of facial hair in his daily strip, but in place of Rohmer’s famous description of “a brow like Shakespeare and a face like Satan,” the artist depicted a repulsive hunchbacked gargoyle.

The resulting figure is not unlike the monstrous Soviet villains in Jack Kirby’s Cold War-era work for Atlas and Marvel or, for that matter, Kirby’s earlier Golden Age portrayal of hideously inhuman Japanese soldiers in his work for Timely Comics. 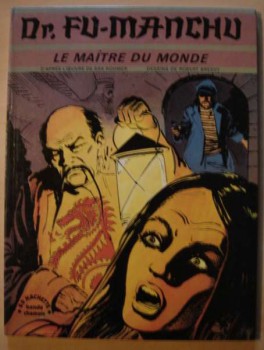 Despite the unsettling and dehumanizing portrayal of the titular villain, O’Mealia’s strips are surprisingly faithful to the original text. The exception being the final strips in 1931 which offered a more traditional wrap-up to the storyline than any Sax Rohmer book would ever do.

The most accessible source for sampling Leo O’Mealia’s Fu Manchu strip is Malibu Graphic’s trade paperback collection which features two non-sequential episodes. DC Comics has reprinted several Golden Age issues of Detective Comics which reprint the odd installment of the colored strip, but nothing approaching the full run has ever been reprinted.

The one Holy Grail for collectors would be an Australian magazine which dedicated an entire issue to reprinting a sequential storyline. Surprisingly, the internet offers little information on this publication and copies are scarce on the collector’s market making it a highly sought after collectible.

The great Wally Wood was responsible for the most famous Fu Manchu comic book adaptation in 1953’s The Mask of Dr. Fu Manchu for Avon. Based on Rohmer’s 1932 novel which was the bestselling title in the series history (doubtless aided by the contemporaneous release of MGM’s camp classic film adaptation with Boris Karloff and Myrna Loy), Mask sees Wally Wood at the peak of his Will Eisner-influenced early period.

While the original Avon comic is quite pricey, a1964 reprint as Dr. Fu Manchu is far more affordable. The title has also been reprinted in both color and monochrome in various books, magazines, and facsimile editions making it the easiest of the comic adaptations to acquire. 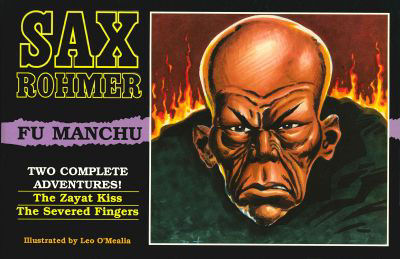 A Finnish comic adaptation of Rohmer’s 1941 bestseller, The Island of Fu Manchu was published in Scandinavia at the same time as Wally Wood’s Avon title. The comic was translated into English and published in the UK in 1957.

A later digest-sized monochromatic reprint of the English translation is far more common than either the Finnish or English originals. The adaptation, as with Avon’s Mask, is rushed to fit the page count.

The artwork is not as impressive as Wood’s, but compares favorably with the serious, if generic look of the UK 007 comic strips or American serials such as Judge Parker or Mary Worth.

The most faithful of all Rohmer adaptations was a French comic strip in the early sixties. While the artwork is comparable to the generic serial style noted above, it remains the high water mark in fidelity to the original work. Sadly, these have never been translated into English. A graphic album collection of several continuities from the strip (similar to Herge’s Tintin collections) was printed as Fu Manchu, Master of the World in French and Italian in the mid-seventies and is well worth hunting down for collectors.

The longest-running comic adaptation of Rohmer’s venerable character was Marvel’s Master of Kung-Fu (1972-1983). Marvel licensed Sax Rohmer’s characters from the author’s widow and used them as supporting players from which to build a series capitalizing on the martial arts craze of the early seventies, the popularity of the five Christopher Lee Fu Manchu films of the mid-sixties, and the successful Pyramid paperback reprints of Rohmer’s series in the sixties and early seventies. 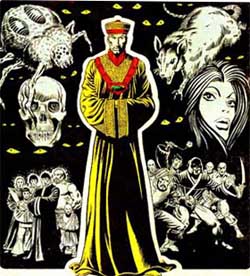 The series’ unconventional hero, Shang-Chi resembled both Bruce Lee and David Carradine in Paul Gulacy’s highly-stylized artwork. Mrs. Rohmer and longtime Fu Manchu fans were outraged with the violence and dishonorable actions of the Devil Doctor in Doug Moench’s scripts at the time.

In hindsight, Moench had done his homework well apart from some early errors in characterization in the first few issues. His take on the material was intelligent, engaging, and, most importantly, respectful to Chinese culture.

Mrs. Rohmer died in 1979 and while her husband’s longtime assistant Cay Van Ash and I were later to benefit from the Literary Estate’s willingness to see the book series continue, Marvel Comics has been less successful in extending a license for the characters in comic form.

This has meant that their periodic revivals of the Shang-Chi character are prevented from including Rohmer’s characters, but has the larger impact of preventing Marvel from reprinting the series despite a great deal of popular demand from comics fans.

Given the quality of Moench’s scripts and Gulacy’s art and the ongoing need to combat the harm done by yellowface film portrayals and offensive caricatures in earlier comic appearances, seeing Master of Kung-Fu reprinted or adapted to the silver screen (like so many other Marvel properties) would only help increase public awareness and rehabilitate the perception of Rohmer’s work.

Hopefully, Marvel and the Rohmer Estate can reconcile their differences to everyone’s mutual benefit in the near future. 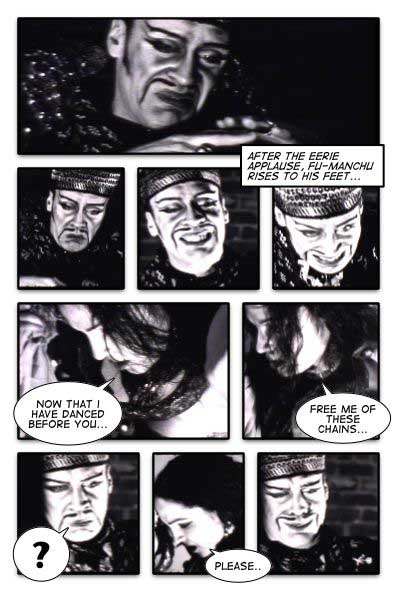 Meantime, the lasting influence of the Karloff portrayal has influenced two other film and comic adaptations. Rob Zombie’s faux Grindhouse trailer, Werewolf Women of the SS featured a campy drag cameo by Nicholas Cage as Fu Manchu. Zombie has been preparing a comic book adaptation of the concept in recent months.

The other film and graphic art portrayal comes from gifted stage actor Michael McQuary and the stunning photographic imagery of Marc Briatack. The duo have prepared a pulp photo art tribute to the character mixing photography with comic art as well as having filmed several Fu Manchu short films and a web serial.

Excerpts from their forthcoming pulp art book and their various shorts and feature-length serial can be viewed on YouTube or at their respective websites, michaelmcquary.com and dynamarcfilms.blogspot.com

Dr. Lawrence Knapp’s The Page of Fu Manchu website remains the best source for information on Sax Rohmer and his works and can be visited at www.njedge.net/~knapp/FuFrames.htm

I had the opportunity to discuss Fu Manchu in comic strip and comic books at greater length on a recent episode of Ric Croxton’s excellent podcast, The Book Cave. Those interested are welcome to listen in at thebookcave.libsyn.com.

Heh, one of my favorite jokes as a kid;

“Many men smoke but Fu Manchu!”

-get it?
-deliberately done in the stereotyped Oriental accent and if both hands are free, pulling the eyes slanted!

Got another ‘lil brat laughing so hard he swallowed his ‘baccy:-)

Yeah, I chewed tobacco as a kid, and I mean GRADE SCHOOL, when I could get/buy, or ‘otherwise’ obtain it. Never could smoke tobacco, though. And, guess what, once I got to jr high school I never cared about it again.

Just wanted to comment to thank you for this detailed article. It’s a great overview. One minor point, just in case it needed to be said: it wasn’t just Kirby turning out caricatures of the Japanese and the Soviets in the 40s and 50s — it was not at all uncommon in comics of the time.

Also, other people worked on Marvel’s Master of Kung-Fu besides Moench and Gulacy, who are perhaps best-known. Off the top of my head, Mike Zeck had a pretty good stint on the book, and Gene Day had a famous run. It’s really too bad rights issues have prevented any collection from seeing print; the book attracted a lot of praise, and is generally considered a bright light from an era when mainstream comics were at a low creative ebb. It’d be good to see it more easily available.

I find it intringuing that Rohmer wrote Doctor Fu Manchu sequels. Why? Not may other creators of “classic monsters” did. Stoker did not write a sequel to Dracula, the Frankenstein’s Monster did not return in a sequel, etc.

So, it actually made some sense to do a comic book series about Doctor Fu Manchu.

You need to consider the origins of the first set of Fu Manchu episodes that were later compiled as the first book (or “fix-up”) with minor editing. Unlike Stoker or Shelley, Rohmer was writing a magazine series where success virtually guaranteed a second series of stories and then a third much in the same way as the FANTOMAS stories were written in France.

I did mention it in this very article. The only adaptation was ISLAND OF FU MANCHU. I’ll be covering that title next in my ongoing Rohmer series so there won’t be any need to separate it out from the comic adaptation. Thanks for the link though and I appreciate your reading the article.