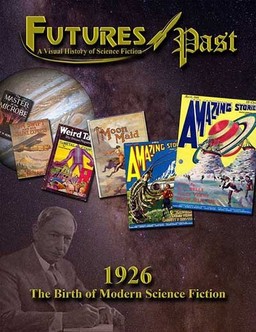 I have a great curiosity about the beginnings of science fiction and fantasy in the United States — particularly what’s known as the Gernsback Era, beginning when Hugo Gernsback founded Amazing Stories in 1926, and virtually created modern science fiction. Nearly simultaneously, Weird Tales (founded in 1923) was publishing the first stories of the greatest fantasists of the 20th Century: Robert E. Howard, H.P. Lovecraft, and Clark Ashton Smith.

So I was delighted to discover a brand new magazine devoted to covering the birth of modern science fiction: Futures Past: A Visual History of Science Fiction, edited by Jim Emerson. The first issue of this 64-page, full color magazine, subtitled 1926: The Birth of Modern Science Fiction, appeared in July 2014, and is now available in e-book PDF format. Future issues will cover the whole field of science fiction — including magazines, books, movies and conventions — year by year, in an attractive and easy-to-read format.

Here’s the description of the entire undertaking from the publisher:

Welcome to one of the largest and most ambitious projects ever attempted in the field of science fiction.  In the pages of Futures Past we will be covering, in detail, the birth and development of modern science fiction over its first 50 years – from 1926 to 1975. Designed in a yearbook format, each issue of Futures Past will cover all the works, people, organizations and events in detailed chronological order.

Relive novels such as Last and First Men, Galactic Patrol, and When Worlds Collide all the way to more recent classics such as 1984, Dune, and The Left Hand of Darkness.

Follow the early careers of legends such as Bradbury, Clarke, Heinlein, Sturgeon, Asimov, Leinster and many others, year by year, story by story and novel by novel…

Yes, every book, every magazine, every film, convention, and so much more! Futures Past is dedicated to all those amazing people who helped to shape our modern world by giving us a sense of wonder, by showing us possible futures and addressing social issues long before they touched the mainstream, and by simply daring to ask, “what if…” Our goal at Futures Past is to keep alive the people, works and memories of a great genre and introduce them to a whole new generation of readers, thinkers and dreamers.

When completed, this series will be the most comprehensive history of the field ever undertaken.

The magazine’s website offers a peek at the contents with a scrolling preview of issue 1, and it looks terrific. Here’s a sample of just a few of the pages, showing the issue-by-issue Amazing Stories survey: 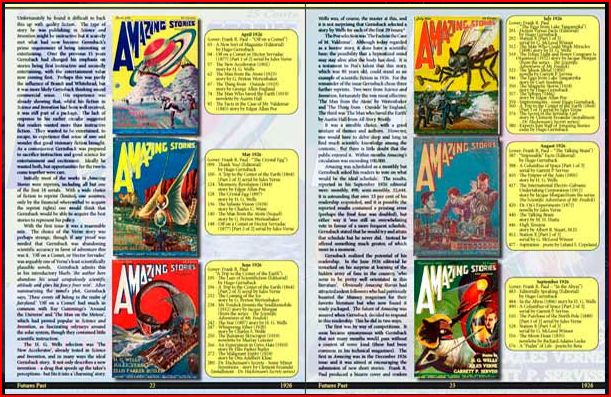 As well as the section covering Weird Tales and other fantasy pulps: 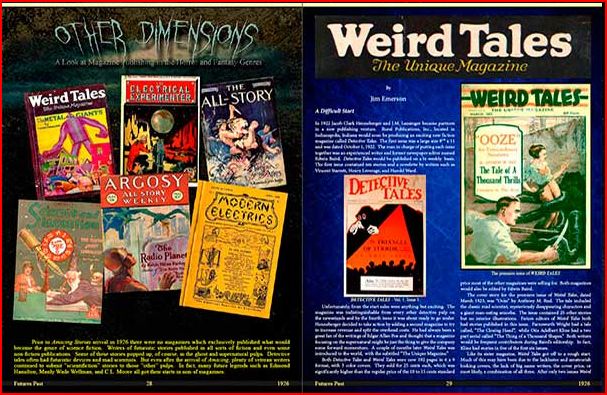 And the section looking at the major book releases of the year: 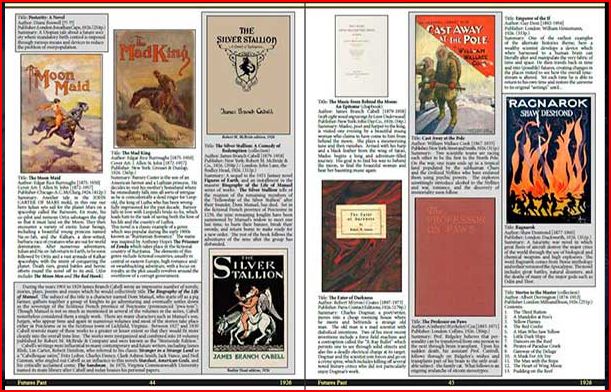 Writers for this issue include Mike Ashley, with two excerpts — one from Gernsback Days, and one from his excellent ongoing history of science fiction magazines, The Time Machines: The Story of the Science-Fiction Pulp Magazines from the Beginning to 1950 — and Black Gate ‘s own Bud Webster, with an excerpt from Bud’s book Past Masters, the chapter on Murray Leinster. 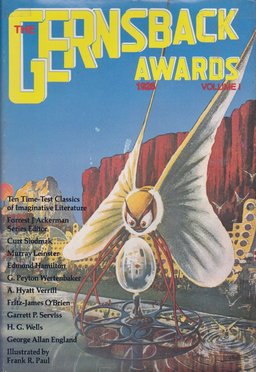 The first issue of Future Past is available now for $6.00. The publisher has also announced that, due to unexpectedly high demand for a print edition, they are looking into alternatives to produce physical editions as well (including Kickstarter).

Futures Past was announced as a quarterly, but so far has published just the one issue. Order copies or check out the complete preview at the website here.

If you’re interested in the earliest days of the science fiction and fantasy pulps, I also recommend our previous articles:

The Gernsback Awards, Volume One
The Professor Jameson Space Adventures by Neil R. Jones
See a 1942 Pulp Magazine Rack in All Its Glory
The Original Bug-Eyed Monster: Astounding Stories, May 1931
Vintage Treasures: Science Fiction of the 30′s edited by Damon Knight
The Fantasy Fan
A Contemporary Eye on the Pulps: Fantasy Review, April-May 1949
Discover the 20th Century’s Great SF & Fantasy Writers with Bud Webster’s Past Masters
The Man From Mars: Ray Palmer’s Incredible Pulp Journey
Experience the Joy of the Pulps With The Incredible Pulps
When the 21st Century was Far Future: Frank R. Paul: The Dean of Science Fiction Illustration
Cult Magazines: A to Z
TSR’s Amazing Science Fiction Anthologies
Isaac Asimov’s Before the Golden Age

[…] month I was delighted to shine a spotlight on the first issue of Futures Past, a new magazine devoted to covering the birth of modern science […]