We live in an age of reboots. I for one think this is an excellent thing. Most of the great of history has fallen into the category of reboots, retellings, recapitulations and reimaginings.

Without the concept of fanfic there is no Aeneid, and while many a college Sophmore may rejoice at that idea, world literature would be the poorer for it. That is, as well, what Ovid is doing with the Metamorphoses. He’s compiling and retelling, weaving several hundred different strands together into one long rope of story. And that work is still bearing fruit today.

One of the better and most wideley known tales that Ovid retells is the myth or Orpheus. This one is so commonly read that I’ll just sketch down the bones here: Orpehus was the greatest musician who ever lived. He was married to a young woman named Eurydice, but she died very soon after the wedding. Heartbroken, he made his way down to the Underworld, and with the power of his music, convinced Hades and Persephone to let Eurydice come back to the light. They agreed, the only time in all of history they have done so, because they were so moved by his music. But there was a condition: Eurydice would follow him up to the surface, and he couldn’t look back once.

He did, of course, and off Eurydice went to Hades. Orpheus meanwhile took up wandering the earth with his lyre, only to be torn to bits a roving band of Maenads when he refused to celebrate with them.

The story of Orpheus has a very long tradition, tied into ancient mystery cults (probably teaching people how to get safely through the land of the dead), early Christianity (charismatic young men rising from the dead all had something to do with each other at one point or another) and the early history of High Magic. But for now, I want to talk about Orpheus in the last couple centuries.

Because for whatever reason, he has been immensely popular lately. 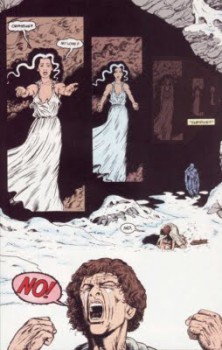 One of my favorite appearances was in Neil Gaiman’s Sandman, where he was the son of Morpheus and Calliope. Orpheus’ fate played into the ongoing family struggles of The Endless and the ultimate fate of Morpheus himself.

Orpheus’ tale is retold as well in Black Orpheus, which sets the myth against Brazil’s Carnivale (which I can’t speak to nearly as much as I’d like: it’s been on my to watch list for a decade now). This film in turn inspired Baz Luhrman’s  Moulin Rouge.

Ok, if that last one made you cock your head in confusion: Christian is Orpheus, Satine is Eurydice, the Duke is Hades, and the Moulin Rouge itself is the Underworld. Watch it (or even just the last ten minutes) with that in mind: in the closing scene, Christian leads Satine back towards the stage lights. She stumbles, and as he turns back to look at her, she drops to her knees.

Orpheus’ most recent appearance, and one perhaps best suited to his particular talents, comes in the form of a folk musical by Anais Mitchell called Hadestown. This dust-bowl themed album sees Persephone (sung by Ani di Franco) as a jaded matron running a speakeasy:

“I got the wind right here in a jar
I got the rain on tap at the bar,
I got sunshine up on the shelf,
Allow me to introduce myself…” (Our Lady of the Underground)

But best of all (to my taste) is “Wait for Me”, in which Orpheus (sung by Bon Iver’s Justin Vernon) received the directions to Hadestown from an Apollo who whispers rather than sings. It’s a creepy, dusty piece that manages to wrap up hope and despair in a spectacular three minutes.

All of these pieces are amazing. They’re not stale recycling. So I argue that our current love of the retro, the nostalgic, isn’t a sign of creative burnout or lack of ideas. It’s the precise opposite. It’s a culture that is finally coming into its own, that has a new set of toys to play with and a new set of tools that it wants to break out and try new tricks with. The internet has made the wealth of human knowledge and art available to everyone and opened up massive new avenues of artistic and creative play.

It’s a wonderful time to be alive.

Very interesting take. I’ve heard similar arguments but none that make it as well or succinctly as you do here.

The reference to Moulin Rouge called to my mind the 19th century operetta by Offenbach: “Orpheus in the Underworld”. This turns the Orpheus myth on its head, with Eurydice happy to live in the underworld. The gods on Olympus are so bored that they too want a little fun and go to the underworld. At one point, the gods and goddesses dance an infernal gallop – better known to us as the Can Can tune. Orpheus and Eurydice can’t stand each other and it is only the minor goddess Public Opinion who persuades him that he needs to lead her back to the land of the living. Jupiter intervenes by throwing a thunderbolt, so Eurydice returns to happiness in the underworld and the opera ends with a reprise of the Can Can. I saw the whole thing once, done by fellow music students when I was at university in the 70s. It was great fun. Neil

Black Orpheus amazed me beyond all adjectives. Go watch it. Just go watch it. Have a box of tissues handy.

NeilH., your description of the Offenbach operetta was so zany, I had to go to Wikipedia to see if you were pulling our legs. Now I need to see that, too.