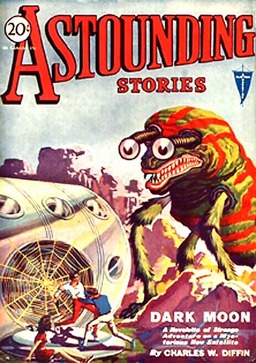 Pulps are my weakness. I discovered them when I was just 12 years old, in Jacques Sadoul’s marvelous art book 2000 A.D. Illustrations From the Golden Age of Science Fiction Pulps (which I discussed back in May). That book sparked a lifetime interest in pulp magazines, where American science fiction was born.

Of course, I was too young to have purchased or read any pulp magazines myself in 1976. Pulps died out in the 1950s, killed off by wartime paper shortages and changing economics. So I’ve relied on the collector’s market to supply me with magazines — an expensive proposition, especially if you’re a completist.

Over the years, I’ve gotten more discriminating in my collecting. I dearly love Planet Stories, Weird Tales, Amazing Stories, Thrilling Wonder, Unknown, Air Wonder Stories, and many other pulps. But my favorite is Astounding Stories (later Astounding Science Fiction), the magazine which — under legendary editor John W. Campbell — ushered in the so-called Golden Age of Science Fiction, discovering Robert A. Heinlein, A.E. van Vogt, Isaac Asimov, Theodore Sturgeon, and many, many others. Campbell became editor with the October 1937 issue and he quickly transformed the entire field.

Curiously, the most expensive and in-demand issues of Astounding aren’t from Campbell’s reign, however. They’re from its first three years, 1930-1933, the period known as the Clayton Astounding, when it was owned by Clayton Magazines. That’s their symbol, the little blue pennant, in the top right of the cover at left.

Very little fiction from the Clayton period is remembered today — and if you’ve never heard of the Clayton Astounding, you’re not missing much. The magazine’s early editors, like most of the American public, didn’t really understand science fiction and mostly filled the magazine with thinly disguised westerns in space and early space operas. But the covers… ah. They’re a very different story.

All the covers of the Clayton Astounding were painted by one man: H. W. Wesso. Like Frank R. Paul, Wesso couldn’t paint a realistic human figure to save his life. But foreboding alien landscapes, rocket ships, and giant monsters? Wesso was your guy. 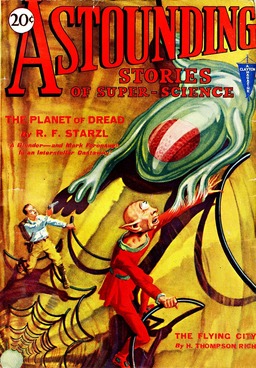 When I saw my first Wesso covers in 2000 A.D. — including the August 1930 issue, right, with that strange slithery alien coming upon the explorers in the tunnel, and the May 1932 issue, above, with a gigantic space monster moving menacingly towards three humans, one of whom is caught in a web — I was instantly captivated. (Click on the images for bigger versions).

These were the stories I wanted to read when I was twelve, dang it. Science fiction with weird alien planets, daring explorers, and monsters. In fact, forget all that other stuff, and just give me the monsters.

After 38 years of collecting, I have very nearly a complete collection of Astounding and the magazine it changed into, Analog Science Fiction & Fact. Over eight decades of science fiction, through many ups and downs. To know Astounding is, in a very real way, to know  the history of science fiction.

One that escaped me until recently was the May 1931 issue. There’s nothing special about the contents, and I have no doubt that the reason it’s much in demand is Wesso’s delightful cover.

By the 1950s, more serious magazines like Galaxy were attracting fresh readers, partly by deriding the reputation of early SF, particularly the Bat Durston space western and the “bug-eyed monsters” of early pulp SF. Pretty soon “bug-eyed monster” became a catch-all phrase for the mindless, ugly aliens who inhabited the pages of moldering pulp magazines, attempting to devour men and steal our women.

I can’t prove it, but Wesso’s monster on the cover of the May 1931 Astounding must surely be the mother of all Bug-Eyed Monsters, perhaps the very first. It’s certainly the one I think of whenever I hear the phrase. If it hadn’t been for this cover, I don’t think the phrase “bug-eyed monster” would have entered our lexicon at all.

And I don’t think it’s ugly at all. You’re beautiful, you giant alien beast, and don’t let anyone tell you different. I hope you eat that reckless space explorer, and his little blue buddy too.

Hundreds of pulp collectors clearly agree with me, since it took me a long time to track down a copy of this issue. But I finally managed it, buying a nice copy on eBay last week for $11.50.

Here’s the complete Table of Contents, with links to the stories at Project Gutenberg.

Dark Moon by Charles W. Diffin
Mysterious, Dark, Out of the Unknown Deep Comes a New Satellite to Lure Three Courageous Earthlings on to Strange Adventure. (A Complete Novelette.)

The Exile of Time, by Ray Cummings
Young Lovers of Three Eras Are Swept down the Torrent of the Sinister Cripple Tugh’s Frightful Vengeance. (Part Two of a Four-Part Novel.)

When the Moon Turned Green by Hal K. Wells
Outside His Laboratory Bruce Dixon Finds a World of Living Dead Men—and Above, in the Sky, Shines a Weird Green Moon.

The Death-Cloud by Nat Schachner and Arthur Leo Zagat
The Epic Exploit of One Who Worked in the Dark and Alone, Behind the Enemy Lines, in the Great Last War.

The Readers’ Corner by All of Us
A Meeting Place for Readers of Astounding Stories.

Astounding Stories, May 1931 was edited by Harry Bates and published by Clayton Magazines. It is 144 pages, originally priced at 20 cents. The cover and interior art is by H.W. Wesso. Read the complete issue (with Wesso’s interior artwork) at Project Gutenberg.

G. W. Thomas has put together collections of the Clayton Amazing Stories which he is giving away for free on PDF:

It is interesting to note what these stories in Astounding were like at the beginning because though Gold (editor of Galaxy) opposed such stories, he also admitted that he enjoyed reading Astounding when he was younger (he would have been 17 when this issue came out).

Another interesting piece of trivia: Gold’s first sale was to Astounding (published in the October, 1934 issue) as Clyde Crane Campbell.

Hm… wait I take that back. I think Gold was reading Amazing Stories when he was younger. Not Astounding. It’s late; my mind is getting foggy. But his first sale was to Astounding.

> G. W. Thomas has put together collections of the Clayton Amazing Stories which he is giving away for free on PDF

Thanks for the link! And those are most excellent volumes… I reported on the print editions back in 2010:

I hadn’t realized Gold had sold to Astounding. And I certainly wouldn’t be surprised to learn he read both Amazing and Astounding… there weren’t so many SF magazines that it was hard to keep up in those days.

Actually the original BEM is probably Edgar Rice Burroughs’ green Martians from “A Princess of Mars” waaay back in 1915.

You could be right. But I tend to think of “bug-eyed monster” as an artistic term, rather than a literary one. Meaning the term likely referred to popular images, rather than stories.

Is there a classic image from A Princess of Mars that showed a bug-eyed Martian?