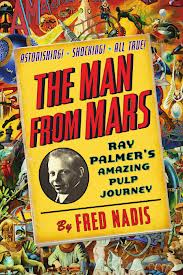 I suppose it’s only natural that I’d consider the decade of my formative years – the 1970s – to have been the “perfect” one in which to grow up. I have little doubt that those whose childhoods encompassed the ’80s or even (Merritt forfend!) the ’90s may feel the same way. They’re wrong, of course, at least if you were the kind of kid who enjoyed hearing tales of the weird, the strange, and the occult. The 1970s were alive with such nonsense, from Bigfoot to ancient astronauts to the Loch Ness Monster, not to mention The Exorcist, In Search Of, and The Night Stalker. And let us not forget that the decade also saw the popularization, through books and movies and television, of the watered-down Theosophy of the New Age movement. In retrospect, it all makes sense if you look at the ’70s as a ten-year hangover in the aftermath of the various counterculture movements that spread like wildfire during the 1960s.

For a lot of adults living at the time, it probably wasn’t pretty, but, for me, as a child with a sense that there was more to the universe than what we saw everyday, it sure was fun. Though far more skeptical today, I still retain a keen interest in such oddities, as well as the sense – or is it merely the hope? – that I was not wrong in my youthful intuition that there are more things in heaven and earth than are dreamt of in our philosophy. Like Fox Mulder, “I want to believe,” even if I find it increasingly hard to summon up the credulity necessary to do so. Perhaps that’s why, even as I scoff, I nevertheless retain a more-than-grudging admiration for men and women who do believe, often in the face not merely of seemingly contradictory facts, but also of social ridicule, ostracism, and abuse.

That probably explains why I’ve long been intrigued by “the Shaver Mystery,” which first burst upon the world in the form of the story “I Remember Lemuria,” published in the March 1945 issue of Amazing Stories. The story purports to be an ancient, first-person account (preserved in “thought records”) of an advanced subterranean civilization that once existed on Earth and whose remnants continue to have intermittent – and often unpleasant – contact with the surface.

“I Remember Lemuria” was based on ideas proposed by Richard Sharpe Shaver (whose name became inextricably linked to them) and given final form by Ray Palmer, editor of Amazing Stories. It was the first of several stories published in the pages of Amazing between 1945 and 1949, during which time the magazine’s circulation soared. As recounted by Shaver, a would-be artist and factory worker with a history of psychiatric problems, the Earth was once inhabited by extraterrestrial beings who built vast cities underground. When they abandoned the planet eons in the past, they left behind some of their degenerate offspring, known as the deros (a contraction of “detrimental robot”). The deros treat humans as cattle, kidnapping them for food and experimentation. Shaver claimed to have been a prisoner among the deros for eight years, during which time he learned much about them and the true history of the Earth. 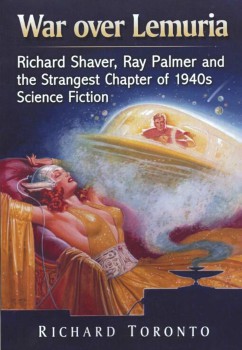 The tale of how Shaver and Palmer came together to propagate these wild ideas is the subject matter of two different books published last year: The Man from Mars by Fred Nadis and War over Lemuria by Richard Toronto. Neither book is “scholarly” in the sense of being academic in tone or orientation, but both provide ample documentation from primary and secondary sources. They are thus “popular” in their overall approach, while at the same time offering up plenty of information for those interested in delving further into these matters. More importantly, I think, both books are sympathetic to Shaver and Palmer. That’s not to say they’re uncritical – Nadis in particular is more than willing to take the two men to task for their failings and missteps – but neither is their intention to make the them look like fools, no matter how bizarre the theories they were propounding.

What’s fascinating to me is that both Shaver and Palmer genuinely seemed to believe in the mystery they were presenting. Both spent the rest of their lives explaining it and building upon it, in the process creating a mythology of great complexity and depth. Indeed, that mythology proved to have remarkable staying power, influencing many other mythologies, echoes of which I still heard in my own childhood during the 1970s. “The Shaver Mystery” clearly spoke to people, some of whom not only found it intriguing but also came to believe it, or some version of it, themselves. Shaver Mystery clubs and fanzines appeared across the world. Their existence and impact was significant enough that science fiction fandom itself was convulsed throughout the 1940s and ’50s with pro- and anti-Shaver camps. Both Nadis and Toronto recount these intramural battles with interest, serving up a reminder that the querulous nature of fandoms is not an invention of the Electronic Age.

As I said, I’m too much of a skeptic to take “the Shaver Mystery” seriously, but I can’t help but be attracted to it nonetheless. I realize that the vehemence with which a madman clings to his beliefs is no guarantee of its truth. Yet, there is something compelling, at least to me, about individuals who hold fast to notions that most of us would reject out of hand. Whether you’re interested in fringe theories, the cultural history of science fiction and fantasy, or, like me, have a soft spot for crackpots, both The Man from Mars and War over Lemuria are good reads and well worth your time.

I read and reviewed The Man From Mars over at Amazing Stories earlier this year.

I wasn’t as impressed with it as you were. I think I was expecting a more serious and scholarly work, which as you correctly point out, it wasn’t. It does present a portion of the field’s history that many today may not be familiar with.

I have a copy of War Over Lemuria but haven’t read it yet. Your post brought it back to mind, so thanks for the reminder that I need to.

And I agree with your comments on the 70s completely. I used to see copies of Fate at drug stores and the small grocery near our house all the time.

[…] interested in more on the Shaver Mystery, our own James Maliszewski addressed the topic in his joint review of War over Lemuria, and the Palmer bio The Man From […]