The Worlds of Fritz Leiber (Ace, 1976). Cover by Patrick Woodroffe

Fritz Leiber died 30 years ago, in 1992, but he’s in no real danger of being forgotten. His Fafhrd and the Gray Mouser stories remain poplar and are still in print, and so are many of his acclaimed novels and collections.

I wish more of his work was readily accessible to modern readers though, like his splendid 1976 collection The Worlds of Fritz Leiber. In his introduction Leiber said “I believe this collection represents me more completely… than any other,” and it’s not hard to see why. It contains both of his 60s-eras Dr. Dragonet adventures (“The Goggles of Dr. Dragonet” and “Far Reach to Cygnus”), a tale in his ambitious Change War time-war series (“When the Change-Winds Blow”), one Fafhrd and the Gray Mouser story (“The Bait”), and his Hugo and Nebula-awarding winning “Catch That Zeppelin!” 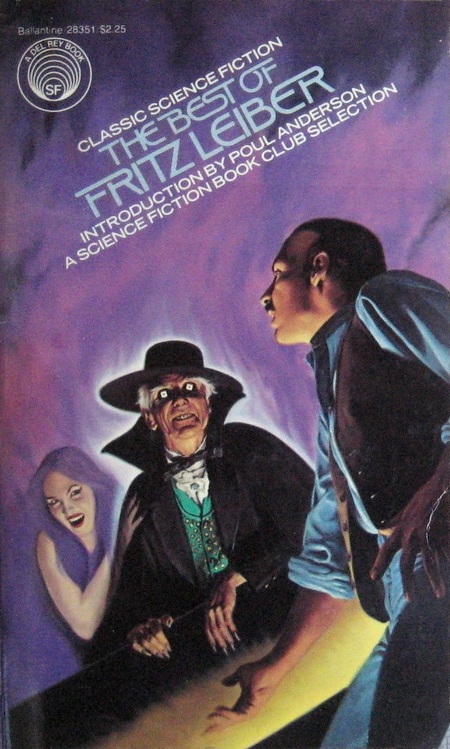 The Worlds of Fritz Leiber has precisely zero story overlap with his 1974 volume The Best of Fritz Leiber (which James McGlothlin reviewed for us here), and that’s pretty amazing — and also deliberate. Quoting again from Leiber’s introduction:

I believe this collection represents me more completely, provides a fuller measure of the range of my fictional efforts, than any other. I’ve tried to make it that way, without repeating stories from other collections, especially the ones currently in print. There no overlap with those whatsoever. (Overlapping collections are an annoyance to readers and authors alike.)

For the completists in the audience, other Leiber collections in print in the mid-70s included five volumes of Fafhrd and the Gray Mouser tales, two volumes of The Book of Fritz Leiber (1974 and 1975), Night Monsters (1974), and others.

It’s extremely impressive that he was able to assemble a collection like this with virtually no overlap with those books.

There’s been plenty of coverage of The Worlds of Fritz Leiber since it was first released over 45 years ago. But I think my favorite is Jerry Stratton’s Goodreads review from 2021, which comments on virtually every story. Here’s an excerpt.

“Pipe Dream” opens up with [a mermaid in a bathtub]… and only gets stranger from there. It’s basically a family of Slavic superheroes, escaping Soviet oppression, doing experiments on their own family in the midst of New York City.

The stories contain the combination of amazing optimism and nuclear-war pessimism that seems to permeate stories of the era. In the 1957 “Friends and Enemies” there’s been a nuclear semi-apocalypse around 1994. People live in enclaves, hate the physicists who they believe caused the war, and yet continue to feed off of the output of Hollywood, which has moved from talkies through 3Ds and into feelies. Among the other technologies almost taken for granted in this dying world are jet automobiles that were introduced in 1980. In the midst of pessimism, Leiber could not jettison all of his optimism. I find that these types of stories are pessimistic now not because of the pessimism on their surface that never came true, but because of the optimism they still retained that never came true.

Besides “Pipe Dream”, the second highlight is “When the Change-Winds Blow” about a man living on the Martian frontier (also after a nuclear holocaust).

Other highlights include “237 Talking Statues, Etc.”, about a man living with his mother—and with 237 statues haunted by his dead father; “Cyclops”, about a far expedition to Jupiter and speculation on the most alien of alien races; “Night Passage,” about a chance meeting with an alien in Las Vegas that fits the Las Vegas mystique exactly; and “What’s He Doing In There?” which could just as well have been titled “Whose taboo are we talking about, anyway?” about an alien going to the bathroom immediately after first contact. The scientist initiating the first contact has no idea how to interact with an alien on the other side of the bathroom door.

Here’s a look at some of the magazines and anthologies these stories first appeared in. (Click the covers for bigger versions.)

Certainly the story that’s generated the most discussion is the Hugo and Nebula Award-wining “Catch That Zeppelin!” C.L. Kagmi’s thoughtful piece on the tale is here; here’s a slice.

Written as the endearingly [self-deprecating] memoirs of an aging man who admits that he may be getting just a bit senile, our narrator’s description of “a vivid waking dream” he had turns into a vivid description of a timeline in which just a few historical events went just a bit differently from our own.

I won’t spoil all of the differences, but I will say that our narrator, a middle-aged fellow living in New York City in the year 1939 inhabits, for a few glorious hours, a world in which cars are powered by a cleaner form of energy than gasoline; in which the civil rights movement went just a bit differently from the Civil War on; a war in which World War I went very differently, and as a result the Nazis never rose to power in Germany.

As a result, our hero dwells for a few bright hours in a New York City where the air is clean and the streets are quiet; the people are courteous, and black and white folks alike stride with quiet confidence and are treated with deference in the most luxurious accommodations – including the exclusive German restaurant at the mooring point for Germany’s great fleet of safe, non-polluting passenger zeppelins at the top of the Empire State Building.

In this recollection of a past that never was, we see a reflection of what may yet be. Although we now stand forty years distant from this story’s 1975 publication, and eighty years distant from the era which its narrator describes, perhaps we can still learn a thing or two from the choices that were made – and why they were made differently in this alternate history.

Here’s the complete table of contents for The Worlds of Fritz Leiber. 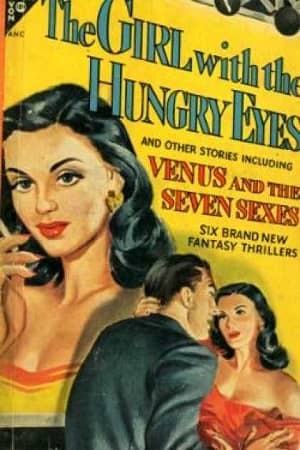 The Worlds of Fritz Leiber was published by Ace Books in November 1976. It is 344 pages, priced at $1.95. The cover is by Patrick Woodroffe. It was reprinted in hardcover by Gregg Press in 1979, and had been out of print for over four decades. There is no digital edition.

One of the greatest of the Great Old Names. I had the pleasure of meeting him at the Change of Hobbit book store in Los Angeles in the mid 70’s and having some books signed by him. I will always remember his kind, attentive manner as we chatted. (I couldn’t believe that he actually wanted to have a conversation while he signed my paperbacks – I was so taken aback that I stammered like an idiot.)

Wow! I’ve met a handful of my writing idols, but I never met Leiber. I envy you!

I just want to say your pages on short story collections have been very useful for me. I wish I’d discovered this place sooner. It would’ve saved me many hours of sifting through reviews on Amazon and Goodreads.

Glad to be of service Lee! What anthologies and collections have been your favorites?