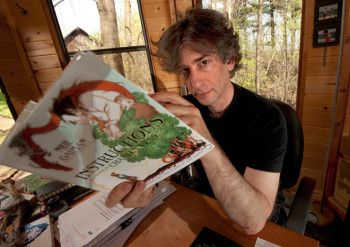 Neil Gaiman and I have a strange relationship, that being that we have no relationship whatsoever. That said, I take full responsibility for our lack of communication as the first time I turned my nose up at speaking privately with Neil was back in 1993 at the Diamond Comic Distributors convention in Atlanta.

So there I was, two floors above the off-entry lounge and looking over a railing when Neil, in his usual black, walked into the empty square couches all alone, kicked up his feet, and just sat there for a full twenty minutes without a soul coming to disturb him. Sure, I could have gone to the elevator behind me, traveled down and taken a seat, asking Neil how it felt to have Tori Amos sing about hanging out with him and the Dream King on her Little Earthquakes album, but no, I just wasn’t that into doing so. [Perhaps the most intriguing part of this tale is that I timed his small respite from the convention crowds on my wristwatch, and neither he nor I had the use of a smartphone to keep our attention… ah, what a massively different world we once lived in!]

Fast forward to San Diego and the 2011 World Fantasy Convention. Again, fate would put me in Neil’s path, this time after he’d given a secondary non-sanctioned signing session when the convention had forced him to close his first one because it went too long. Between restaurants, Neil took a moment amid the palm fronds to collect himself as the convention broke down and people said goodbye around his private island unaware. Me, having said farewell to my Black Gate crew, witnessed this act of peaceful contemplation and decided yet again that Neil and I just weren’t in the right place for a confab.

Thus, I guess I’ve got another decade or so before Neil and I once again run into each other, and I can’t say that I’ll act any differently because more often than not, Neil and I just don’t see eye to eye.

That said, there are those choice moments when I do ‘feel’ Neil, when he takes a certain subject and just nails it, like this commencement speech from the University of the Arts, Class of 2012. The power of that particular twenty minute offering is impressive, but the spoken word often loses focus at length with only choice bits being remembered [such is the beauty of the Gettysburg Address].

However, prior to this impressive gift of knowledge to a group of graduates, Neil found another moment that resounded with me in 1997. This time, however, it was written, and the power of it can be read below.

Before I release you to Neil’s brilliant insight in this matter, however, let me frame this a bit. At some point, White Wolf Publishing decided that it would be a good idea to collect the works of Fritz Leiber’s Lankhmar and put them out in a three volume set [fantastically rendered with art by artist Mike Mignola]. It was in the third volume of this set, Return to Lankhmar, that the editorial department decided to ask Neil for a blurb about Leiber’s work.

What followed is something that I truly enjoy, not only because it is stupendous introspective writing, but because I love nothing more than seeing the inner workings of an author or editor’s mind in notes found somewhere in a book.

With that lead in, I give you an excerpt from the beginning of Neil’s introduction, and will follow up afterward.

“It is too often a sad and unwise thing to go back and read a favourite book.

Favourite books are the treasure-chests of memory: just thinking of the book evokes the place you read it, the circumstances under which it was read, the music you were listening to, and most importantly, the person you were, when you read the book first. 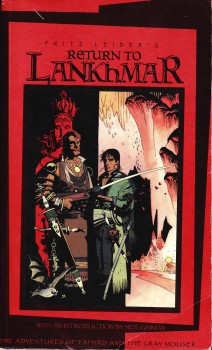 Some of these books should not be revisited. It is not wise. A book is a place, after all, particularly when one is young: somewhere to which one goes while one is reading. And, like all places from one’s childhood, the action of revisiting is one fraught with strangeness and danger.

Some places shrink (“I used to walk along that wall. And I was scared of falling off. But it’s only a foot high.”); some places change (“That tree wasn’t there when I was growing up, was it…?”); some places simply aren’t there anymore, taken by time or distance or decay (quiet meadows in which I lay and read as a boy are now covered with row after row of identical houses).

It’s the same with the books you remember. They shrink, some of them. Or they change (“I don’t remember that chapter at all,” you mutter to yourself, puzzled). And worse, as you grow up you carry with you, for example, the memory of our heroes’ terrified flight through the forest that awful night, the way the wind whipped and howled through the oak trees, the way the rain soaked through their clothes; you remember the water dripping from their faces as they urged their poor exhausted horses on through the night, the twigs that slashed and cut their terrified faces, the steam that rose from the horse’s flanks… And then you go back to the book, years later, and you discover that the whole sequence was a sentence along the lines of: “It’s jolly wet tonight,” said Bill to Bunty, as they urged their horses through the dark woods. “I hope they don’t catch us.” You did the rest of it yourself. Those are the ones to which you wish you never had gone back.

And then there are books that, when you try to go back and reread them, just aren’t there at all. (Sometimes the book is out of print, or unidentifiable. In the saddest cases they took your book and rewrote it, edited it or heavily abridged it – a dreadful and pernicious practice. I’m still looking for an original version of Noel Langley’s The Land of the Green Ginger.)

Some books, however, like some places, are safe to return to. They welcome you back. They aren’t as good as you remember: they’re better. You appreciate them in way you never could have done when you were younger.”

Having become an advocate for Goodreads, I’ve found myself going back and revisiting not only books I loved, but also books that just never made it fully to my ‘ready room’. The above insight of Neil, most times unfortunately, has become truer and truer with each old classic novel brought back before my nostalgic eyes.

Nonetheless, Neil is correct in his assessment that there are those few choice books that still hold the wonder, and I thought that I’d like to ask those reading this, if any of you have made it this far into the meat of this post, what books have you gone back and read again, years later, only to find them better or worse than you remember.

If you are so inclined, please include them below, and also, I hope you’ll give another look at my current Kickstarter project as there are only 10 days left and we are looking for as much support as we can get from lovers of literature and art who come to Black Gate and enjoy all the posts provided here.

If you like what you read in Art of the Genre, you can listen to me talk about publishing and my current venture with great artists of the fantasy field or even come say hello on Facebook here. And my current RPG Art Blog can be found here. Also, for my hardcore fans and those that love small press books, I’ve launched my latest crowd-sourcing campaign that I’m determined to see become the most successful fantasy fiction Kickstarter of all time, so come help me and all my artist and writer friends create a franchise to remember!

I devoured the Doctor Doolittle books as a young boy. As a young man, I picked the first one up for a return visit, found to my disappointment that I could barely tolerate a chapter or two. Nearly another two decades have passed since then, though, so who knows how they would receive me now?

Tolkien’s LOTR is the one for me that just seems to grow with each return visit. Every time I read it, I am more in awe.

Nick: Thanks for reading and posting. Never read Doolittle, but dang LOTR is something that just gets better for me as well, currently reading The Hobbit for the third time this year alone! 🙂

This has been my year to revisit books I haven’t read in a long, long time — LotR (last read in 2004-2005), the first couple of Lankhmars, coincidentally enough, Downbelow Station and some Jack Vance, amongst others — in some cases it’s probably been 15-20 years since I last read them. I’m pleased to say that so far everything has held up admirably.

I had the same experience with the Doolittle books. I can see why I liked them in the first place, but they just don’t do anything for me now. Too twee.
Fafhrd and the Grey Mouser definitely hold up, but some of the other work now has a dated feel.
Strangely, Rex Stout’s Nero Wolfe books hold up very well, and repay rereading.

[…] Art of the Genre: Looking Back at Old Readings with Neil and Fritz Leiber […]