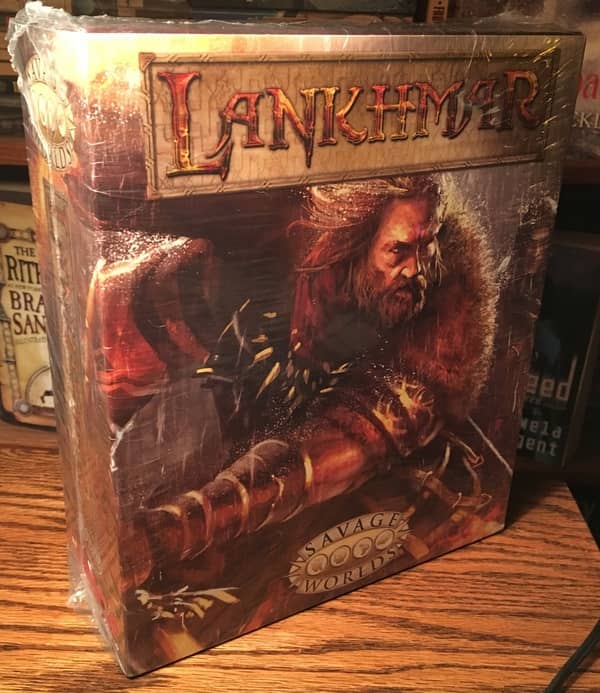 Back in October I splurged on the Lankhmar Collector’s Box Set, a massive collection of setting material for the Savage Worlds core ruleset from Pinnacle Entertainment Group. It was a $70 indulgence, but I ended up being very happy with it. Partly because it’s the size of a giant brick and looks stately and awesome there on my end table. I mean, just look at that thing.

I had to educate myself a little bit to understand what the heck I’d just purchased, though. I thought Savage Worlds was, you know, a role playing game, like Dungeons and Dragons and Dallas. Turns out it’s a lot more than that. According to the two hours of research I just did, Savage Worlds is the umbrella ruleset for all of Pinnacle’s roleplaying titles, like their supernatural pirate game 50 Fathoms and their SF setting The Last Parsec, as well as their classic game conversions, including Rifts, Deadlands, and Space 1889.

I’m not precisely sure how many settings and adaptations are out there are but, man, there’s a bunch. Here’s a partial list. Bring a snack, ’cause it’s going to take a while to get through it.

Okay, that’s more than enough for now. Pinnacle typically does several releases in support of each setting. Recently they’ve been packaging them up in attractive (and huge) bundled collections that are irresistible to weak-willed collectors such as myself, like the boxed sets for Rifts, The Last Parsec, and Weird War I. 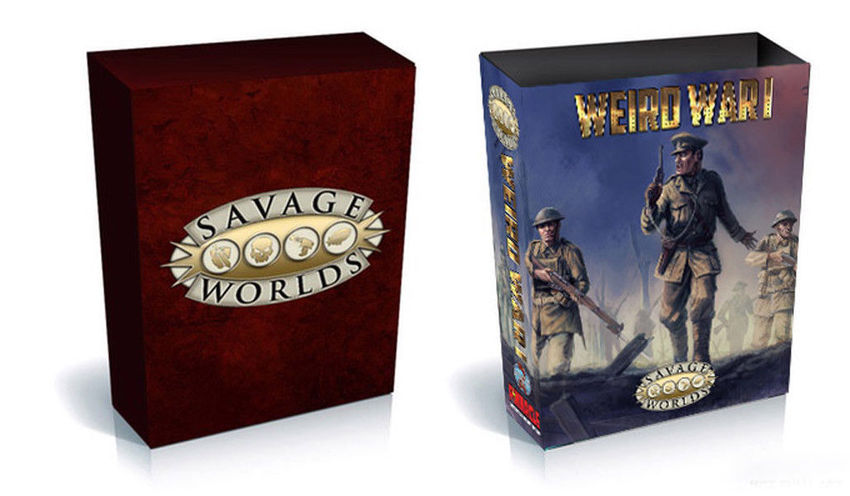 The latest is the Lankhmar Collector’s Box Set, which assembles three premium books for their Lankhmar – City of Thieves core setting, plus a map set, a GM screen and adventure pack, and more. It’s all set in Fritz Leiber’s Lankhmar, perhaps the greatest city in all of fantasy.

Leiber created Lankhmar in 1937 in collaboration with his college friend Harry Fischer as part of an elaborate fantasy board game. It achieved true notoriety as the setting for his Fafhrd and the Gray Mouser tales, eventually collected in six volumes by Ace (below). They include the famous novella “Ill Met in Lankhmar,” which won both the Hugo and Nebula Awards. 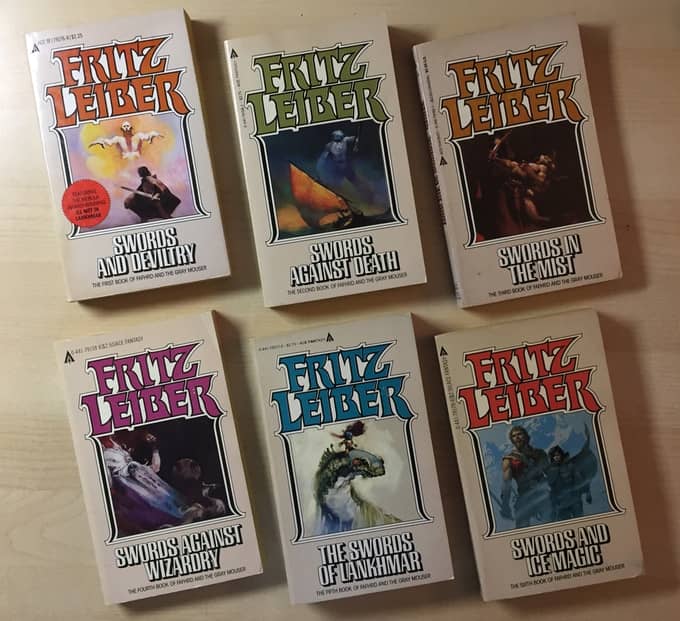 Pinnacle describes the city succinctly in their Lankhmar product page.

In the City of Sevenscore Thousand Smokes, danger lurks down every dark alley. Sinister sorcerers summon terrible forces in their crumbling towers. Treacherous rogues of the Thieves’ Guild prowl the Plaza of Dark Delights. Assassins from the Slayers’ Brotherhood work the Tenderloin District. And hunched figures skitter beneath the streets, waiting for their chance to rise.

But there is action, adventure, and wealth here too – if your rogues have the skill and bravado to claim it!

The Lankhmar Collector’s Box Set contains most (but not all) of their current Lankhmar product line, including softcover editions of the following books:

Here’s a closer look at the individual books (click for bigger images).

While the material is richly detailed, it is not a complete system. To make use of the Lankhmar materials in the box you’ll need a copy of the Savage Worlds rules set.

Lankhmar has a rich history as a game setting, and Pinnacle isn’t the first company to adapt it — in fact, they’re not even the most recent. Goodman Games wrapped up an ambitious Kickstarter to adapt it for their Dungeon Crawl Classics game in 2017, with over $187,000 pledged. The boxed set is due in August of 2018. 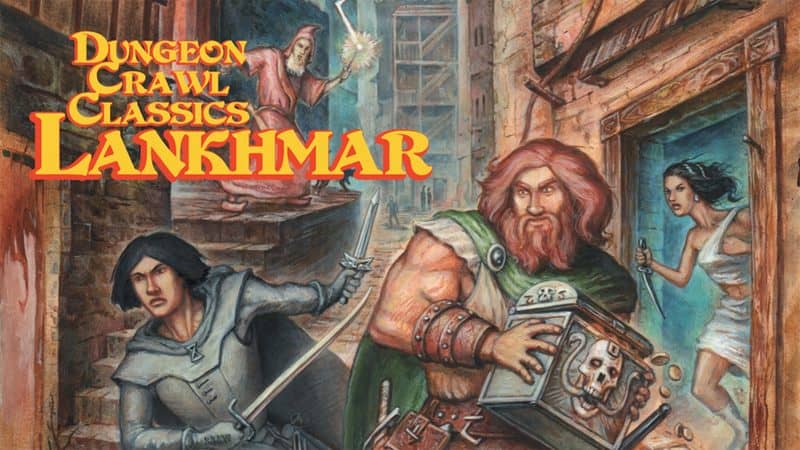 In the meantime, designer Michael Curtis has released three slim adventures for DCC, including Through Ningauble’s Cave, which I bought last weekend at the Goodman Games booth at the Windy City Pulp & Paper Show.

All this love for Leiber’s creation isn’t a recent thing, however. The first Lankhmar RPG supplement, Lankhmar City of Adventure, was released over thirty years ago as an urban setting for Advanced Dungeons and Dragons. It was published in 1985 by TSR.

Lankhmar City of Adventure was truly a landmark work, one of the first great city adventures and one of the first successful licensed adaptations for AD&D. It included a gorgeously detailed fold-out map that was a wonder for any fan of Leiber’s sprawling fantasy metropolis. 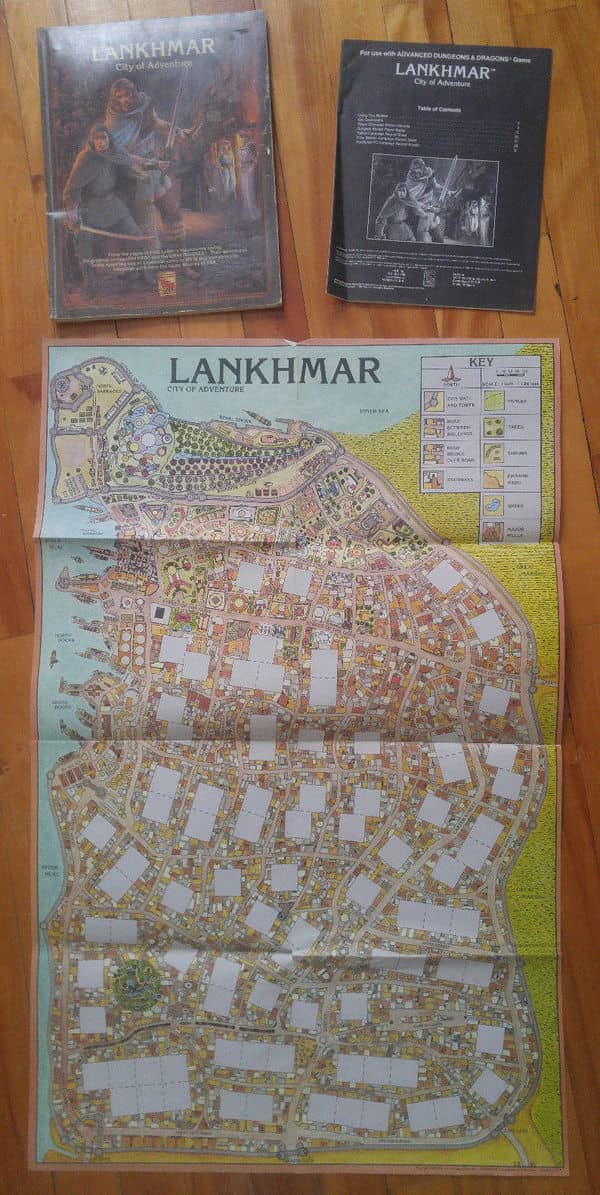 Michael Curtis and his team at Goodman Games were well aware of Lankhmar’s gaming pedigree, and in his Kickstarter updates he committed to produce a final product of comparable quality.

Lankhmar City of Adventure was the first RPG supplement to be based on Leiber’s stories. This was our gold standard during the design of DCC Lankhmar. We knew if we could produce a game at least as good as this book, we’d hit our mark.

Lankhmar City of Adventure was updated and expanded in a 1993 edition compatible with Second Edition D&D. In 1996 TSR released a brand new and more ambitious product, Fritz Leiber’s Lankhmar: The New Adventures of Fafhrd and Gray Mouser, not just a D&D supplement but a complete standalone RPG tied in to Leiber’s sprawling city. All you needed to play it was dice.

Here’s a look at the contents of the boxed set. 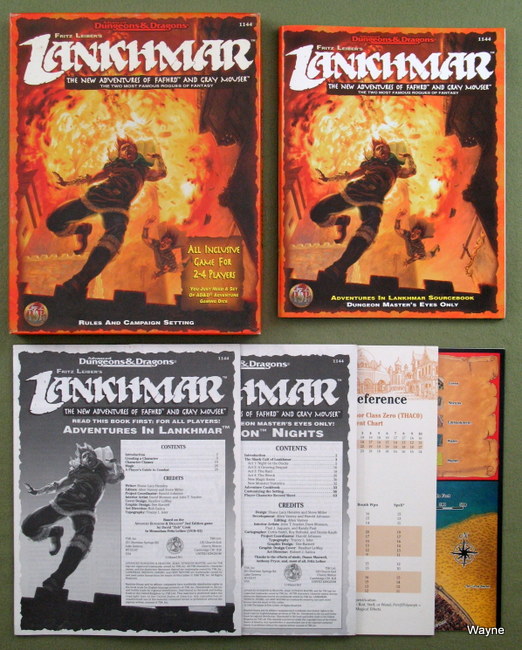 Both of the TSR Lankhmar products are long out of print and in high demand with collectors. If you’re looking for copies in good shape, expect to pay a premium.

Proving that D&D wasn’t the only game in town, Mongoose produced a handsome line of RuneQuest compatible Lankhmar products in 2007. These 160-page hardcovers are well worth a look. At least some, including  Lankhmar Unleashed, are still in print and are relatively inexpensive.

Finally, for the true collectors in the audience, unquestionably the rarest Lankhmar gaming collectible is the 1976 Lankhmar board game, the only existing incarnation of Harry Fischer and Fritz Leiber’s 1937 tabletop original. One of TSR’s first fantasy releases, it was not a success, and is a tough find. I paid $75 for the unpunched copy below in the early days of eBay nearly 20 years ago, and then bought a second played copy for much less. It’s hard to find copies in any condition these days. 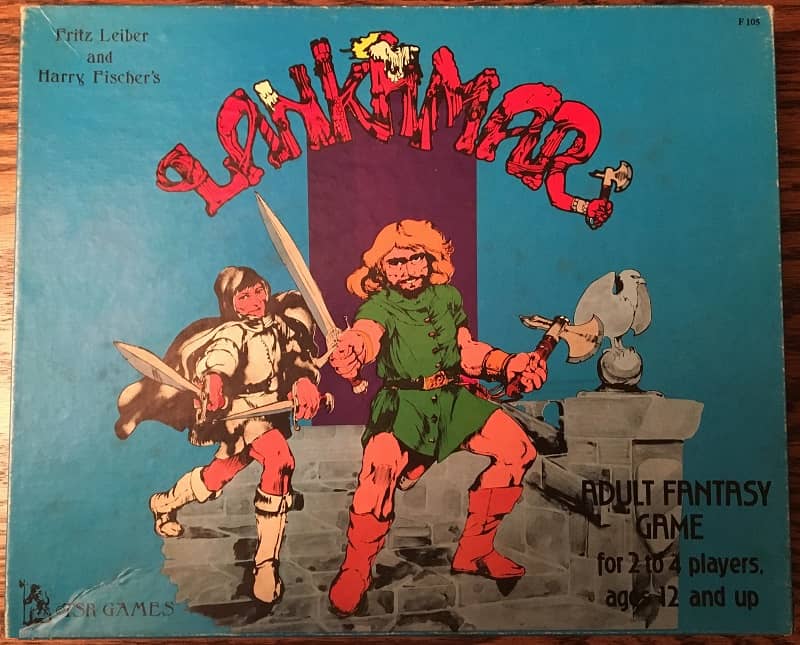 Lankhmar is an “Adult Fantasy Game” for 2-4 players, each of whom controls a hero (Fafhrd, the Gray Mouser, Pulgh, or Movarl) and one of the armies of Nehwon. The objective — to capture your opponents’ citadels — makes little sense in the context of the fiction, but was a comfortable fit with 70s board game logic. The mechanics of the game are simple, but they do draw on story elements and characters from Leiber’s tales. For example, players may find themselves racing around the board compelled on a quest by Sheelba, Ningauble, or various gods.

Most of the components, including the playing cards and counters, are printed on very flimsy stock. But the map is gorgeous. 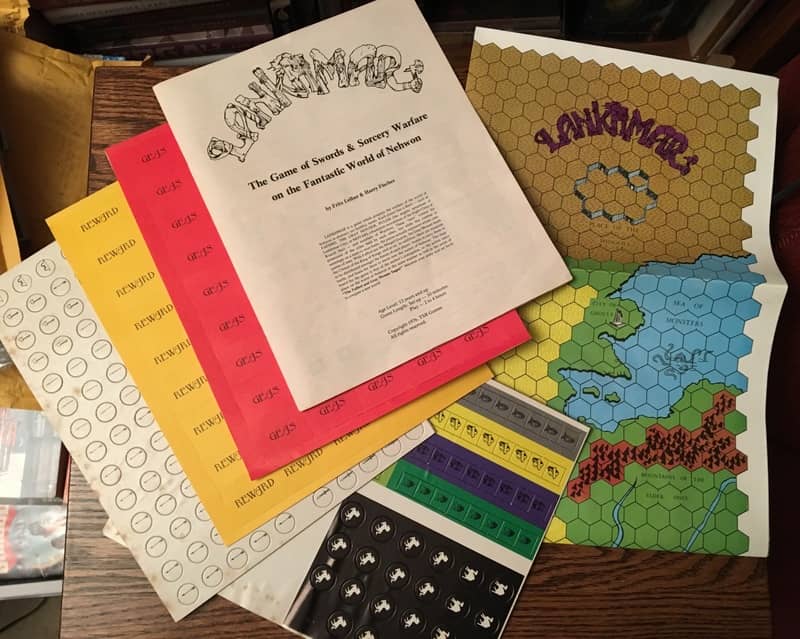 Here’s the back cover, with a better look at that funky title lettering. 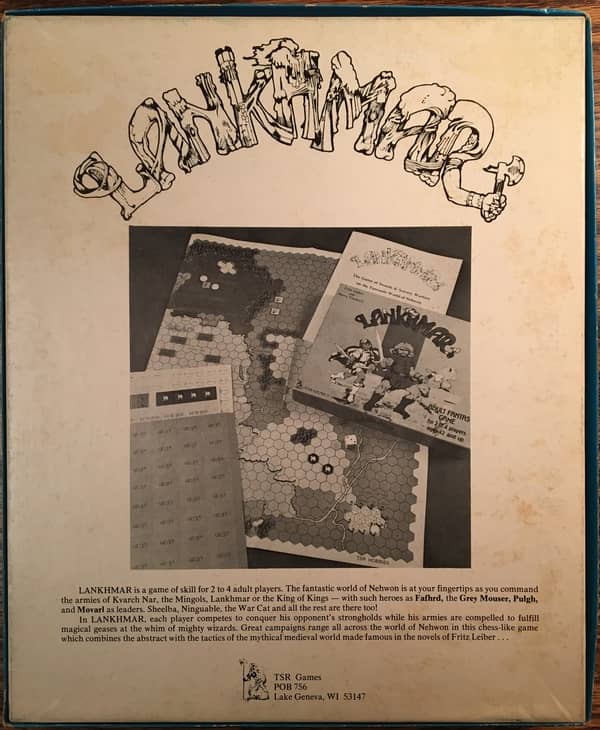 The Lankhmar board game didn’t make much of a splash, and it was never reprinted. West End Games designer Eric Goldberg (DragonQuest, Paranoia) reviewed it in the first issue of Ares magazine in 1980, and he wasn’t kind, giving it a 3 out of 9. He said:

The basic mistake committed in Lankhmar is the design approach: the stories depend on a great degree of uncertainty (or mystery), which is absent in the game.

See all of our previous coverage of Role Playing Games here.

Awesome overview of Lankhmar/Leiber in gaming history! John, I’d really love to see a picture of your entire book/game collection. I think I’ve seen a picture of part of here recently. Do you ever get worried you’ve finally reached the end of available space to store things? These days, with new gaming products, I make a serious decision about whether I need/want a hard copy. But in all reality, many of the gaming pdfs I own are regularly forgotten and never accessed. I also prefer to read a physical book than a pdf, so I’m much more likely to reach for the book on the shelf than the file on my tablet.

And I backed the Goodman Games Lankhmar box-set. Looking forward to that one!

Glad you enjoyed it! And I think you’d be disappointed with the Cave of Wonders in my basement… there are so many stacks now it’s hard to find anything! Maybe I’ll take some pics of the games in the next few months.

Thanks Bob! I was sure you’d rag me about the shrinkwrap on the LANKHMAR boxed set. 🙂

Nice informative article John. You are right that Savage World’s box looks awesome sitting there. It may look even better on my table, but I will be strong and resist, I hope. (it may be futile.)

The TSR versions looks like they took a similar approach to their Conan releases. (Ha, I beat Bob to it!) As in release an AD&D module and then based on its success launch a full fledged series.

Tempting, even though I’d never, ever do anything but read through it.

I still have the original TSR Lankhmar: City of Adventure on my shelf; I think this is the first time I’d ever heard of the earlier TSR wargame, though.

> As in release an AD&D module and then based on its success launch a full fledged series.

I suspect you’re exactly right. Something else for TSR historical scholars to argue about!

> Tempting, even though I’d never, ever do anything but read through it.

I rarely use the adventure modules I buy to game with. But I still find them great reading, and occasionally a solid source of gaming ideas.

I recently picked up used copies of the D&D 3E Underdark and War of the Spider Queen supplements solely for reading pleasure, so I know exactly whereof you speak.

Those are great picks for reading!

I still haven’t read the entirety of THE TEMPLE OF ELEMENTAL EVIL. It has a plot, sort of.

What did you think of Underdark? I really loved the artwork for that book. My thoughts are here:

I really liked Underdark although my heart will always be in Erelhi Cinlu.

I know exactly what you mean. 🙂 For years I looked forward to a return to that dark underground metropolis from its creator, Gary Gygax. But it was not to be.