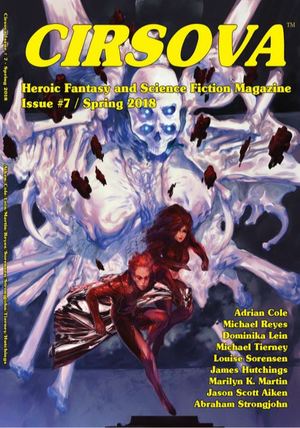 The past month saw a bumper crop of new short fiction arrive in my mailboxes, digital and physical. This time out, I looked at Cirsova #7, Swords and Sorcery Magazine #74, and the bonus story I forgot to read for my review of Tales from the Magician’s Skull.

I love Cirsova. When it first appeared two years ago, I was impressed with what I saw, and ended my review of its first issue with these words:

If this is what the first issue looks like, I expect future ones will blow me away.

Subsequent issues have upheld that initial promise, but I found this particular issue’s heavy dose of space opera and sword & planet tales not to my liking. I’m too easily bored by rockets and rayguns these days.

#7 commences the proceedings with “Galactic Gamble” by Dominka Lein. It opens with a line that demands more funny than is delivered by the story:

Space gangsters, space monsters, and even a fight in a pit did not manage to make this one a winner for me.

Returning to his demon- and monster-haunted Brooklyn, with “The Iynx.” Michael Reyes presents another story of Clock, the magical protector of Coney Island. At the center of events is the Tannin Iynx, an artifact of great power that floats around the world’s oceans, spreading madness and luring monsters.

The warlock stared at the Tannin Iynx. Its forehead was large, with flaring nostrils. The teeth in its open mouth, above its canine-like lower jaw, were jagged and fierce. There was a burgundy light flashing out from behind the whale-like eye slits, beneath those algae fashioned wings. The warlock blinked hard, and the light disappeared.

Reyes’ riotous creativity is almost overwhelming. So much weirdness goes on that, even though most of it’s explained, it’s difficult to really understand. Oftentimes, that sort of writing just irritates me, but here it’s incredibly valuable at creating the sense of a deep and dangerous world that lurks below the boardwalk and inside dirty motel rooms along the Brooklyn shore.

Post-apocalyptic America replete with mutants, wizards, and barbarians is the setting for “The Legend of Blade” by Jason Scott Aiken. Nothing original happens, though the action sequences are well-plotted and kinetic. A twist at the end is slight.

In Marilyn K. Martin’s “The Great Culling Emporium,” yet another sci-fi story, bounty hunter Jobard searches for the right weapon in a store-of-a-million-items. Later, he meets an old girlfriend and then fights a lizard man. I found this story inconsequential and uninvolving.

I might have liked Louise Soernensen’s “The Toads of Machu Hampacchu” if I’d read the story it’s clearly a sequel to. Since I haven’t, I assume it’s in the one issue of Cirsova I haven’t read, #5.

Its narrator, Darla, killed an Elder, one of a race of immortal beings from the stars. To escape its fellows’ attentions, she takes on a job as a guide for a group of travelers to the ruins of Machu Hampacchu. There are some Lovecraftian references and the titular toads, but too often the story felt as if it had been unmoored from a greater context with which I was wholly unfamiliar.

I enjoy Adrian Cole’s wonderfully psychotic Voidal stories and I liked the previous adventure of Arrul Voruum, the witchfinder, in Issue #6 of Cirsova. I do not like the new Voruum tale, “In the Land of the Hungry Shadows.” With its three chapters given the titles “Citadel of Terror,” “The City of the Mutants,” and “Under the Horns of Hell,” it should be right in my wheelhouse. Sadly, I found it slow and languorous and no number of mad sequences sped it up sufficiently for me.

“Criteria for Joining the Galactic Community” by Michael Tierney rings of the more moralizing tales of The Twilight Zone. It is short and centered on a twist that isn’t all that affecting.

The final entry in Cirsova #7 is part 6 in James Hutchings‘ ongoing epic poem, “My Name is John Carter.” As with the other chapters, this one is muscular and vigorous.

Swords and Sorcery Issue 74 was the real find this month. Despite its paltry pay rate, the magazine manages to find some very good stories from time to time. This month, one story is good and the other very, very good.

The better of the two tales is by James Lecky. Titled “The Verdigris Caper (A Small Part of the Chronicles of Runyan, Wizard of Zedikteer-By-The-Raging-Sea, as related in ancient Hep-Talk),” it’s the hilariously-told story of a penniless wizard getting dragged into a fight between the Red Sonja-like Franech the Bloody and the mighty sorcerer, Ophrel the Green.

Lecky, a veteran of several previous roundups, writes here in a fantastical take on beat and Runyonesque slangs. Women are Shebas, warriors are called sworders, and every sentence tries to swing in a hepcat sort of a way. Not every line works, but overall, it’s a hoot.

Whilst tied to a stake, Runyan schools the reader on one of the differences between wizards like himself and warriors like Franech:

Now, sensible fellows like you and I would never endanger themselves for the sake of a casual acquaintance. Moreover, a sensible fellow such as myself would not even endanger himself if his own Sainted Mamma is tied to a stake in a shrieky garden. But sworders are not like you and I – particularly not like I –  their thinking being tangled up with notions of honour and derring-do and other such concepts which tend to get a fellow ventilated.

As such it is not long before Franech the Bloody comes striding through the Garden of Shrieks, titler in hand and a determined look upon her kisser.

Yeah, I like this one a whole bunch. It might be my favorite story ever in Swords and Sorcery (it was previously David J. West’s “Ninety-nine Deaths of the Monkey God“). Over my years of reviewing, I’ve learned that most purportedly funny stories ain’t. This one is.

Issue 74’s second story is a tale that unfolds on itself. “The Maiden’s Leap” by Mike Riffe begins with young Ilsa asking her father to tell the story of Queen Vreni. It’s one of murder and maternal love. It is revealed later that Ilsa herself, unknowingly, is at the heart of Vreni’s story, which leads to the beginning of her own story. It’s not perfect, but Riffe crafts several very fairy tale-like scenes of a land corrupted by evil.

Finally, the story I forgot to read last week: Howard Andrew Jones’ “The Way of the Serpents,” from the bonus material included with Tales from the Magician’s Skull. As with “Crypt of Stars,” Jones’ story in the actual magazine, it’s a tale of Hanuvar Cabera, a S&S take on Hannibal Barca. Like his model, Cabera is on the run from the empire that destroyed his home city and is constantly at risk of being turned in for a bounty. As this story begins, he has been taken prisoner by the king of Narata. In addition to the duplicitous king, there are duplicitous soldiers, a beautiful priestess, a winged monster, and the serpent of the title:

Beyond her a thing of nightmares loomed, suspended on a gleaming, glistening silver neck, wide around as two barrels.

The serpent’s skull was fully the size of a long boat, and her flaring nostrils wider than dinner plates. White hair hung from either side of her snout in a parody of a mustache, and further back, two immense slitted eyes glowed like emerald suns. The head rose steadily until it hung ten feet above.

“Name yourself, intruders!” The serpent’s voice thundered off the cave walls like the ringing of great gongs, and as she spoke teeth the length of sabers flashed wetly in her mouth.

Jones is one of the best at writing modern but real sword & sorcery. Buy the magazine he edits, read his stories, and you’ll see what I mean.

I was really interested in Cirsova. I bought the first issue and was already too promote it through Barsoomia. Then he got all political and mean on twitter and I coudln’t do it. I don’t know what he was thinking. It’s really too bad, it’s my kind of thing except for the politicking…

@Barsoomia – I understand your attitude. My approach to reading/reviewing and people’s politics is I separate them. I have to, if I didn’t, there is almost nothing I could read/watch/listen to. There are artists on the left, the right, and the center, and I disagree with all of them on lots of things.

I agree with Fletcher about politics and creative output (if the politics are infused with the creative output, then that is a different matter). I also think it’s generally a bad idea to only like, read, pay attention to, and so forth those who share our political views.

I totally agree with reading a range of views ( I was just doing that as I had lunch ) I first encountered Cirsova on twitter when he first launched. I was there as entertainment, most likely talking about Woola at the time. Cirsova treats twitter diffferanty than I do. He talks politics and I don’t. Politics isn’t what I’d want from him or anything else that I’d go to for entertainment. I do find it odd that he attaches his politics to his brand…. That said, I would very likely introduce myself if we were both at a convention together and see if he wanted to go for a beer.

@Barsoomia I agree with you about the generally bad idea of attaching politics and brand–I think it would be better to keep those things separate, so I see where you’re coming from (like I said I think there is a difference between separate political views and creative output vs. one’s political views being infused with your creative output). I haven’t read Cirsova yet, but I’m assuming that the political views of the editor are not infused in the stories and opinions, at least not directly.

@NOLAbert – I do think it’s a bad idea to limit oneself to like thinkers, but it’s more I don’t care. Of course there are folks who exist beyond the bounds of acceptable behavior and thought, but for the most part I try to stick to the quality of the art under review.

@Barsoomia – And, of course, most people do that. We read what we find cool, etc. Most people, I believe, really don’t care about the politics of artists – unless they’re jammed in their faces.

Cirsova definitely has an artistic/political stance on twitter, but he’s no or more less vocal, and in a similar style, than many people on both sides.

[…] Fletcher Vredenburgh gives this issue a tough, but fair, review as probably his least favorite of ou… Fletch was one of our earliest supporters outside of our immediate circles and given us great reviews in the past, so his criticisms of our new directions are ones we’ll seriously consider. But he’s also more a Sword & Sorcery guy, so his bias against Raygun Romance and Sword & Planet will be weighted accordingly. […]