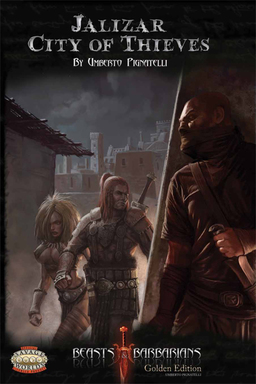 About a month ago, I wrote an enthusiastic review of Haven — The Free City, a complete fantasy city designed and published by now-defunct Gamelords way back in 1984. One of the things I mentioned is that detailed, usable, interesting city settings are relatively rare.

I thought I’d test that theory by hunting around for a more modern urban setting and taking it for a spin. Sure enough, they were a little sparse — a lot harder to find than another megadungeon, for sure. But there were a few. And the first to catch my eye was Jalizar, City of Thieves, a Savage Worlds setting very different from the player sanctuary of Haven. Jalizar promises danger and intrigue in spades, inviting players to don the cloak of thieves waging a righteous battle for profit and glory against a corrupt establishment.

Jalizar, City of Thieves, the Rotten Flower of the North, is revealed to your eyes in this book!

In its pages, you’ll learn the seedy ways of the Thieves’ Guild. You’ll smuggle goods into the city, fooling the Copper Helms, the corrupt city watch of Jalizar, vie for power with the Merchant Houses or, if you are really bold, venture into the dark Sewers of Jalizar where an age-old evil lurks undisturbed.

Twenty new Edges, new trappings and tweaks for the arcane backgrounds, an additional list of gear, and much more await you in this book! So sharpen your dagger, put on your black cloak, and step outside into the dark alleys of the City of Thieves!!

That’s a lot of exclamation points. Also, I’m not familiar with Savage Worlds and I don’t know what the heck “Twenty new Edges” means. Still, I like what I see. My copy arrived this week, and first impressions are excellent. The book is beautifully designed and the interior artwork is plentiful and top-notch. We’ll see if it holds up to a closer reading.

Jalizar, City of Thieves was written by Umberto Pignatelli and published by Gramel on October 1, 2013. It is a Sword and Sorcery Savage Worlds sourcebook for Beasts & Barbarians, whatever that means (but it sounds good). It is 199 pages, priced at $24.99 in paperback. It’s also available as a watermarked PDF at RPGNow for $10.54 (or $7.36, if you buy before March 16).

Thanks for commenting. And yes, that’s very helpful.

I just had a look at Beasts & Barbarians, and I thought it looked very intriguing. Maybe I should have started with that!

In any event, congratulations on Jalizar. I’ve only had a few moments to dig into it this week, but it looks like a very fun setting that would be remarkably useful for anyone who wants to run a thief-based campaign. Well done.