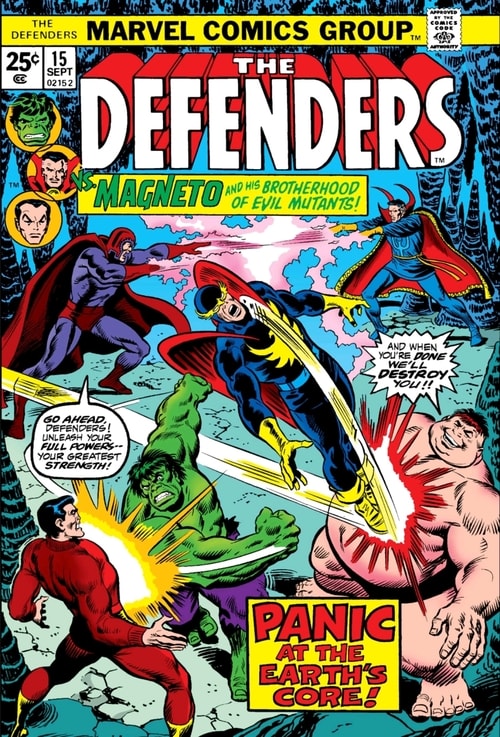 That’s the plan here, too, as it was in the Thomas-Adams X-Men run in the Savage Land, but this Defenders appearance is worth bringing up for a few reasons. Firstly, Klaus Jansen’s inking in issue #15 is superb (image below). He classes up every penciller he touches, as we saw him later do with Miller’s Daredevil. Unfortunately, Mike Esposito inks Sal Buscema in issue #16. Buscema sometimes feels… unmoderated and Esposito doesn’t moderate some of the Buscema flourishes I enjoy less. 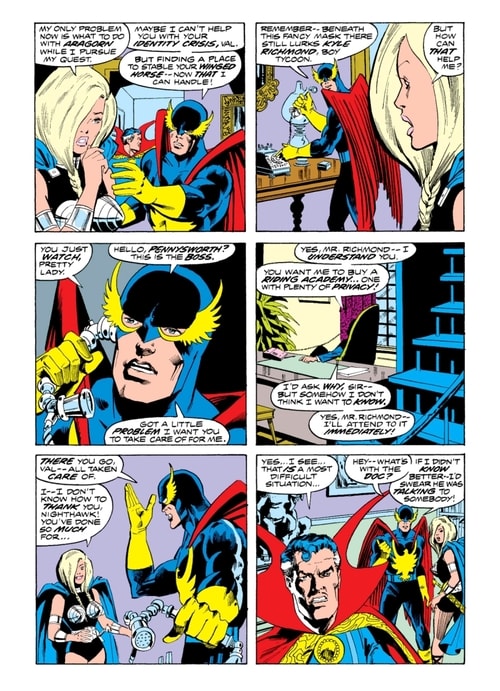 Secondly, Professor X makes a substantive guest appearance, as do  Blob, Mastermind and Unus of the Brotherhood of Evil Mutants. They’re always a hoot. Lorelei is there too and Magneto admits to kind of digging her company which made me wonder if there’s more to their relationship than is shown. Maybe I’m reading too much subtext into normal pre-fight villainous bragging. 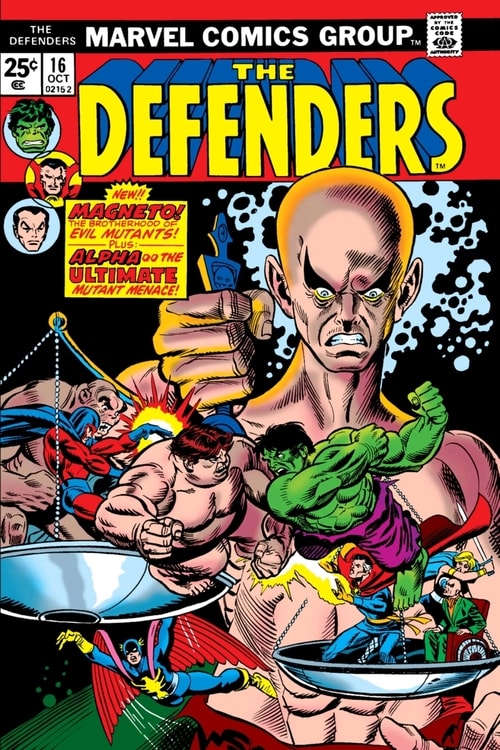 Gil Kane seemed to be doing every second Marvel cover in this part of the Bronze Age (above) and Mike Esposito inks over Sal Buscema pencils (below). 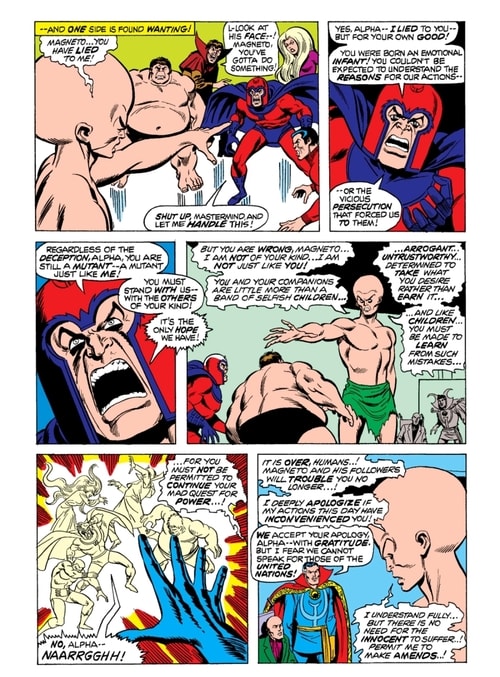 Most importantly though, by the end of issue #16, the mutant Magneto created and called Alpha has evolved so far that he develops a set of ethics and as punishment for the evil things Magneto made him do, de-ages the powerful X-villain to the toddler stage (below). During the Phoenix saga, Magneto is returned to adulthood, but younger than before, and more powerful. This is a relevant plot point for the Uncanny X-Men series that Claremont, Byrne and Cockrum will use to bring Magneto to his full greatness as a foil to Professor X and a deadly enemy to the X-Men. 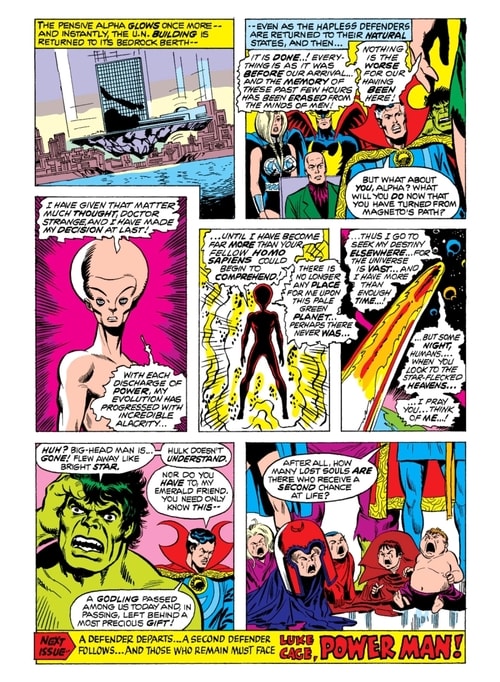 On some visits to Toronto as a young teen, I looked up these back issues in comic book shops and added them to my collection. If you want more of a look at The Defenders, I covered the first half of their series in a 2019 post. 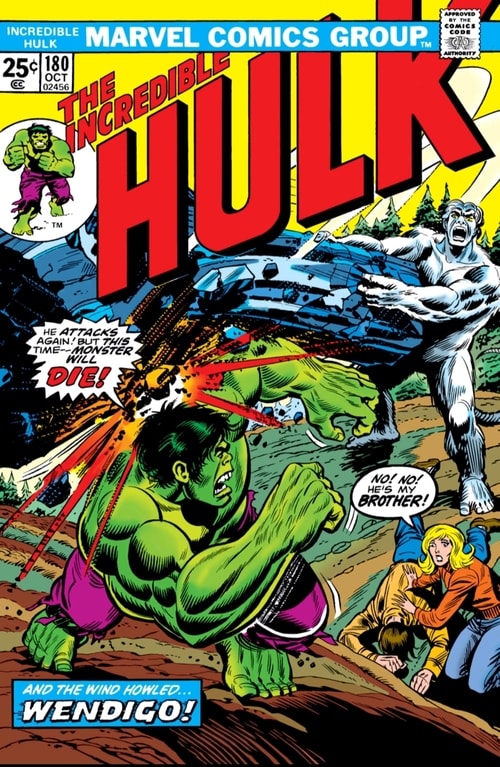 Most consequential and momentous for The Uncanny X-Men era are Incredible Hulk #180-182. The publisher copy reads:

While in Canada, Hulk is lured into an occult ritual conducted by Marie Cartier. Will Marie use Hulk’s body as the host for an evil spirit?

Indeed, Hulk is drawn to Québec because a woman with magical powers wants to remove the Wendigo curse from her brother, who got it by eating human flesh. Hulk does arrive there, but since his last visit (just a year earlier in Incredible Hulk #161), the Canadian Government has gotten ready, with Weapon X. Here’s the first panel with Wolverine: 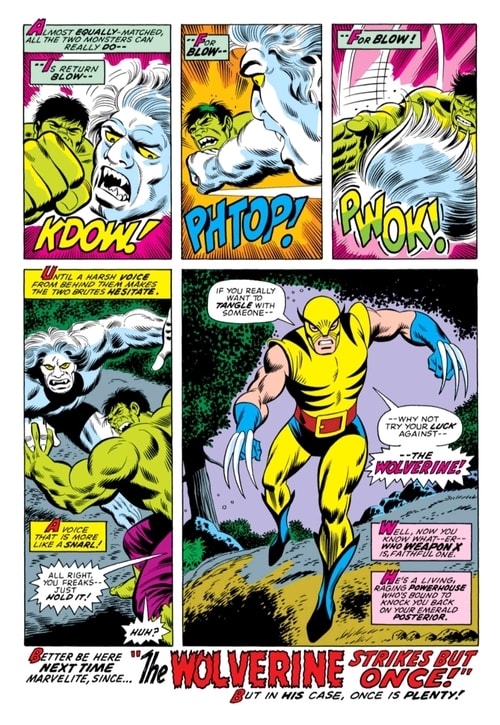 When I was a tween and teen comic collector in the early 80s, I obviously couldn’t afford a genuine first-appearance of Wolverine Hulk back issue, but I got to read this story in a black and white French reprint I found on a school trip to Québec city. I have to say the colored English version is better. 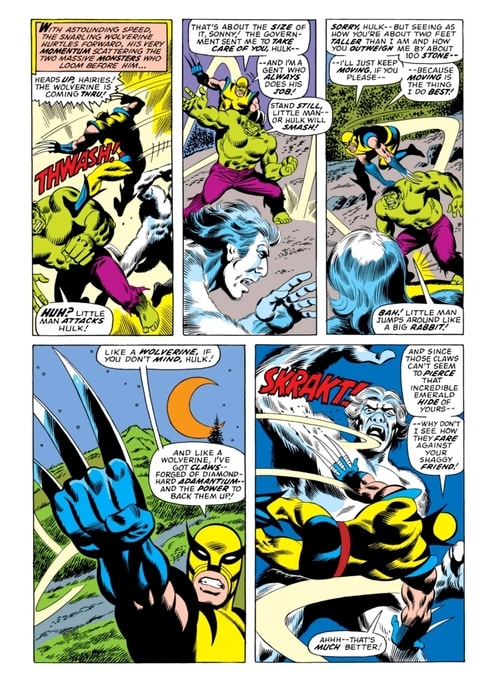 It’s surprising how many elements of the Wolverine who know were there in the Wein-Trimpe co-creation. He’s five foot five inches tall, has adamantium claws, is really fast, with a ton of stamina and can take remarkable amounts of damage. Personality-wise he’s angry, fearless, as violent as they could make him under the 1970s comic code, and he’s got something to prove. 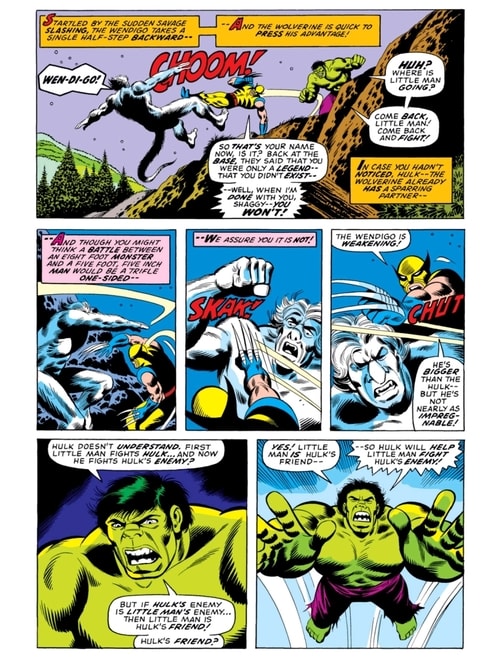 The only thing that I notice isn’t there is the cadences of speech that Len Wein established in Giant-Size X-Men #1 and that Claremont refined over his seventeen year run as writer. 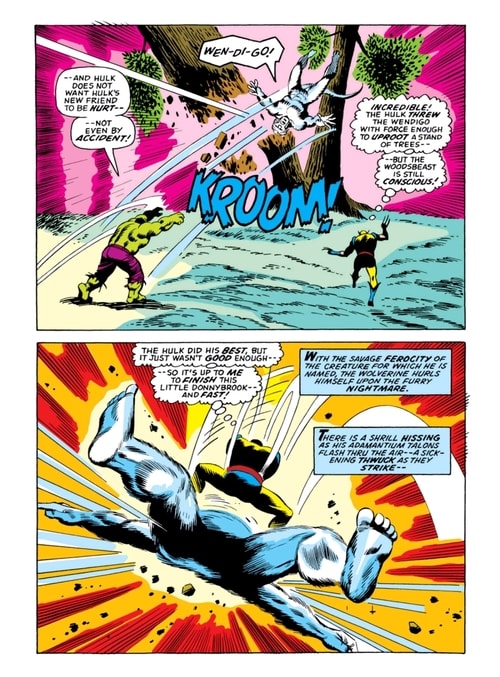 The last substantive piece of X-Men history in this post is Marvel Team-Up #38, where Beast and Spider-Man fight the Griffin, much like Angel and Beast did in Amazing Adventures #15. The Griffin is more powerful and Beast isn’t an outlaw anymore – he’s a recognizable, card-carrying Avenger and it’s fun to see him in the personality and look he’ll have for the next 10-15 years (until X-Factor I believe). 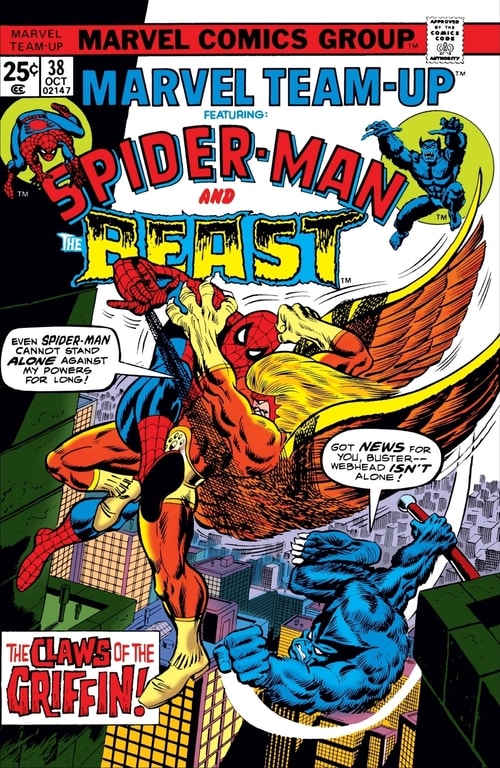 The issue doesn’t do anything special with either character – Bill Mantlo delivers a wise-cracking, issue-long fight that ends with the Griffin face first on the pavement, but if you enjoy X-Men nostalgia it’s a nice glimpse into one of the founding members. 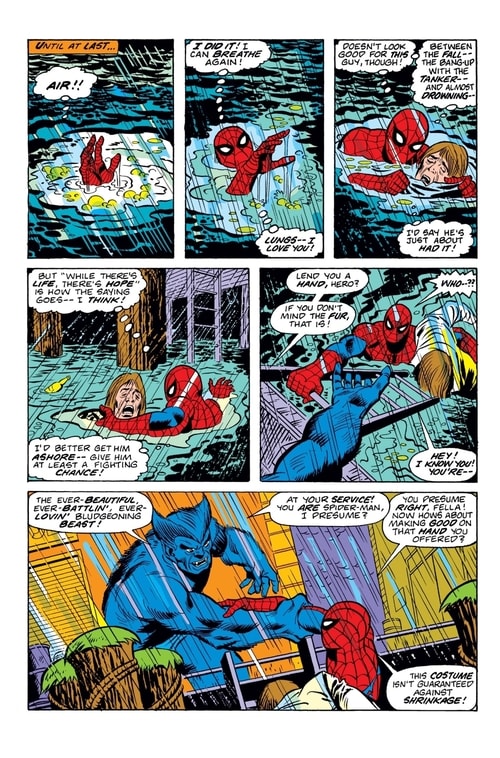 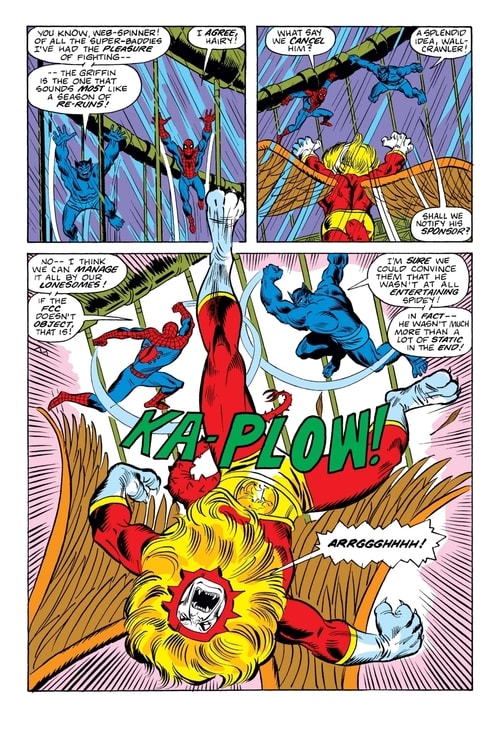 And other than Giant-Sized Fantastic Four #4, which guest-stars Professor X and introduces Madrox the Multiple Man, and X-Men – First Class Finals, a 4-issue limited series from 2009, neither of which I’m going to cover here, we’ve kind of reached the end of the old X-Men.

We’ve now seen basically every appearance of the X-Men from issue #1 in the Silver Age in 1963 all the way to early 1975, including some series that were inserted into the chronology long after the fact. The X-Men had some great, even landmark, stories and character moments, as well as some middling and forgettable adventures.

They introduced some of the most charismatic and iconic villains like Magneto, the Sentinels, Sauron, and the Juggernaut. They introduced villains who went on to become heroes, like Scarlet Witch, Quicksilver, and Banshee. And they set up some of the central conflicts of the Marvel Universe that would pay off enormously in the 1980s, 1990s and the 21st century.

They suffered from relatively uninspired sales though, and in the Silver Age, they never had the bursts of creativity of the Kirby-Lee Fantastic Four or the Ditko-Lee Dr. Strange, nor the line-up of powerhouse characters like the Avengers, nor the engaging narrative voice of The Amazing Spider-Man. Arguably, the potential of the title didn’t come into focus until the end of the Silver Age with the Thomas-Adams run.

The years of unrealized potential is now done, starting with my next blog post in two weeks, when Len Wein, Chris Claremont and Dave Cockrum express a new, sophisticated, modern vision of the X-Men, one that will put them into cartoons, the silver screen and lunch box and t-shirt superstardom.