Only a few years ago, the ‘lost’ pilot of a 1959 Nero Wolfe television show came out on DVD. Surprisingly, no one posted it on YouTube until March of 2020, while much of America was staying at home during the Corona virus Pandemic. I myself saw it for the first time on March 22, so here we go!

Back in 1959, Edward Fadiman, part of Fadmian Productions, (which also acted for Rex Stout as ‘Nero Wolfe Attractions’), got a pilot episode made through CBS. Unfortunately, it was fated to be a one-episode series (or was it?). TV was still an emerging medium, competing with radio, the silver screen, and the stage. It’s no surprise that the project turned to Broadway for the dual leads. And in this episode, Archie’s star shines at least as brightly as Wolfe’s.

Kurt Kasznar appeared in one episode of a lot of TV shows, which was common in the fifties and sixties. He was a successful stage actor, including roles in The Sound of Music, and Barefoot in the Park. When notices about the pilot project began appearing in early 1959, he was appearing in Look After Lulu. At 280 pounds, he had the build for Wolfe. The press reported that he actually had lost 70 pounds and needed padding for the part! William Shatner was appearing on Broadway in The World of Suzi Wong. He was years away from boldly going where no man had gone before.

Alexander Scourby, who appeared in noir classic The Big Heat, was the ‘name’ guest star for the pilot episode.  George Voskovec played one of the suspects, Dr. Wollgang, He would revisit the world of Nero Wolfe again, starring as Fritz Brenner in William Conrad’s 1981 series.

As the show opens, we see a scientist dying of an apparent heart attack at the exact moment of a moon missile launch at Cape Canaveral. We move to Nero Wolfe, sick in bed with a cold, as Archie brings in a breakfast tray, featuring one of Fritz’s omelets (with a hint of sage). Wolfe absolutely shovels it down. He converses with Archie while he eats like a starving wolf (no pun intended). I found it completely distracting as he pushes food into his mouth while still chewing the prior bite. Fortunately, there is no more eating the episode. Archie does drink a glass of milk, while Wolfe breakfasts, which was a nice touch. Even if he drinks it while Wolfe is eating in bed. 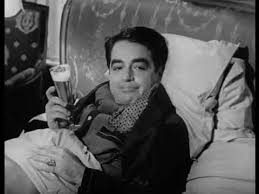 Throughout the episode, Wolfe sneezes. And with his mouth; germs would be flying out. Not once does he cover his mouth and nose first. He sneezes messily, and THEN he gets out his handkerchief. I’m surprised Archie will stay in the same room with him.

Kasznar has an accent, which Wolfe probably would have had for at least some years after immigrating to America. But foreign versions aside, I don’t ever recall an accented Wolfe. It’s only there sometimes (like Timothy Hutton’s come-and-go NY accent in the A&E series), and it’s not overly present. I’ve watched this show a half-dozen times, and I guess the accent is okay. Wolfe with an accent is different, but it’s not a problem.

Physically, he is big enough for the part, though he’s no Sidney Greenstreet or Orson Welles. He has three major scenes, and he’s in a different outfit for each. He’s in bed wearing a robe, over his pajamas. In the second scene, he’s in the office, holding an orchid in a large pot next to the record player. He’s playing Domenic Scarlotti to improve the orchid’s coloring. Now, he’s wearing what looks like a smoking jacket, or formal dressing gown, over a presumably yellow shirt. That’s Wolfe, in the office, in  smoking jacket. Finally, in what Inspector Cramer would call ‘one of his charades’ at the end, he’s properly attired in a suit and tie.

I like my Archie Goodwin smart, breezy, and capable, with a sense of humor, but not built for comic relief: No Nigel Bruces here. Lee Horsley and Timothy Hutton both work well for me. And so does William Shatner. Now hold… your… horses. It’s not… what you… might think. While we love to poke fun at William Shatner for his pause-filled dialogue on Star Trek, he doesn’t do his famous ‘Kirk Slow Talk’ in most of his roles. Watch TJ Hooker – and have you seen Heather Locklear’s poured-on uniform? – or his turn as the villain Stapleton in a BBC production of The Hound of the Baskervilles, starring Doctor Who Tom Baker. Shatner plays Archie pretty much as Stout wrote him. His back-and-forth with Wolfe feels right. He goads Wolfe into working because the finances are low. And his narration, in the brownstone and out in the field, is on target.

During the ‘reveal,’ Archie is sitting in a chair, in front of Wolfe’s desk, facing the crowd. That’s just jarring. Archie at his desk is a huge part of the character – one reinforced by the A&E series, true. But I don’t think too many readers of the Corpus would be crazy about that aspect of the show. 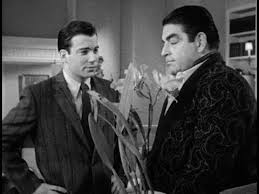 The episode goes fast! After the ‘sick-in-bed’ scene, Archie gets to solo, visiting one of the suspects. He comes back to find Wolfe in the office playing music for an orchid. And in the next scene, Wolfe identifies the murderer. The show ends with another scene of Wolfe in bed, where Archie confronts Wolfe about how he solved the case. Wolfe, leaving his beer unfinished, buries his head under the covers to avoid talking with Archie. It’s not Corpus, but it’s amusing. And Archie quotes to Wolfe verbatim, which is a nice touch.

None of the other characters appear. There’s no Fritz, or Theodore, or Saul, or Cramer, or Lily – none of the gang. Of course, we might have seen at least some of them in future episodes, but it’s just Wolfe and Archie in this one.

It’s not a bad episode, if not very memorable. I think that Shatner is by far the best part. Kasznar isn’t bad and worth watching in another episode. As far as faithful to Stout goes, I’d put it out there with the Greenstreet radio show and the comic strip. It is recognizable as Wolfe and Archie, but a lot of liberties are taken.

I’ve seen one reference on the web that three additional episodes were filmed, but that’s as far as that goes. Personally, I think this is worth watching a few times. I love the Maury Chaykin series, and I like the William Conrad, and the recent Italian series. For a Nero Wolfe fan, there’s no reason not to queue this one up on YouTube and give it a try.

Thanks to Lee Goldberg, who co-wrote several of the A&E episodes, for posting the video.

This was fun! My first intro to Nero Wolfe, and quite enjoyable. The mystery was fine, but it was the interplay between Nero and Archie that made it entertaining.

And it was a real pleasure to see Shatner in the role. You’re absolutely right, he doesn’t affect the Kirk drawl. I always wondered if that was a quirk of Shatner’s, or something unique he created for Kirk, and this is evidence of the latter.

This was a great entertainment for a Monday morning. Thanks for sharing it!

Yeah, it was a Kirk thing.

You should Youtube A Nero Wolfe Mystery. THat’s the series with Maury Chaykin and Timothy Hutton. It was quite faithful to the original stories, and it was EXCELLENT. On a par with Suchet’s Poirot and Brett’s Holmes.

There’s not really a bad episode. I like Murder is Corny quite a bit. And Death of a Doxy for the longer ones.

They’re all on Youtube – settle in and watch one or two.

I never knew about this pilot!

Many thanks for the tip.

John – There was a blurry picture of Shatner and Kasznar sitting, around for years. But that was it. And there were only a few newspaper mentions of it from back in the day. Then, it came out on DVD with some other lost pilots a couple years ago. It was definitely real! I think it’s fun enough, being so short.

This is in DVD 2 in the series

DVD 1 has a Cool and Lam pilot, with an intro by Erle Stanley Gardner himself.