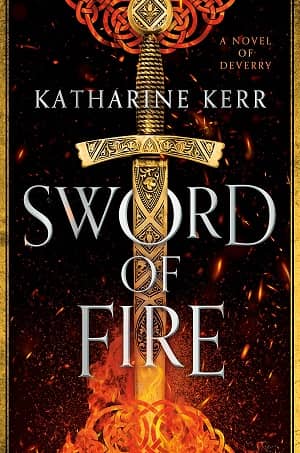 Katharine Kerr’s science fiction novels include Polar City Blues, Palace (with Mark Kreighbaum), and Snare. But she’s much more well known for sixteen epic fantasy novels set in the world of Deverry, starting with Daggerspell (1986), Darkspell (1987), and The Bristling Wood (1989).

Kerr’s roots are firmly in fantasy gaming, which immediately increases her cred in my book. She was introduced to fantasy gaming in in 1979, and she quickly began writing articles for gaming magazines. She was a contributing editor to Dragon magazine, and authored adventure modules for TSR and Chaosium’s Pendragon role-playing game. Her first novel was published in 1986, and she’s never looked back. It’s fiction that brings the fame and the fast cars, so I guess I can’t blame her.

The last few years she’s been occupied with her Nola O’Grady urban fantasy series for DAW (which the author describes as a “female James Bond with magic rather than violence”). It’s been over a decade since we’ve seen a new novel in Deverry, though, and it’s good to see her return. Ralph Harris gave Sword of Fire a warm review at BookPage; here’s a sample.

Sword of Fire centers around a sociopolitical struggle against the unjust courts of the Kingdom of Deverry. While that certainly could be a backdrop for a bleak, dark struggle, Kerr’s novel is instead a lovely quest with an ever-optimistic, wholeheartedly enthusiastic crew of brilliant women and chivalrous men. Alyssa, our primary heroine, embarks on a trip to recover a book that can help usurp the old traditions of the courts with even older, supposedly more fair traditions….

With a lightly magical, extremely familiar setting and lovable cast of characters, Kerr sets out to take the reader through the Kingdom of Deverry’s evolution to a (hopefully) more just world. She doles out plot points via chatty gossip between noble families and secret messages sent by way of servants… Meandering through the pages of Kerr’s Sword of Fire was escapism of the finest quality. For readers looking for a dark drama of epic proportions, these 380 pages will hold nothing for you. Here, you will only find charming banter, happy endings and optimism in prose form.

Sword of Fire is the opening volume in The Justice War. It was published by DAW on February 18, 2020. It is 384 pages, priced at $27 in hardcover and $13.99 in digital formats. The cover was designed by Katie Anderson. Read an excerpt from Chapter One here.