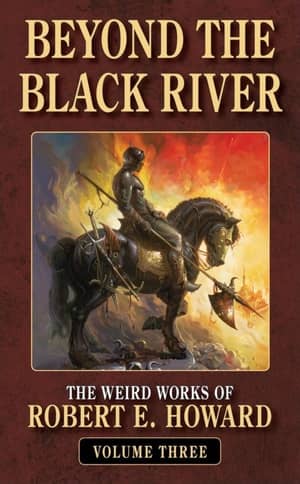 Keith West dropped me a note this week to alert me to the publication of an intriguing 3-part article on his blog Adventures Fantastic.

“Beyond the Black River”: Is it Really “Beyond the Brazos River”? was written by Robert E. Howard scholar John Bullard, who’s been editing Howard’s correspondence for the next edition of his collected letters. The article examines Howard’s influences when writing the classic Conan tale “Beyond the Black River,” and particularly how he drew from a famous incident in Texas history to create the ending.

I’m not a Howard scholar myself, and generally leave these debates on Howard’s sources to the experts, but Bullard’s piece weaves together fascinating tidbits from letters to H.P. Lovecraft, Carl Jacobi, and others, plus an interview with Novalyne Price Ellis, to make a compelling case for his theory. Just as interesting to me was the intimate glimpse into Howard’s creative process, and his close friendships with his fellow pulp writers. Here’s a sample:

Robert E. Howard’s Conan story, “Beyond the Black River” is considered to be one of his best stories by his fans. It tells of an attack by Howard’s favorite historical peoples, the Picts, against the encroaching colonization of the Aquilonians on the Picts’ deeply forested land between the Thunder River to the East, and the Black River to the west in his fictional Hyborian world setting…

Howard’s recounting of Texas history and characters enthralled his pen pals, and in several of the surviving letters, they encouraged him to write about this history in his fiction…. Yet, prior to the second half of 1934, Howard was unsure of how to incorporate his knowledge of the settling of the Texas frontier into his stories….

Yet sometime after writing the letter to Jacobi, Howard seems to have had a breakthrough in how to incorporate his knowledge of Texas history into his stories and began writing what is generally considered to be one of his finest stories sometime during the Summer or possibly early Fall of 1934… In a December 1934 letter to Lovecraft, Howard wrote:

“My latest sales to Weird Tales have been a two-part Conan serial: “Beyond the Black River” — a frontier story; …in the Conan story I’ve attempted a new style and setting entirely — abandoned the exotic settings of lost cities, decaying civilizations, golden domes, marble palaces, silk-clad dancing girls, etc., and thrown my story against a background of forests and rivers, log cabins, frontier outposts, buckskin-clad settlers, and painted tribesmen. Some day I’m going to try my hand at a longer yarn of the same style, a serial of four or five parts.”(Lovecraft, Dec. 1934)

We’ve discussed “Beyond the Black River,” and its importance to the modern fantasy canon, previously at Black Gate. Recent coverage includes:

I remember seeing a historical marker in Harper Texas in the Texas Hill Country.

It marks the area where some local settlers were massacred in the 1860’s (I doubt if Kiowas would have characterized it so) and some were taken captive.

Harper is not too far from Cross Plains. I imagine a young Robert E. Howard had heard similar stories from people who were contemporaneous with frontier Texas life.