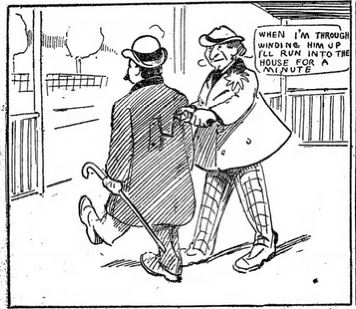 Paleontologists constantly push the date of the first known human or the first known use of symbols earlier. Word detectives compete with one another to spot ever earlier uses of a word or phrase or bit of slang. And historians take their reputation in their hands whenever they state that such-and-such was the first one in history.

In my book, Robots in American Popular Culture, I cited Hans Horina’s short- lived robot series, Professor Dodger and His Automatic Servant Girl, which appeared in the Chicago Tribune Sunday comics section in late 1907, as the first comic strip to feature a robot. I didn’t dig that up myself. I found it on Stripper’s Guide, the wonderful blog on old newspaper comics run by Allan Holtz.

As inevitable as Homo Nadali, another comics historian, Alex Jay, found an even earlier robot strip and posted about it on Stripper’s Guide. But there’s a catch. Is it a robot strip or isn’t it?

Donald Farquharson Stewart was probably born in 1880, though various references give dates a year or two later. He was born in Canada and settled as an immigrant in the United States, eventually becoming a citizen, a status that was to heavily influence his later career.

By 1900, though, he was already a working cartoonist for the American Boy magazine. In 1903 he moved over to the Detroit Free Press where he gained a reputation as a political cartoonist. Prohibition Cartoons, a 1904 book with cartoons by Stewart and text by Henry W. Wilbur, was pure propaganda for the cause of Prohibition and a Prohibition Party to be elected to enforce those laws. From Detroit he moved to Brooklyn, where he worked for the Brooklyn Daily Standard Union, and gave a chalk talk on The Making of a Cartoon” before the Oliver W. Stewart League. 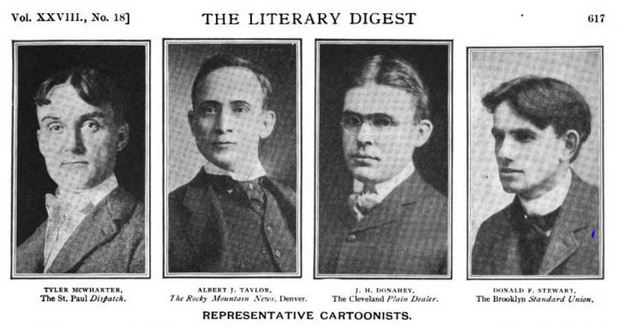 Rising young men who could orate were stars in an era when talks were a popular and respectable way to spend an evening. In Detroit he had taken part in a YMCA debate: Resolved, That a man should marry before the age of 35. Stewart took the negative but didn’t mean it. He married fellow Canadian Marietta McIntyre in June of 1903. From Brooklyn he transferred to the New York Globe from 1906 to 1907 then returned to Detroit for a job at the Detroit News from 1907 to 1909. The Stewarts and their growing family managed a full decade there before moving back to New York in 1920. The war had fired up patriotic fever and he went back to propaganda cartooning for a long series of books with titles like We and Our Government, We and Our Work, and We and Our History. He died in 1945, almost certainly unaware that one day his name would be resurrected in robot history. Professor Dodger only lasted three Sunday strips and Stewart’s strip collapsed after four. No evidence of his doing another comic strip has surfaced, but given the way he hopped around the country and from newspaper to newspaper somebody may yet trip over a second.

The big date in robot history to circle is February 22, 1903, when The Adventures of Inventor Wheelz and his Wonderful Dummy debuted. The humor is primitive, even by propaganda standards. Inventor Wheels, boyishly dapper, has created a “dummy” that can walk, if nothing else. It can’t talk either, a pun contemporary audiences would get faster than today’s since period slang used “dummy” for a mute person, the source of the secondary meaning of a “figure representing a person,” i.e., an object that looked like a person but couldn’t talk like one. 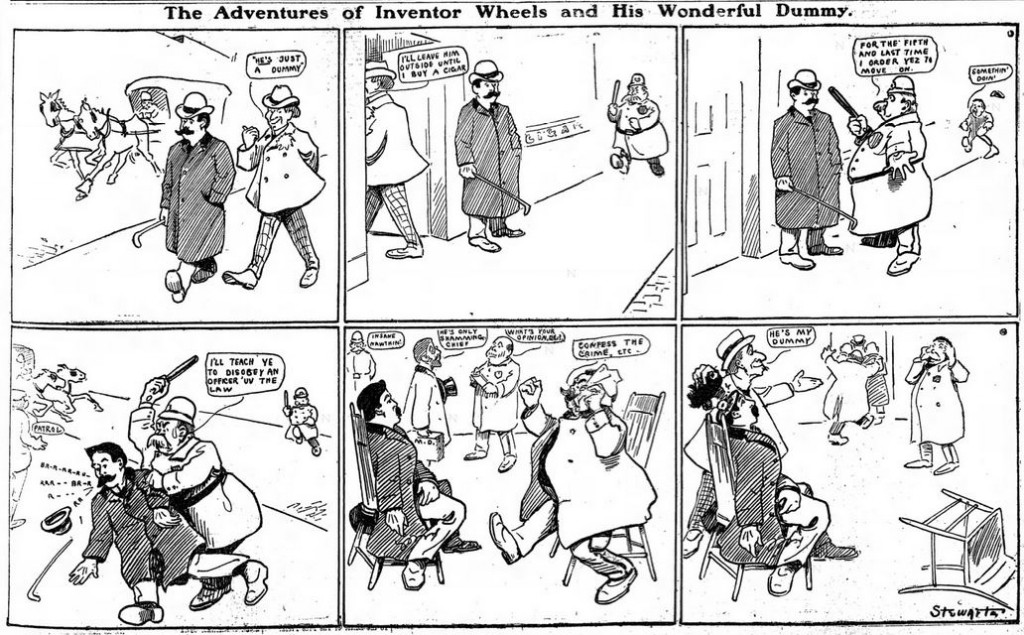 A passing patrolman scolds the dummy for loitering, raps it over the head, and drags it to the police station to get it to confess to its no doubt nefarious criminal history, before Inventor Wheels lifts off the top of its head, revealing the machinery.

Not much improvement is shown in the March 1 strip, except that the Inventor’s name is now spelled “Wheelz.” The Free Press seems not to have announced its new strip or made any reference to it at all so it’s unclear whether the spelling was somehow typoed in the first appearance or changed for humorous purposes in the second. 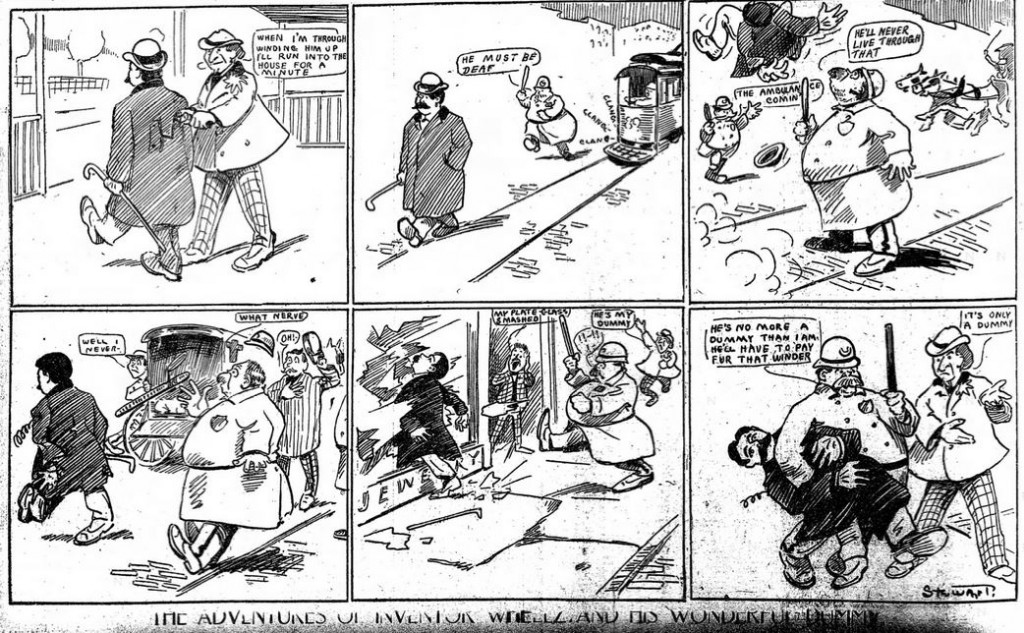 The big reveal is that the dummy is wound up using a large crank attached to its back. Clockwork figurines had a long history before robots. For mostly arbitrary reasons – I wanted to give modern robots a firm starting point – I didn’t include clockwork figures in my book, except for a couple that may have snuck in. But the robot that is my starting point, a steam man invented by Zadok Dederick in 1868, also couldn’t do anything but walk (assuming it could do even that much). At least it purported to have some usefulness, that of hauling carriages, and so do the other 19th century inventions I included. Robots work; the dummy just is. Left to my own devices I’d disqualify it from the ranks of robotdom. Yet the dividing line is so fuzzy that I can’t ignore it either. 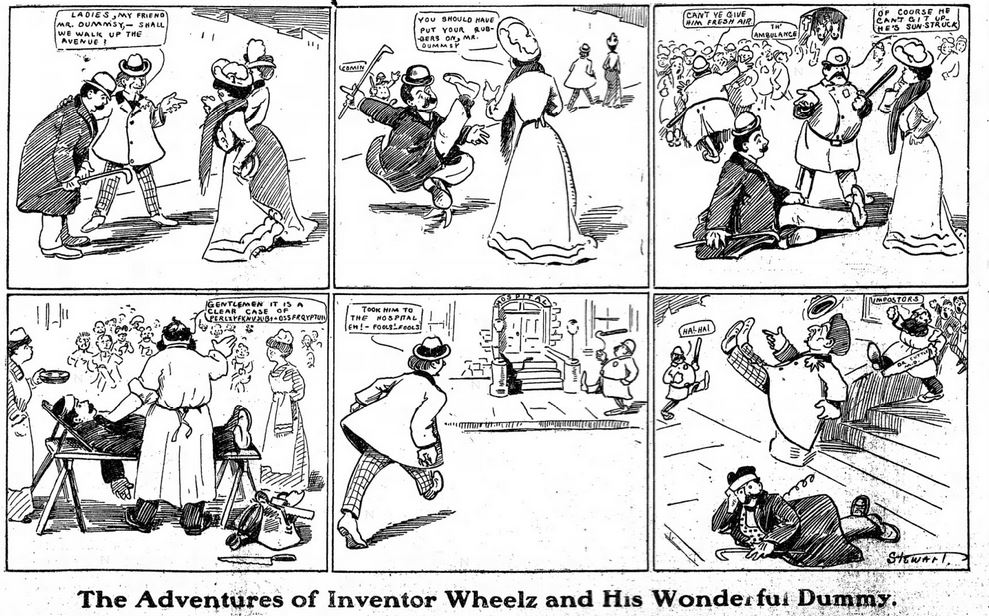 Especially since the indisputable king of early robot cartoons, H. C. Greening’s Percy, is anticipated by Stewart in his middle two strips. (In the third the dummy is introduced as “Mr. Dummsy,” thereby making it also the first comic strip robot to have a name. Both show the dummy being wound up and setting forth on his own, innocently wreaking havoc until he runs down. That’s the one joke Greening gave Percy each week for two years, although he told it better than Stewart, having a true animator’s eye for the small details. 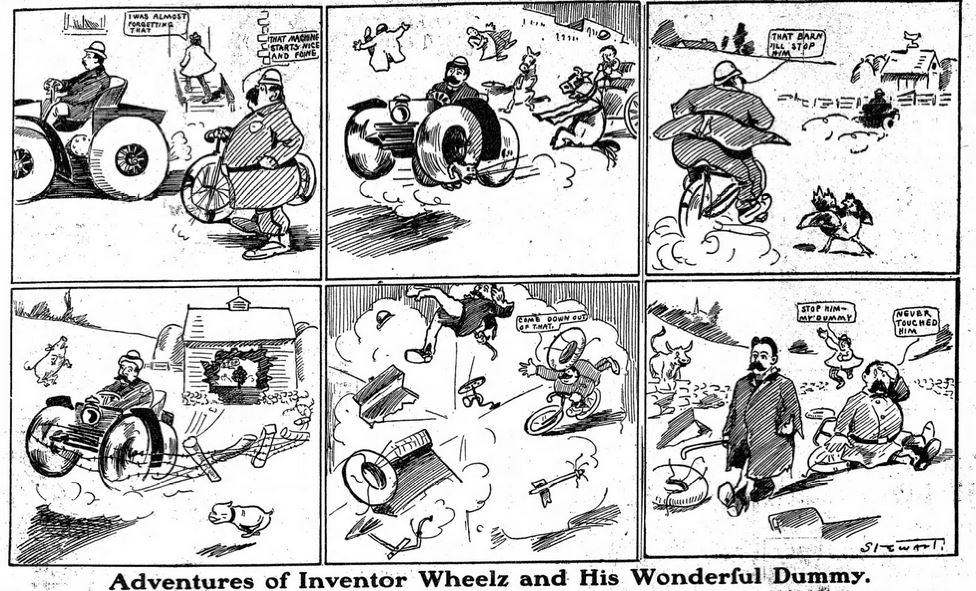 Why Stewart stopped Inventor Wheelz so quickly is a mystery as deep as Professor Dodger’s demise. Certainly these strips weren’t noticeably more awful than most. The Free Press didn’t replace Inventor Wheelz with a new strip; it merely stopped carrying a comic outside the one on their humor page, which was far worse than Inventor Wheelz. Most likely Stewart wasn’t happy with his work and abandoned it, little knowing how famous it could have made him. Well, in certain, very small, circles.

Steve Carper writes for The Digest Enthusiast; his story “Pity the Poor Dybbuk” appeared in Black Gate 2. His website is flyingcarsandfoodpills.com. His last article for us was Robots! In! Space! His epic history of robots, Robots in American Popular Culture, is finally available wherever books can be ordered over the internet. Visit his companion site RobotsinAmericanPopularCulture.com for much more on robots.