Science fiction writers from Doc Smith to Robert Heinlein had their lone inventors hop into spaceships they built in their back yards. NASA had no such luxury. Space was the absolute unknown in the 1950s. A few rockets and satellites had poked their noses into the vacuum, but piloted craft were on the horizon and next to nothing was understood about how the rigors of space would affect human bodies. NASA had to worry about a million small details, using thousands of engineers at dozens of companies.

The pressure to learn grew more urgent in the early 1960s as the Americans prepped for a moon voyage. Project Gemini followed the just-get-‘em-in-space Mercury with the specific goal to understand space and “To demonstrate endurance of humans and equipment in spaceflight for extended periods, at least eight days required for a Moon landing, to a maximum of two weeks.” That put them into a quandary. The conditions of space couldn’t truly be duplicated here on Earth and starting tests on astronauts after they got to space defeated the whole notion of preparation.

Some bright – and at this distance unknown – engineer at NASA had the lightbulb idea: robot astronauts.

Newspapers revealed the project in late 1963 in rather matter-of-fact terms.

Instead of flesh and bone they’ll have mechanical joints, actuators for muscles and nervous systems made up of servo valves. …

The dummies … will have sensors at each of 36 joints from fingertips to feet and precise data can be obtained to determined [sic] how much stress is required to bend a suit in various ways and the suit’s resistance to motion.

The $87,500 dummies were built under contract to the Illinois Institute of Technology Research Institute in Chicago. They needed to be extremely adjustable, able to simulate the bodies of men in the 5th to 95th percentiles of height, or 5/5” to 6’2”. IIT called the figure a Power Driven Articulated Dummy (PDAD) in its final report, submitted in 1965, from which the following quotes are taken. 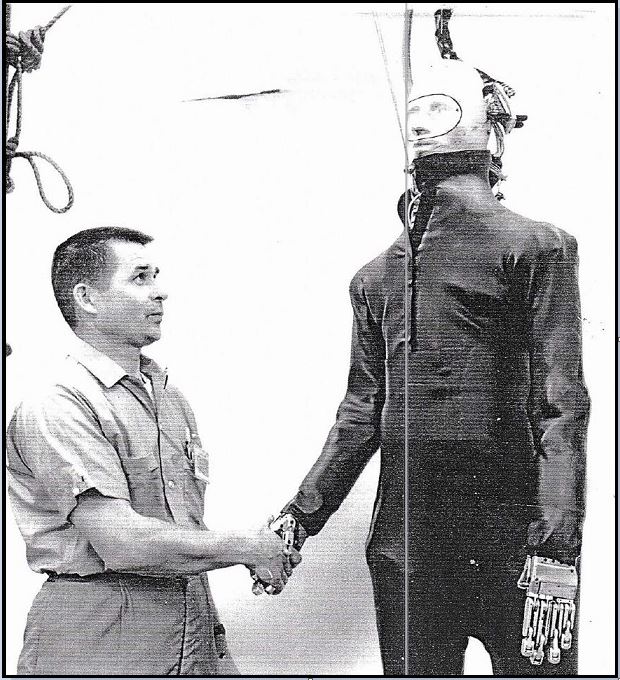 Basically, the dummy is a remotely controlled, articulating force gage, configured and sized like a human.

This brief description, constitutes the design objectives of the program. The objectives were attained by integrating components representing four major subsystems, namely: 1) power for articulation, 2) control, 3) torque sensing and 4) structure. The inter-relationship of these systems in a single joint in shown in the schematic-block diagram of Figure 5.

A rotary hydraulic actuator provides the powered motion. The actuator output is transmitted to an adjoining member through a cantilever beam, to which certain gages are bonded.

The PDAD dummies reached Houston’s Manned Spacecraft Center in May 1965. They almost immediately got their pictures in Popular Science. 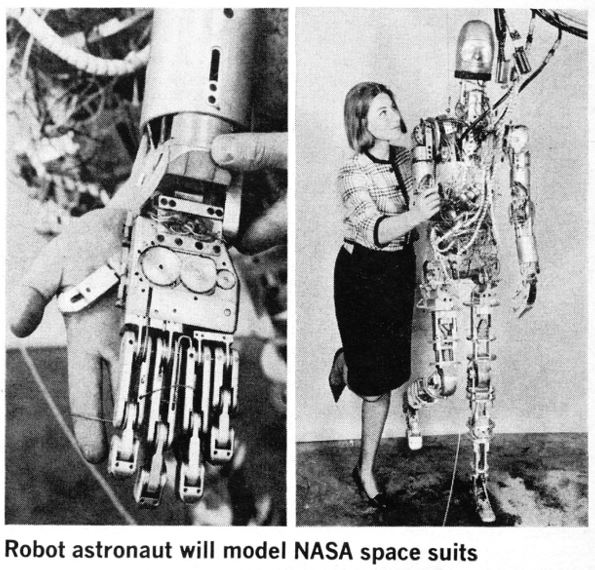 Still hard at work in 1967, but improved and prettier for picture taking, the PDAD rated another, more expansive article. 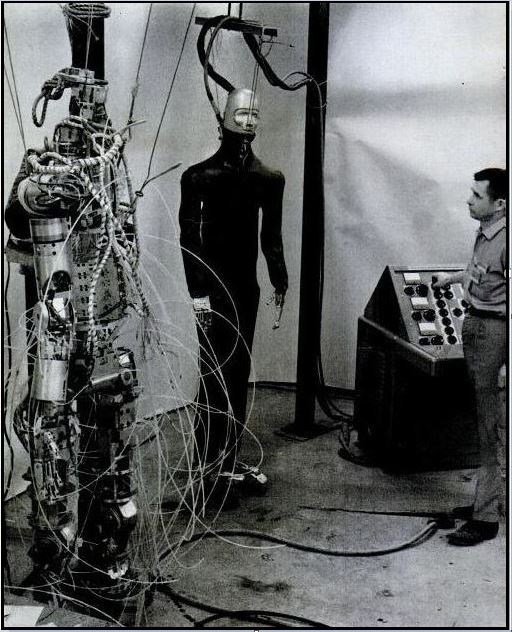 The dummies reproduce 35 basic human movements, ranging from arm, hand, and leg manipulations to bending and rotating at the waist. If you shake hands with a malicious squeeze, they can really give you your money’s worth, yet they can gently pick up an egg without breaking it. 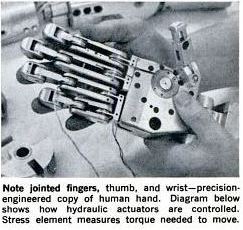 The nylon-tube circulatory system of the mechanical men carries lightweight oil at body temperatures and at a pressure of 1,000 pounds per square inch. In response to signals from an electronic nervous system, servo valves open and close to direct oil to hydraulic actuators – the “muscles.” …

“Move your arm upwards,” commands the operator by turning a potentiometer. The dummy obeys, and a built-in stress element at the arm joint measures exactly how much torque the movement requires. At the same time, a feedback potentiometer compares the position of the arm to the positron commanded. …

Add a brain and you’re got the first real robot!

NASA never limited answers to any one project. It had a bewildering array of competing projects from military and civilian minds that could be plugged in at any time. Even before the PDAD dummies got to Houston a “crewman simulator” had been in orbit, during a January 1965 test orbit.

Sitting in for Grissom and Young Tuesday were a pair of 160-pound electronic boxes called crewman simulators. Each was packed with about 90 pounds of wiring, batteries, lights, timing indicators, tape recorders, and electronic instruments. They were weighted with ballast to simulate the size and weight of men.

Although these dummies were to support piloted craft, some people already were of the opinion that robots would make better astronauts than people, an argument that has raged within the space exploration world for more than half a century now.

Back then, Dr. Ruth M. Davis, with the Defense Department’s Office of Defense Research and Engineering, started making speeches in 1964 advocating what she called “robot astronauts.” Looking at her actual proposals, though, it’s clear she was referring to automated spy satellites. Even so, the notion caught people’s attention because deaths of Russian cosmonauts had become public knowledge. Approving editorials soon appeared.

As many Americans will remember from the blow by blow accounts of the earlier astronaut orbits, the safety devices built into space capsules to give a distressed passenger every possible chance for survival are innumerable. Many could be eliminated of human life were not at stake.

Of course, automated satellites were not far from operation. A headline in a 1966 paper read “Robots Aid Astronauts.” Those robots were “unmanned scientific satellites” used to plot the extent of the Van Allen radiation belts and so create trajectories that would minimize astronaut exposure.

General Electric made robot voyagers a serious proposal in 1965 at the 16th International Astronautical Congress.

A capsule would carry the robot to a parachute-aided landing on Mars.

The robot, described in the paper as an “automated Mars exploration laboratory,” would be released from the capsule on landing. …

On landing it would scan its environment and send television pictures back to earth. Scientists on earth would look the pictures over and determine whether the robot should be moved….

At a likely site, the robot would be halted. Experiments would begin. The robot would scoop up Martian dirt and test it for life.

This is an amazingly good description of the Mars rovers we’ve been sending up since the 1970s. Are they real robots? Good enough for Sojourner and Opportunity to be inductees into the Robot Hall of Fame at the Carnegie Science Center in Pittsburgh.

The final proof of the popularity of robot astronauts came when the S. H. Horikawa company in Japan released the Rotate-O-Matic Super Astronaut Robot. He walked, he rotated, and after spinning around 360° his doors opened to show guns a-blazin’. He came in a plethora of variations, including the Super Moon Explorer. Now an expensive collectible, the robot astronaut sold for $3.99 in 1967 and got marked down the following year. Why didn’t every kid have one?

Once real astronauts reached the moon, the need for robot astronauts diminished, although The Brownsville [TX] Herald, on August 1, 1969, ran a grainy picture of Buzz Aldrin on the lunar surface “looking like a robot astronaut.” Maybe S. H. Horikawa was on to something bigger than they knew.

Steve Carper writes for The Digest Enthusiast; his story “Pity the Poor Dybbuk” appeared in Black Gate 2. His website is flyingcarsandfoodpills.com. His last article for us was Gyro Gearloose’s Little Helper His epic history of robots, Robots in American Popular Culture, is finally available wherever books can be ordered over the internet. Visit his companion site RobotsinAmericanPopularCulture.com for much more on robots.