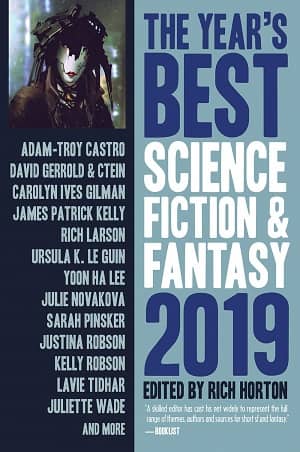 The latest volume of Rich Horton’s Year’s Best snuck up on me. I know, I’m supposed to be on top of these things. For some reason I was expecting it later in the year, but it popped up in my Amazon cart last week, in stock and everything.

Rich produces my favorite Year’s Best every year, but hasn’t always seemed totally comfortable with all the trappings of being an editor. He hasn’t shown the same enthusiasm for lengthy introductions or Yearly Summations that Gardner Dozois famously did, for example. But in the last few years Rich seems to have really found his voice, and these days I find I really enjoy his intros. He avoids Gardner’s critical edge, for example, focusing instead on the collegial nature of the science fiction community.

This year he gives an affectionate shout out to his nominal competitors for your Best of the Year dollars, including editors Jonathan Strahan, Ellen Datlow, Neil Clarke, and even Gardner, who passed away last year, shortly before his Thirty-Fifth Annual Collection was released, ending an era. Have a look.

There are a lot of Best of the Year volumes in our field, and frankly I recommend them all. One of the features of SF in 2018 is how much of it there is. There’s enough short fiction that the Hugo shortlist can very nearly ignore men, and still be mostly full of strong stories. (There are a couple of duds, but so it always was.) There’s enough that both the Hugo and Nebula shortlists can completely ignore the traditional print SF magazines (F&SF, Asimov’s, Analog, and Interzone, let’s say), and still be mostly full of strong stories. How then to resolve that issue? Read as many of the Best of the Year volumes as you can, I say! (And, hey, why not subscribe to one of the print magazines, if that’s possible? And try some original anthologies as well.)

The main distinction, of course, for each of these books is the editor’s individual tastes. (Or so Hannibal Lecter tells us)… if I think my book is the best — and I do! — it’s for the obvious reason that my personal taste aligns pretty closely with the editor’s! But that said, I am abashed year after year to realize that Jonathan or Ellen or Neil or one of the other editors, (or, sigh, Gardner!) has chosen a gem or two I really should have taken myself.

Here’s the complete Table of Contents for the 2019 volume of The Year’s Best Science Fiction & Fantasy.

There are more Year’s Best volumes in the pipeline this year, from John Joseph Adams, Paula Guran, and Ellen Datlow. The books published so far in 2019 include: