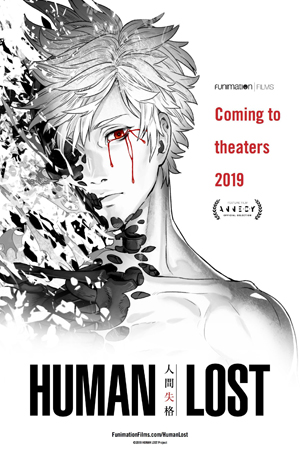 My second film of July 26 was in the big Hall theatre, a science-fiction anime called Human Lost (人間失格). Directed by Fuminori Kizaki, it was scripted by Tou Ubukata based on a novel by Osamu Dazai. The movie’s set in 2036, when advanced nanotechnology has given human beings a lifespan of 120 years but turned Japan into a deeply unequal society, with the wealthy sequestered inside a vast citadel called “the Inside.” Some people, for unclear reasons, metamorphose into monsters: the ‘Human Lost’ phenomenon. A troubled young artist, Yozo Oba (Mamoru Miyano), gets involved with his cyborg friend Takeichi (Jun Fukuyama) when he attempts to break into the Inside, and sets off a complex series of events which bring to light the truth about the Human Lost problem and the future of 2036 — but which also might drive Yozo over the edge of sanity.

Osamu Dazai was one of the most celebrated Japanese writers of the first half of the twentieth century; he died in 1948. I have not read his novel No Longer Human (which has the same name in Japanese as Human Lost), but Wikipedia tells me it is considered his masterpiece. Wikipedia also tells me that an alternate and perhaps more faithful translation of the title is “Disqualified From Being Human,” which is closer to the film title. I mention this because a glance at the plot outline suggests the film is otherwise pretty far from its source. More explosions, to start with.

The film takes the idea of a troubled, self-destructive young painter at odds with a stifling society in some counterintuitive directions. Let me put it this way: I had no idea while watching this film that I was watching an adaptation of a twentieth-century novel about alienation and anomie. I can see some connections, even with only the most cursory knowledge of the book. For example, the biotech that keeps people alive forces them to stay alive; suicide is effectively impossible, which is an interesting twist on certain things from the original story. The future society is something of a straitjacket more generally. Some characters have the same names and characteristics as those in the novel. The story’s divided into “notebooks,” which is a structural choice taken from the book.

There’s certainly a kind of ambition at work here. There’s an unusual feel for a violent cyberpunkish dystopia, a strange pacing that puts an emphasis on Yozo rather than on bigger and wilder battle scenes — for better or worse. The problem is, the movie never really manages to find a connection to something recognisable as real life. The action and futuristic plot points are what draw interest, and Yozo’s not charismatic or interesting enough to be intriguing on his own without reference to the larger plot. 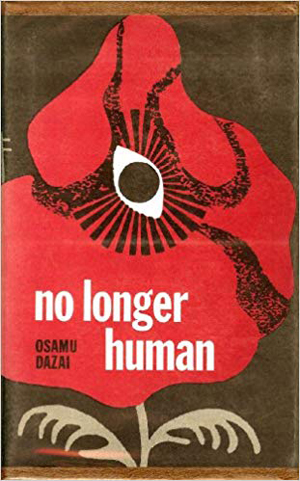 Visually, the movie’s a mixed bag. It plays out in a classic science-fictional anime style with beautiful sequences, particularly a running battle early on. Movement is fluid and well-realised, and fight scenes are spectacular and fast-paced. The future of 2036 is intensely envisioned, with technology and architecture and settings that are futuristic but not derivative or obvious. Some of the character designs are quite strong. But the closer the film comes to having to imagine a normal human being, the more of a problem it seems to have. Characters look stiff, or seem to stare at nothing. When we are shown Yozo’s art, it mostly lacks the power the dialogue insists it has; that might have worked, if the film had convinced us through dialogue and dramatic action that the paintings we see are only a shadow of what exists in the realm of the film — but it doesn’t.

Generally dramatic action in the film is less powerful than it should be. Many of the best set-pieces, which probably should be key structural elements of the plot, come relatively early. The action picks up at the climax, but the second act’s baggy, not so much slow as wandering. The tendency of the movie to fill time with exposition doesn’t help. In particular, the movie explains how its future world works through a lot of expository dialogue, which is a double problem. Firstly because the exposition’s so obvious. Second because the future doesn’t become real when it’s only talked about. We don’t really see much of the future beyond a relatively narrow cast of characters, so it’s difficult to relate to problems with a world we only hear about.

I also have to say that while I’m far from an expert on anime, I can’t help but notice a number of similarities to other movies and TV shows I’ve seen. Yozo’s depression and general sense of maladjustment reminded me of Shinji in Neon Genesis Evangelion. An opening action scene involving motorcycles on an elevated freeway can’t help but recall Akira. The nanotech life-extension program is named S.H.E.L.L., and that didn’t help me throw off flashbacks to Ghost In The Shell inspired by the general look and tone of the film. No one thing was necessarily a problem. But collectively there starts to feel like a lack of imagination in Human Lost. Its influences and inspirations, conscious or unconscious, are too plain and too undigested.

Maybe even more than any one, or any three, anime in particular is a general sense of a lack of originality in approach and structure. This future is familiar in its tone; this is an atmosphere we’ve seen before, and better. Characters express themselves in highly conventional ways. There is nothing actively bad in this. But also nothing new, nothing individual. Given how distant the film is from its source material, it’s hard not to think that there should be something more here, something more than just a subtextual energy.

Human Lost is often interesting to look at. And it does swing for the fences. But it doesn’t connect often enough. Melodrama is too obvious, and Yozo’s emotional turmoil too simple. For all the plot mechanics, there’s a flatness to the movie. It builds to an inevitably world-shattering finale, but the focus on Yozo’s personal issues does not to my mind come together in harmony with the main plot action. It’s an interesting attempt, but I can’t help but feel it’s a failure.