The mosque-cathedral from the air.
Photo courtesy Toni Castillo Quero via Wikimedia Commons

Córdoba was the center of Al-Andalus, and the mosque was the center of Córdoba. Thus Abd al-Rahman and his successor spared no expense. Artisans were imported from all corners of the Islamic world, and only the finest materials were used. Its most impressive feature is the hypostyle hall, pictured above, with a total of 856 columns of jasper, onyx, marble, granite, and porphyry. Most of these columns were looted from various Roman buildings, including a pagan temple thought to have been on or near the site. Since the columns were too short for the high ceiling the designers wished to have, they developed a double arch, with a semicircular arch buttressed by a lower horseshoe arch.

Within the mosque compound is the Court of Oranges, a garden filled with orange trees, plus a large central fountain that caught the breeze and cooled the area. During a hot day in the Spanish sun, it’s a relaxing place to linger.

Córdoba was one of the world’s great cities at this time. Historians estimate that in the year 1000 it had a population of 100,000. Its craftsmen made silks, jewelry, and leather work that sold across Europe, and the city had numerous palaces, schools, and gardens. 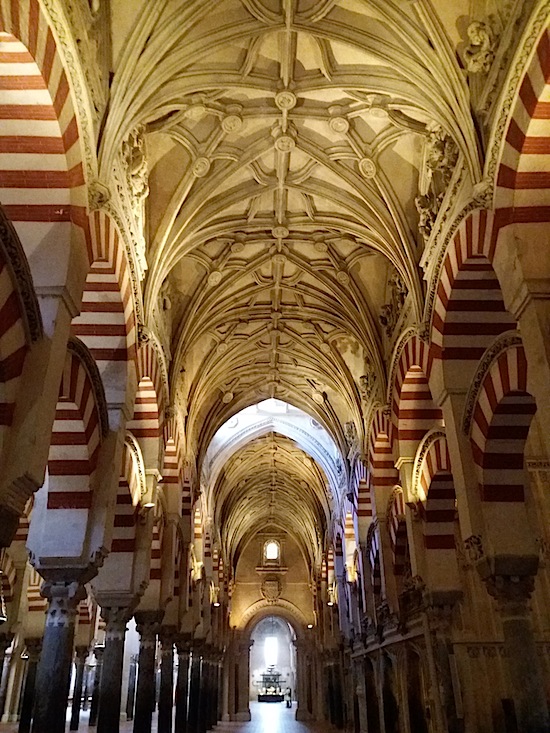 The Christians later added a Gothic ceiling to the hypostele hall

When Córdoba once again fell into Christian hands, the mosque inevitably became a church. Fortunately, the Spanish Christians were just as entranced by the building as the Muslims, and preserved large portions of it. Chapels were added in the great prayer hall, obscuring some of the view, and the rectangular, Moorish-style minaret was converted into a bell tower. 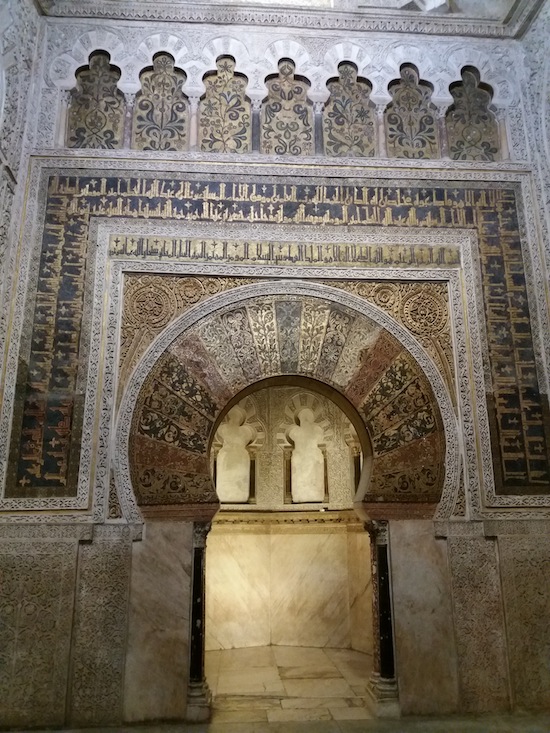 The gilded miqrab points worshipers in the direction
of Mecca. Oddly, the miqrab points south although in
reality Mecca is to the east-southeast

While this building is what makes Córdoba justly famous, there’s plenty more to see in town. We’ll check out the rest of it next week. 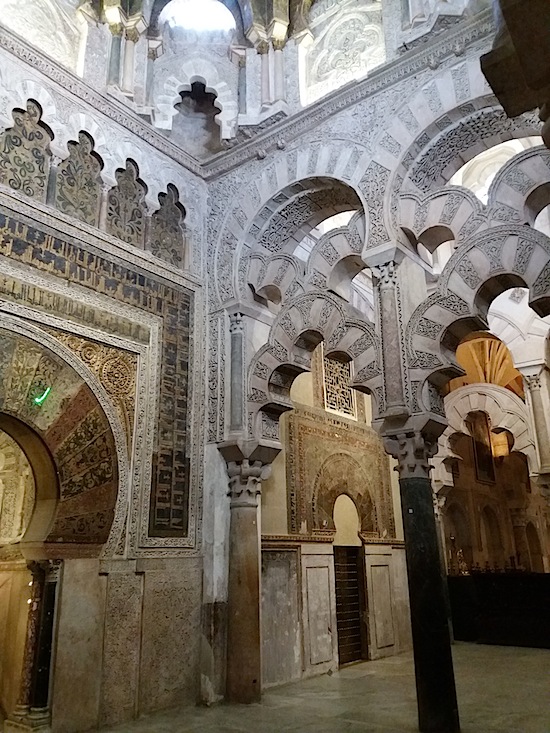 A curious variation of the double arch next to the miqrab 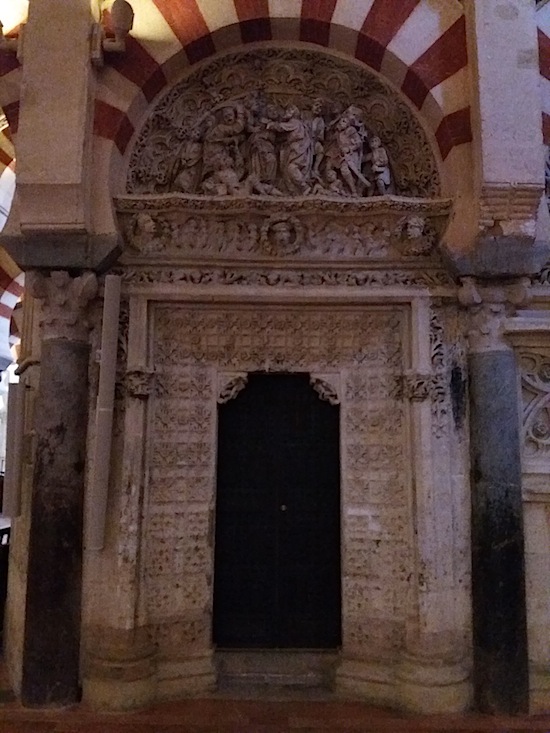 A Christian chapel inside the mosque 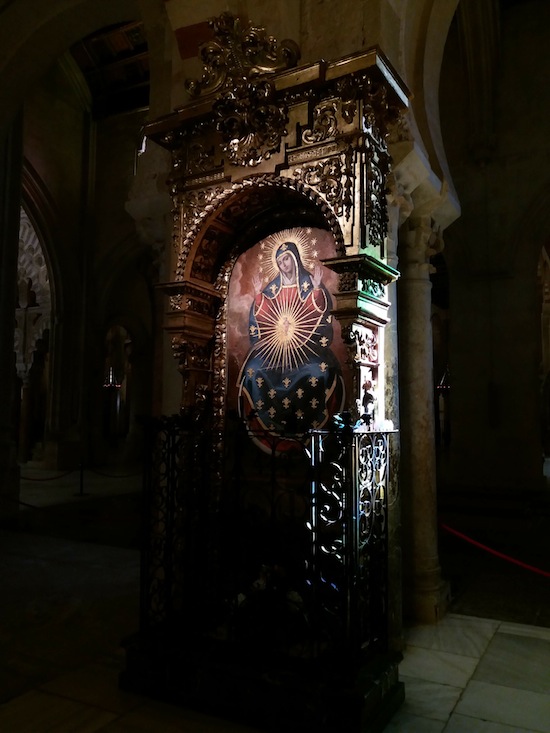 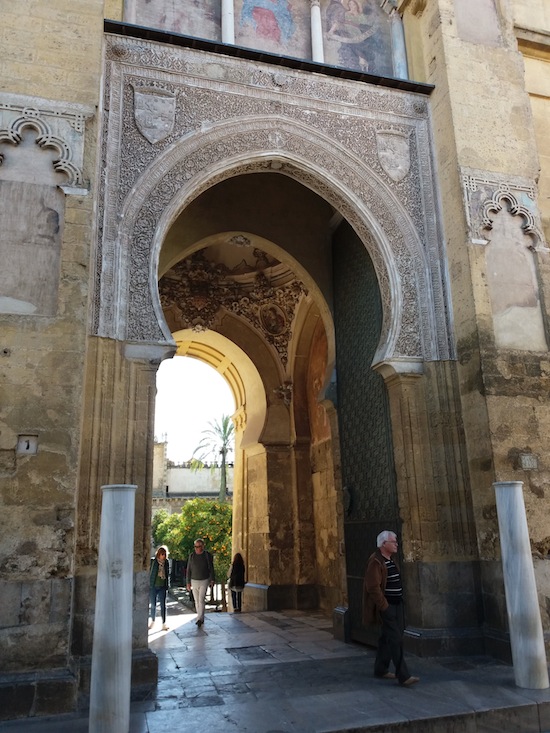 One of the gates into the mosque, with a view of the Court of Oranges.
Note the medieval escutcheons placed over the Islamic scroll work 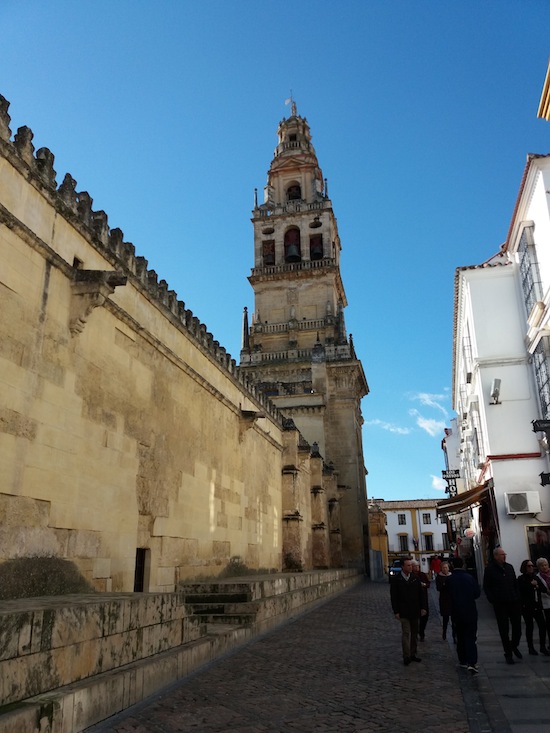 The outer wall of the mosque, with the minaret converted into a bell tower 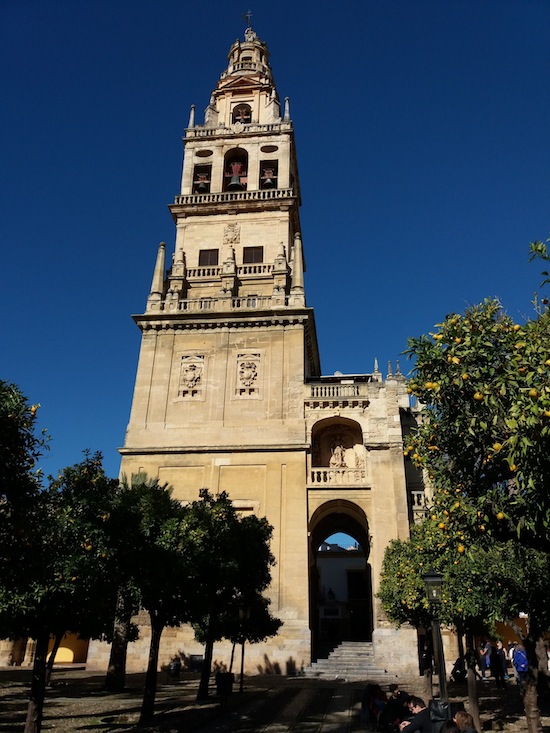 A view of the minaret/bell tower from inside the courtyard

In the collection Aurora in Four Voices, Catherine Asaro has an essay in which she discussed applying Fourier analysis to the arches in the Great Mosque of Cordoba and related it to her story “The Spacetime Pool.”