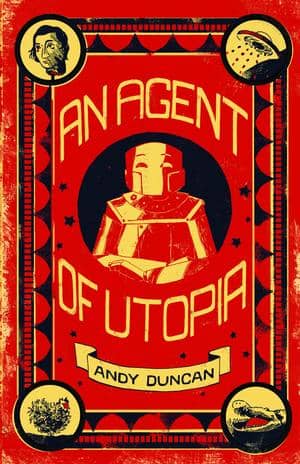 Andy Duncan is one of my favorite modern short story writers, and has been ever since the release of his first collection, the World Fantasy Award-winning Beluthahatchie and Other Stories (Golden Gryphon Press, 2000). I heard him read from that book at the World Fantasy Convention in Corpus Christi in 2000, and in 2018 I got to repeat that experience by being in the audience at this year’s convention in Baltimore while Andy read from his brand new collection An Agent of Utopia.

An Agent of Utopia contains a dozen tales, two of them brand new. They include multiple award nominees and winners, including the Locus Award nominee “Senator Bilbo,” which blended the tales of Bilbo Baggins and white supremacist Mississippi senator Theodore G. Bilbo, World Fantasy Award winner “The Pottawatomie Giant,” Hugo nominee “Beluthahatchie,” and no less than three Nebula nominees. Here’s the back cover text.

In the tales gathered in An Agent of Utopia: New and Selected Stories you will meet a Utopian assassin, an aging UFO contactee, a haunted Mohawk steelworker, a time-traveling prizefighter, a yam-eating Zombie, and a child who loves a frizzled chicken ― not to mention Harry Houdini, Zora Neale Hurston, Sir Thomas More, and all their fellow travelers riding the steamer-trunk imagination of a unique twenty-first-century fabulist.

From the Florida folktales of the perennial prison escapee Daddy Mention and the dangerous gator-man Uncle Monday that inspired “Daddy Mention and the Monday Skull” (first published in Mojo: Conjure Stories, edited by Nalo Hopkinson) to the imagined story of boxer and historical bit player Jess Willard in World Fantasy Award winner “The Pottawatomie Giant” (first published on SciFiction), or the Ozark UFO contactees in Nebula Award winner “Close Encounters” to Flannery O’Connor’s childhood celebrity in Shirley Jackson Award finalist “Unique Chicken Goes in Reverse” (first published in Eclipse) Duncan’s historical juxtapositions come alive on the page as if this Southern storyteller was sitting on a rocking chair stretching the truth out beside you.

Duncan rounds out his explorations of the nooks and crannies of history in two irresistible new stories, “Joe Diabo’s Farewell” ― in which a gang of Native American ironworkers in 1920s New York City go to a show ― and the title story, “An Agent of Utopia” ― where he reveals what really (might have) happened to Thomas More’s head.