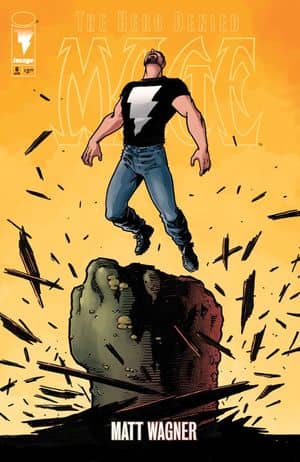 So I’m starting work on my review for Mage: The Hero Denied #9, when I realize that, while I wrote a rather lengthy review of issue #8, I never got around to posting it. Expect the next review in the next week or so.

See the previous reviews in this series here.

Being a fifteen-issue series, issue #8 is obviously the halfway point for the story and as such we expect it to be something of a turning point. And while some parts of the story are very predictable for a mid-point chapter, this issue did manage to surprise me a few times. The two starting points are Magda waking up in the villains’ lair and Kevin facing the ogre that trashed his house. Magda gets the stereotypical James Bond treatment, where her enemy sets her up in a luxury suite and promises to provide her with every comfort before killing her. And Kevin gets pummeled by a monster. But then both story threads go in unexpected directions.

It starts with the way that Kevin handles the ogre. His focus here is on finding his family and since killing the ogre won’t help him in that goal, he refuses to fight back. The result is that the ogre starts tossing him around while Kevin just keeps asking where his family’s been taken. This isn’t the strike-first and ask-questions-later approach that we expect from Kevin. It’s the tactic of a more responsible hero who is controlling his rage so that he can achieve a more important goal than just defeating the monster.

Back to Kevin, who continues to get pummeled by the monster, refusing to fight back until his questions are answered. But then he discovers that only Hugo and Magda were captured. Miranda is hiding in the rubble. Once he realizes that his daughter is there and could be harmed, he makes very quick work of the ogre, revealing that he could have easily killed the monster at any time.

Up until this issue, Magda has been training Miranda in the use of her budding magic abilities, while Kevin has been slowly revealing his heroic nature to Hugo. We’ve very much been presented with the idea that Miranda is Magda’s protégé and Hugo could well be the successor to Kevin’s heroic title. But now mother and son have teamed up to find a way out of the Umbra Sprite’s lair and father and daughter have to go on a quest to find them. It’s a nice little reversal of what a lot of readers were probably expecting at the midway point.

While I don’t know that we’re going to get a deep exploration of the gender roles that mothers teach their sons and fathers teach their daughters, it’s been pretty obvious which child each parent has been devoting more attention toward. Hopefully we’ll see Magda and Kevin not only teach their children something about the nature of magic and heroism, but also learn something as well. Who knows? Maybe Miranda will end up as the next hero and Hugo will end up as the next mage.

But the issue’s not over yet. Two of the Gracklethorns, Aleksi and Karol, have been watching Kevin’s fight from a safe distance, disguised in human glamors. Kevin and Miranda walk right past them, none the wiser. And while Aleksi is underwhelmed by the pudgy, balding man in a t-shirt, Karol is terrified. After all, Kevin took a direct hit from a cannon last issue, killed an ogre immediately afterwards, then walked away with his daughter held in one arm.

And here we see another parallel with the first series, Hero Discovered. In that series, Emil was the only Grackleflint to see beyond his father’s plans and develop his own opinion. In this series, it’s Karol who realizes just how daunting the task ahead will be for them. While the other Gracklethorns envision an easy victory, she knows that they’re in for a struggle. Far from leaving us with hope for the good guys, it instead becomes clear that Kevin can’t count on stereotypical supervillain arrogance to work in his favor. The issue ends with the Umbra Sprite agreeing with Karol’s assessment, while slowly mutating into a swarm of shadow snakes. “To Be Continued” indeed.

It’s been a slow burn leading up to this point and I still maintain that, for many readers, the series might be more enjoyable if they simply waited until the end and read the whole thing at once. On the other hand, following this story month after month does give me the chance to check in on other reviews, essentially forming a sort of running commentary track for the story while I read. In particular, the folks over at Mage: The Hero Described have been posting issue-by-issue reviews as well. Not only is it nice to read someone else’s take on the same series I’m reading, but they actually reference some of the reviews I’ve been posting, giving this whole thing a sort of back-and-forth feel.

So the big takeaway from this midpoint-in-the-series issue is that things are pretty much moving in the direction we all predicted, but not quite in the way most of us would have expected. Of course, Kevin’s family were going to be involved in his battle with the Gracklethorns, and bad guys abducting the good guy’s family is a predictable enough move. But I really expected Magda and both children to be taken, leaving Kevin alone.

And looking back, having Kevin work alone to save his family would have been dumb. Kevin’s biggest problem in this new series is that he doesn’t turn to his family for support nearly as often as he should. It’s clear that he views them more as a burden than a support system. And while Magda’s magic and Hugo’s enthusiasm have bolstered him along a little bit, Miranda has been all but ignored … so of course it makes sense that she is the one to help him. Karol predicts that Miranda will prove a hindrance to Kevin, but I think she will turn out to be just the opposite.

Just as interesting is the pairing of Magda and Hugo. While there’s certainly been plenty of examples in fantasy fiction of women taking on traditionally male heroic roles, I haven’t seen nearly as much being done with men taking on traditionally female heroic roles. And at the risk of starting a comment war, women have long held heroic roles in fiction. It’s just that their roles have tended to be non-violent. Sure, in the first Mage series, Edsel was a baseball bat-wielding partner to Kevin, while Mirth was an advisor who used non-violent magic and Sean was literally incapable of touching the bad guys. But in the second series, which focused on monthly nasty hunts, Kevin met a dozen other champions and noticeably none of them were women. In fact, the only prominent female characters in the second series were the three witches. Up until now, women in this story have primarily offered magical support while staying in the background. But is non-violent magic support really a “lesser” form of heroism? Who’s to say that Magda’s form of non-violent persistence doesn’t turn out to be the better form of heroism?

It seems as if a shorthand method of showing gender equality in fiction is to assign the traditional male “beat up the bad guys” action role to a woman. But maybe a good step to take in fighting “toxic masculinity” is showing more male characters in non-violent, traditionally feminine roles as well. We got a glimpse of it in this very issue, with Kevin trying repeatedly to talk with an adversary rather than simply beat it up. Perhaps it will be Miranda who shows him a better way to handle problems than simply fighting bad guys. Maybe that’s where we’re going with the subtitle, “The Hero Denied.” Maybe it won’t be the denial of all heroism, but just the denial of this one particular style of heroism.

Just as interesting is the strange development with the Umbra Sprite and the Gracklethorns. Unlike the Umbra Sprite in the first volume, who seemed to care very little for the welfare of his Grackleflint sons, here we see someone who truly wants to keep her children out of danger. Not only that, but she acknowledges her daughter Karol’s concern about Kevin Matchstick’s power. It will be interesting to see how much the Umbra Sprite is actually willing to sacrifice in order to acquire the Fisher King.

[…] Curated from Comic Bastards. Click the link below to read the full review.COMIC BAsTARDS » Mage: The Hero Denied 9 […]