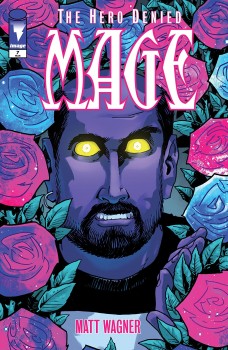 As promised, one Mage review is delivered right on the heels of the other one. Starting off, Kevin is still on the trail of the Questing Beast. He can see the Beast’s footprints thanks to some magic eye-drops that he got from a magic pot dealer last issue. When he finally catches up with it, he sees the Questing Beast communicating with a little devil-child (he calls it an “imp”). The imp and the Beast dash off just as the eye drops wear out, leaving Kevin nauseous and vomiting in a public waste bin.

Meanwhile, Magda is trying to shrug off the advances of the school superintendent, only to find out too late that he’s an incubus in disguise. It’s interesting that the succubi dress in little more than nylon body stockings, while the incubi seem to prefer tailored suits. Whatever draws the eye, I guess. Unfortunately, he recognizes her as Kevin’s wife (no idea how) and reports to the Umbra Sprite that he’s captured her.

By the time Kevin wakes up the next morning, his wife and daughter have been kidnapped. He arrives just in time to see his son lured onto a school bus with dozens of redcaps. While various monsters come and go throughout all three volumes of this series, the redcaps have been around since near the beginning and seem to be the go-to beasties when a villain just needs a nasty little army to do a quick and dirty job.

The issue ends with a green ogre destroying Kevin’s house.

So, in this issue, Kevin’s wife and children are kidnapped by the Umbra Sprite and his house is destroyed. Kirby’s dead and Joe’s made it clear that he won’t be helping on any further adventures. Kevin still has no idea about the third Mage’s identity. He has no home, no allies, and no idea what to do next. If he could put his ego aside, he would go to Magda’s two witch sisters (last seen in volume two) and ask for their help. But I’ve got a feeling that he’s going to try handling things alone.

I know that the title is “Hero Denied” and that implies some sort of defeat, but it is frustrating to see that Kevin still hasn’t picked up some fairly simple life lessons that both Mirth and Wally tried to impart in volumes one and two. He’s still basically fighting for the sake of fighting. He’s still searching for the Fisher King, but it’s doubtful he’ll know what to do when he finally does find him (and it would be vastly disappointing if Kevin didn’t have some sort of resolution to that thirty-plus year quest). We’ve seen at the end of volume one that the Fisher King is an actual physical being, so there isn’t going to be any of that cop-out “the Fisher King was inside you all along” crap. The villains have a very clear concept of what they’ll do if they capture the Fisher King and go about it in a methodical fashion. Kevin, on the other hand, is just wandering around and hoping to run into a clue. He’s frequently called the “Pendragon” and addressed as if he’s a modern-day incarnation of King Arthur, yet we see precious little leadership coming from this man.

And perhaps, in the end, this will be the meaning of “Hero Denied.” Not necessarily the death of Kevin Matchstick, but the acknowledgement that acting like a stereotypical hero (wandering from one fight to another) is not the way to solve certain problems. Kevin is a rootless character, despite having a wife and children. He’s constantly wandering away from his family and never seems very engaged in anything they do. Frankly, besides the magic debit card that he uses to provide money, he probably doesn’t even have to be around the house day-to-day.

And since these comics are both semi-autobiographical and in some ways allegories for the life of everyman, we can all relate to that sort of existence a little bit. How many fathers spend so much time at their jobs that they feel like little more than financial support systems for their families? When they do make an attempt to connect with their wives and children, they find themselves baffled by the workings of their own families. The end of “Hero Defined” left us with so much hope that Kevin was growing up, finding a way to combine his heroic drive with a relationship, finding that “work/life” balance. But that doesn’t seem to have happened.

Sadly, I’m predicting that the next issue will be a knock-down, drag-out fight similar to the one in issue #4. Unfortunately, Kevin may have the epiphany at that point that he functions better as a hero when his family isn’t present … that he’s considered them a burden all this time, despite never putting such a thought into words. And this may be the failing of a hero … someone who is so adept at defending the community that they’re no longer able to function peacefully within it.

Mage #7 is available in print at all decent comic shops, as are back issues to volumes one and two of the series. If you prefer getting your comics digitally, then check out Mage: The Hero Discovered, Mage: The Hero Defined, and all the latest issues of Mage: The Hero Denied at Comixology.