My day job is being an academic here in Minneapolis, where I mainly teach philosophy and theology. So when I attempt to go to academic conferences I tend to go to cons related to either of those subjects. But a couple of years ago I went out on a limb, academically speaking, and sent a paper proposal to a literary conference.

Why? Well, I had a “literary” idea for a paper. Oh, and the conference was taking place in Orlando in the middle of winter. So my Minnesota-self was quite motivated to get there. Surprisingly I got my “philosophy” paper accepted to this conference and I was excited to attend, so excited that I ended up going again this year.

The con in question is the International Conference for the Fantastic in the Arts, ICFA for short, and it’s been going on now for almost forty years. ICFA is the official conference of, named aptly enough, the International Association for the Fantastic in the Arts. This organization was started in 1980 by literature professor Robert A. Collins (1929-2009) and like most small beginnings it has grown quite a bit but it still has a laid-back, workshop (though still professional) feel to it. 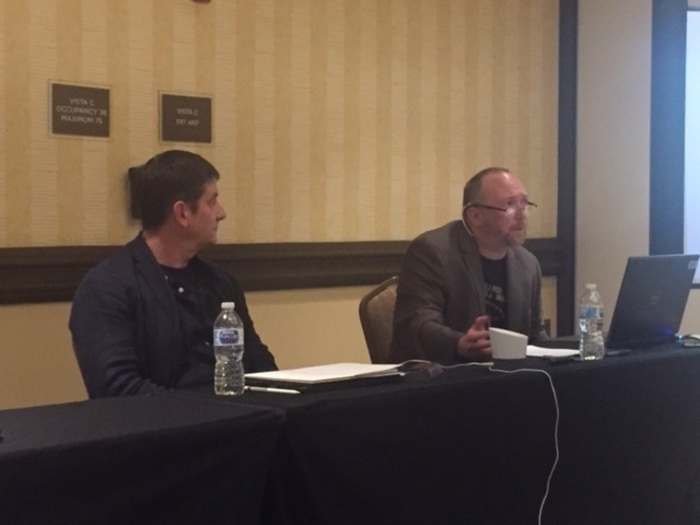 ICFA is fairly different from your average academic conference. Like most such conferences there are plenty of professor-types, as well as grad students. And every subject from English, media studies, critical studies, and education majors are represented. I’ve even met more than one librarian at these conferences.

But it’s more than just academic types, or at least academic types alone at ICFA. There are also lots of fiction authors, plenty of which you might’ve heard of. You typically see names like Stephen R. Donaldson, Paul Tremblay, and Ann Leckie. And you can be walking down the hall and pass people like Peter Straub, Kij Johnson, and Ted Chiang. It’s a very interesting and somewhat surreal mix.

The academic panels and discussions are very engaging. I’ve been around more than my share of BS, pseudo-intellectualizing. But the conversations I’ve been involved in at ICFA are high caliber and interesting, especially since they’re about issues related to fantasy, sci-fi and horror. So for an academic who also geeks out about genre literature stuff, this is a really cool conference. 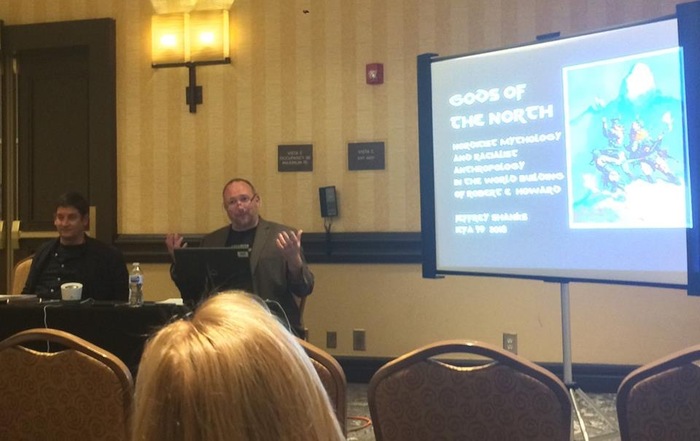 As you would expect at a literary conference, ICFA also has an interesting book room with both used and new books. This past con I found an old 80s fantasy bibliography for about $2. There are also author signings at different times and days throughout the conference, if you’re into that sort of thing.

But I have to say that the highlight of ICFA is connecting with old friends and new people. My first year (last year), I really didn’t know anybody. But that quickly changed. I went to a few Lovecraft and Robert E. Howard panels and — bam! — I was “in.” Last year I met pulp scholar Jeffrey Shanks, REH scholar Dierk Günther, and mathematician and Lovecraft enthusiast Dan Look. It was cool to meet up with those guys again.

This year I met also horror writer J. T. Glover, who has a cool story in The Children of Old Leech Laird Barron tribute anthology I reviewed a few years ago. This time around I also met Peter Balestrieri, sci-fi archivist librarian at the University of Iowa, who interestingly is a former band member of Violent Femmes! Interesting and cool people. 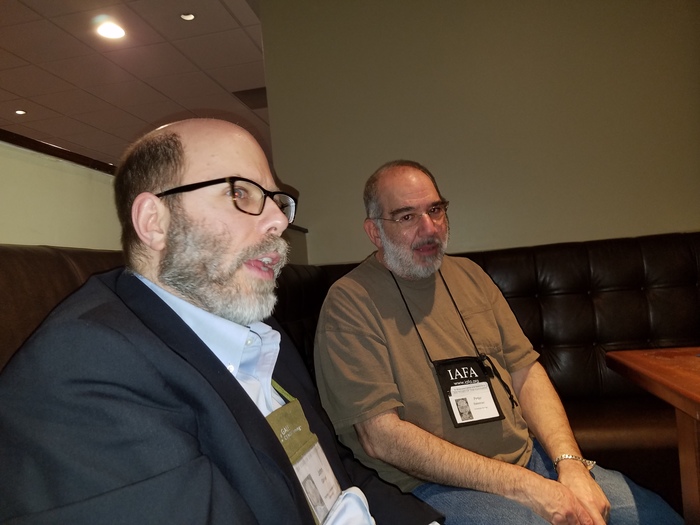 Almost any con-goer knows that the real fun at any convention happens at the bar. Get around a table with a few good friends who are into fantasy/sci-fi/horror and a few good good libations, and good conversations are sure to follow. This was my second ICFA, but I had a great time, and plan on returning next year — if they want me!

Had an awesome time James! Already looking forward to next year.

[…] (more about that down the road). James McGlothin captured his experience nicely, if you want to take a look, over at Black Gate. Here are a few […]