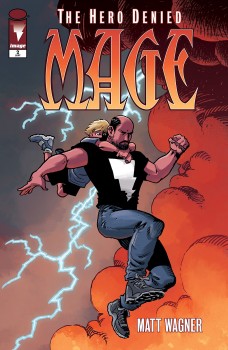 So, the basic setup for the new Mage series is shaping up to be similar to the previous two volumes. At least one big fight scene and LOTS of talking. Seriously, you sign up for Mage and you’re signing up for lots of dialogue. As far as the issue breakdown goes (LIGHT SPOILERS AHEAD), it’s 7 pages of Kevin and Magda arguing, tucking their kids into bed, and going up to the attic; 4 pages of evil insurance adjusters literally swallowing nightmare fuel; 4 pages of Kevin and Magda talking about a magic crock pot while Hugo stares out a window; 3 pages of Kevin taking his son out for lunch; and 5 pages of Kevin fighting a pair of flaming goat-men. I’m enjoying the series so far, but fair warning, that’s the sort of issue breakdowns you’re going to get, so if you prefer more action and less chatter in your comics, then you’re probably better off passing on Mage.

Was the above paragraph filled with spoilers? Sort of, a little bit. But none of it really felt like plot development so much as plot outlining. Issue two is still very much in the “setting up the story” stage, but as with the previous issues, the magic of this series is in all of the little details. The Gracklethorns reveal that they’re even less human than they initially appear and we start getting names, as well as distinctions between the five of them. Kevin cooks dinner, implying that the domestic duties are more evenly split between Kevin and Magda than I’d thought at the end of issue one. Magda’s hesitation to leave their home is based more on not wanting to disturb some magic spells she’s brewing than on a desire for pure domesticity. And the house is a rental, meaning they don’t have as much money as they initially appeared to have. Still no clues about Kirby, Joe, or the Mage. Hugo is reading an Animorphs book, which firmly dates this story at least fifteen years in the past.

We still have no idea what Kevin does for a living. I’m actually bothered by the idea that he’s just living off of a magic ATM card instead of holding down some sort of job. It makes the whole “raising a family is the ultimate adventure” vibe feel sort of hollow if he’s basically living like a guy who won the lottery. Also, if it’s really been eight years since Kevin stopped using Excalibur, then he fell back into the habit pretty easily. Maybe this is a case of him no longer being a reluctant hero, but a man eager to re-live his glory days.

Magda goes through a rather lengthy explanation about what’s in the crock pot and it comes off a tad contrived since, obviously, she has no reason to tell Kevin stuff he’s known for eight years. Also, we learn that she began the spell when she was pregnant, which makes Hugo seven years old and his behavior is believable for a well-adjusted seven year-old.

In volume one, the bad guys were based in a casino, perhaps highlighting the chaos they would sow across the world. In volume two, the bad guys were basically working out of a hole in the ground with no connection to the mundane world. This time, they’re based out of an insurance agency. And the switch from a gambling hall to an insurance agency certainly is suggestive. An organization that profits off people’s fears of what the future holds?

Magda’s plan involves creating an impregnable homestead where her family will be safe from all magic attacks. Not only does that suggest the same fears of the future that the Gracklethorns are exploiting, but it also goes against everything that Kevin has learned in the last two volumes. Evil cannot be blocked or kept out. There’s no such thing as a true “safe space” and hiding from evil is never anything more than a temporary solution that leaves other people vulnerable.

Another nitpicky point: someone must have seen Kevin attacking two giant flaming goat men in a parking lot. Except that the same misty black forest seemed to surround them that surrounded the nasties from the last issue. So is Kevin shifting between the mundane world and some magical realm when he fights these creatures? Is that why only Hugo seems to notice what’s going on?

Of course, part of the experience of reading Mage as individual issues is reading the letters published in the back. Robert Muehlberger notices something about the cover that I totally missed, but now can’t unsee. It also proves that I’m not alone in reading a deeper symbolism into this series … other people see it too. Why not take a look for yourself?

Mage #2 is available in print at all decent comic shops, as are back issues to volumes one and two of the series. If you prefer getting your comics digitally, then check out Mage: The Hero Discovered, Mage: The Hero Defined, and all the latest issues of Mage: The Hero Denied at Comixology.