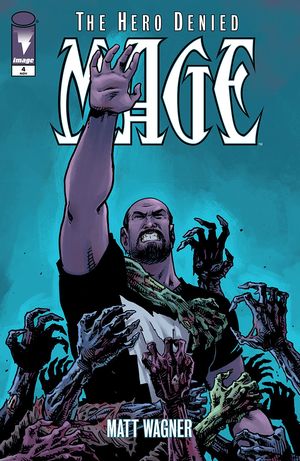 A short review this month simply because there’s not so much to unpack here. The Umbra Sprite, the Gracklethorns, Kevin’s wife, and Kevin’s children are all absent from this issue. Meaning that it’s just Kevin and some monster lady that we’ve never seen before (and will probably never see again).

Really, this issue is meant to tie us back to themes from Hero Discovered and Hero Defined, so if you haven’t read those titles first, none of it will make any sense to you. The Queen of the Unending Dead tells Kevin that he’s the reincarnation (or avatar) of Gilgamesh, which is something broached in Hero Defined. She also tells him that the Lord of the Hunt has a claim on his soul, which is something already suggested in Hero Discovered. Then he fights an army of zombies. Then he kills the Queen of the Unending Dead with an exploding park bench. Then he falls off a cliff. Then he gets in an argument with an ATM.

Honestly, after five issues in (I’m counting issue #0), I get why some people might start pulling out of this series. Comics are expensive, we’re in almost twenty dollars deep here, and we really haven’t gotten that much of a story yet. Yeah, Matt Wagner’s art is always crisp and vibrant, no matter what he’s drawing. But Kevin pretty much wandered away from everyone else in the plot to have a fight with yet another monster and hasn’t learned anything that he didn’t already know from the first two volumes of this series. I get that, from the title of the series, he’s not going to win this one, but it feels weird that we’ve got an antagonist who’s still making the same mistakes after all these years, partially invalidating the value of his supposed lessons in previous books.

Of course, I’m sticking around to the bitter end on this one. But if the rest of you want to save your money and come back at the end for the collected edition, I totally understand.

Mage #4 is available in print at all decent comic shops, as are back issues to volumes one and two of the series. If you prefer getting your comics digitally, then check out Mage: The Hero Discovered, Mage: The Hero Defined, and all the latest issues of Mage: The Hero Denied at Comixology.