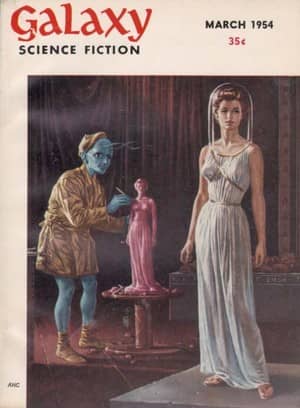 The March, 1954 issue of Galaxy Science Fiction features a cover by Ed Emshwiller. I’m not certain how easy it is to see, but I like how he added EMSH to the symbols in the background.

“The Telenizer” by Don Thompson — Langston is a reporter who becomes a target of someone with a telenizer. The device, once honed to someone’s brain waves, can change a person’s perception of reality. One countermeasure is drunkenness, but Langston opts for a neutralizing device that he can carry in a briefcase.

Langston starts a story on himself, beginning with an investigation on Isaac Grogan. Langston did an expose series on Grogan years ago on bribery and corruption, which eventually led to the man’s arrest.  Now that Grogan is free, he has motive for revenge. But there could be more at play than the obvious.

I like the premise and some of the action sequences; the story has a good pace. I couldn’t find much information on Thompson, which made me think the name could be a pseudonym for another author, given that this is the longest story in the issue. But I’m not turning up anything.

Maybe someone else (e.g. Rich Horton) has more information.

“The Littlest People” by Raymond E. Banks — Space labor forces are shipped cheaply by placing people in stasis while being shrunk to just a few inches in size. John’s father is the personnel director on an asteroid and meets with Mr. Mott, who arrives with new people available for hire. As John wanders the ship, he finds one of the little people — a woman — lying on the floor.

He picks her up and means to tell Mr. Mott, but there’s a bit of chaos at that moment, and John pockets her. Later, his sister brings the tiny woman (whom she names Gleam) out of stasis by accidentally injuring her leg. So John begins caring for Gleam like a pet while she bemoans her uselessness because of her permanently injured leg.

This is a really intriguing tale by Banks, and aside from some physical violence, it’s a good coming-of-age story. 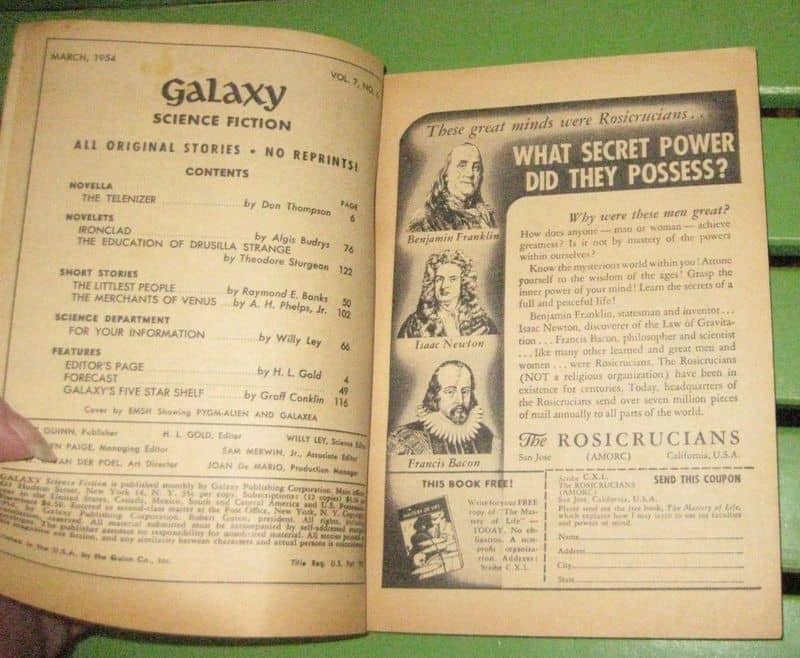 “Ironclad” by Algis Budrys — Cottrell is 26 and head of the family, guiding their drills for protection against any enemy in New York. His is the fourth generation since society as we know it collapsed and reformed. Now there are rules. Now there is integrity. Those rules are getting in Cottrell’s way of courting the young woman he’s interested in, yet he feels compelled to defend them, fearing what society might become without them.

I love how Budrys describes this future world. Without giving too many specifics, he describes a generation that had a bloody war, another that fought house to house, and then a third generation when someone reorganized society into something safe. It feels very plausible. And the characters play off each other well; they seem like real people.

“The Merchants of Venus” by A. H. Phelps, Jr. — Rod Workham has been trying for six years to find the right type of colonizers for Venus. As each group arrives, they resign almost as quickly, leaving few people on the planet, aside from military personnel. The population of Earth is swelling, and Venus is an ideal place to expand (keep in mind, this is 1954). But it’s a rough environment, lacking the same amenities of Earth. A historian named Homer Jaimison suggests an entirely different plan than Rod — one that he thinks might be more suited for successful colonization than anything Rod has tried.  So without knowing what Homer has in mind, Rod agrees.

I think this is more interesting from a philosophical point — what kind of people would be best suited to colonize a new planet? It’s more of a curious opinion than a story, but I think it works on that basis. The story was adapted for the radio program X Minus 1 in 1957. This may be the only story Phelps published. This is the second author of this issue whom I’m not finding much information on. I’m starting to think we need a way of tracking down the families of these little-known authors to find out more details of their lives. Not to be invasive, but I’m so curious about them. 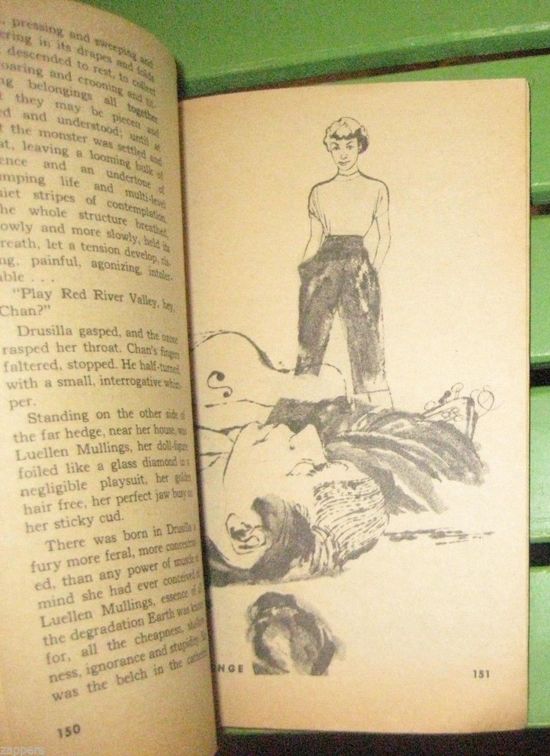 Art for “The Education of Drusilla Strange”

“The Education of Drusilla Strange” by Theodore Sturgeon — Exiled to Earth for murder, Drusilla (a name she adopts) refuses to succumb to the torture. Orbiting satellites, undetectable by anyone on Earth, project beautiful imagery and music to her. It’s all to remind her of the perfection of her home that she will never return to. But she’ll use her advanced mind to do as she likes on Earth and perhaps find a way to fight back — or to at least draw enough attention to herself that they’ll be forced to kill her, ending the torture.

Sturgeon gets my vote for best story in the issue, which has very stiff competition from Banks and Budrys (votes had to be recounted multiple times). As always, Sturgeon is a master of characters, and in my opinion, it’s the characters that drive any story. I can’t watch random people saving a universe if I don’t care about them (I’ll avoid pointing fingers, but I’m seeing a dull pattern in certain genres of movies these days). Drusilla is an intriguing character, and as readers, we learn more of her as she progresses through her own tale.

Matthew Wuertz’s last retro review for us was the February 1954 issue of Galaxy.

While Thompson only published four stories in the SF magazines, he was a major figure (along with his wife, Maggie), in comics fandom. (Maggie, by the way, was the daughter of Betsy Curtis, whose story “The Steiger Effect” got a lot of notice, and who you’ve encountered in this series of reviews.)

Thompson may be best known for co-authoring, with the fine author (and Hugo winner) Richard A. Lupoff, the seminal book about comics, ALL IN COLOR FOR A DIME.

Are there any hanging chads in your ballot counting room?

Thanks for taking us through this vintage issue. Any chance of more images of interior art?

Rich – Thanks for the info on Thompson. It was a difficult decision for picking a favorite story this time, but all ballots seemed to be on the level.

Major Wootton – I’ll have to think about that for future reviews. Thanks for the suggestion.