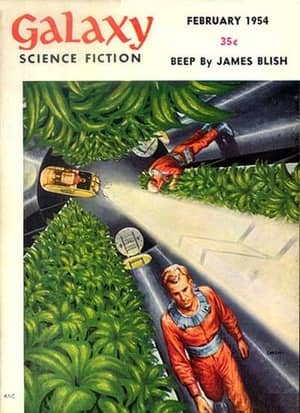 The cover for the February, 1954 issue is titled “Spaceship Hydroponics Room” by Ed Emshwiller. We’re growing some hydroponic tomatoes at home, so the future is now!

“Beep” by James Blish — The Dirac communicator allows instantaneous communication between two devices, regardless of their distance. This gives an immense military advantage to those in the galaxy who possess it. But a shrewd reporter named Dana Lje uncovers something of much greater importance, hidden within a beep that precedes each message. And she sets her own terms for revealing her findings.

This story felt more like a science article expanded into a narrative, where characters are talking about the theoretical science. It didn’t feel much like a story to me. I found the science intriguing enough, but it makes me wonder if a concise article on the subject would have had the same effect.

“The Boys From Vespis” by Arthur Sellings — The Vespians arrive on Earth for their own purposes, and they’re all extremely attractive men. Herbert and other local guys can’t get any attention anymore because of the recent competition, and he’s had enough. He goes straight to the leader of the Vespians to demand that something be done.

It’s a pretty short tale, and it earned a light laugh from me toward the end. Arthur Sellings is a pseudonym for Arthur Gordon Ley, a British author and scientist. He had six novels and many short stories published. Unfortunately, he died of a heart attack at age 47 in 1968.

“Pet Farm” by Roger Dee — A three-man team explores the planet Falak — a small, arid planet that doesn’t rotate. Their job is to look for survivors from the war with the Hymenops — an insect race that attacked humans 200 years ago. The humans they find are all in their mid-twenties or younger and unable to communicate effectively in English. While there are a myriad of explanations for the absence of older humans, they hope to find the cause so that the planet can be recolonized in the future.

There’s a good, mysterious plot that unveils nicely. This story is part of his series that follows the crew of the Marco Four. I reviewed a previous story titled “Wailing Wall” that appeared in the July, 1952 issue.

“Inanimate Objection” by H. Chandler Elliott — Major Angus Burnside is confined in a mental ward due to his strange theory. He believes that there is a force at work which does not want matter crafted into items and hates humans for what they’re doing. For the moment, it chooses to retaliate by minor mishaps — sleeves catching on nails, bottles spilling on paperwork. But these are mere skirmishes before the war.

This felt more like Elliott wanted to see how far he could take a concept that has no real proof — to see if he could string readers along into a really strange hypothesis. I suppose it makes for an interesting premise, but it seemed so far-fetched that it was almost laughable. Elliott published a handful of short stories and a novel, all in the 1950s.

“Project Hush” by William Tenn — The army sends a team to the moon to establish a base. But they soon discover an unnatural dome near their area. They need to understand its purpose and possible threat as quickly as they can.

I’m not keen on pieces that seem like extended jokes, which is how Tenn’s story felt to me. It wasn’t that long, but it seemed like the entire purpose was to get to a zinger that needed a laugh track.

“The Passenger” by Kenneth Harmon — After serving as a teacher on a distant world for a few years, Lenore travels aboard a ship bound for Earth, excited to restart her young adult life. She looks forward to meeting someone to share it with. And then a young man aboard the ship calls to her telepathically. Perhaps he’s the one she’s been hoping to meet.

I did not see this one coming. And I recommend it. Harmon leads the reader through the story, but only too late do you realize that although it has the appearance of science fiction, it’s actually another genre.

“Two Timer” by Fredric Brown — Brown presents two flash fiction pieces (labeled vignettes by Gold). One is titled “Experiment,” and the other “Sentry.” Use your favorite search engine to search for “Fredric Brown experiment.” It’s worth the quick read.

“Men Like Mules” by J. T. M’Intosh — Tony is a naval captain, returning to Earth with his crew to evacuate the thousands who remain. Humanity has expanded to distant worlds, but the sun has grown cold, so Earth is only habitable around parts of the Equator. Tony tries to reason with Earth’s leader, Wili, who refuses to leave. And he fares no better with Jan, a young woman who, like others of Earth, is stubborn but also more advanced in her thinking than him. He’s not certain he can convince anyone, and in the process, he finds himself drawn more toward Jan, though she struggles with her own unrequited love.

This was a really good story, and I can’t decide if it edges out Harmon’s or not. Too close to call, I suppose. The only thing I found a bit jarring was at one point when Tony considers slapping Jan for becoming too upset (in his mind). I realize there is always a cultural shift in reading older stories, so I don’t want to seem too judgemental on the single point. But it pulled me out of the story for a moment and drew other thoughts.

Overall, I think this was a good issue. My copy is in poor shape due to the fact that someone cut out half of the back page in order to join the Science-Fiction Book Club. But I suppose I can’t fault the original owner for that…

Matthew Wuertz’s last retro review for us was the January 1954 issue of Galaxy.

I like “Beep” a lot, actually. Blish expanded it to a very short novel, late in his life, THE QUINCUNX OF TIME.

Does the Harmon story reach the same conclusion as Poul Anderson’s “Journeys End”?

Rich, I haven’t read “Journey’s End” so I can’t say. We may need to have an offline discussion about it, lest we end up spoiling two stories for people.

re: “Beep”, I just finished Bish’s CITIES IN FLIGHT and yeah… his characters have these long technical conversations with themselves, it’s almost like Blish was kind of working out the logical conclusions for his various technologies and then talking himself out of them so he could get the story to go the way he wanted!

Matthew, I found a copy of “The Passenger” on Project Gutenberg, and it’s not the same ending as the Anderson story, though it is in the same genre, arguably.

I remember liking “Beep” better than The Quincunx of Time, though I’m not sure why, now–it’s been a while since I had either story in front of me.

Campbell-era sf had a lot more time for what is still sometimes called “idea fiction”–as if all fiction didn’t involve ideas. I think JB was trying to shore up the fiction with the fantasy of a beautiful and brilliant woman throwing herself at the “dumpy underpaid person” of the hero. Blish had a notion, which he talks about somewhere in the Atheling books, that the emotional impact of sf rests largely on such daydreams, given weight and authority by the corroborative detail of the fictional world. (I may not be doing his argument justice.) One of his examples was the giant spaceships from Clarke’s Childhood’s End.

I’m not saying that all this stuff means “Beep” actually works. Juvenile fantasies often come with an expiration date, and anyway Blish’s practice wasn’t always up to his theory. But by ’54, probably any mistake he was making he was doing on purpose, if you know what I mean.

Thanks for the review. This is a fairly massive and worthwhile project, and I always come away with something to think about from your reviews.

Rich, glad you were able to find it. 🙂

James, I understand what you mean with “Beep”. It just didn’t quite work for me, but not everything does. And I appreciate the encouragement. That means a lot to me.