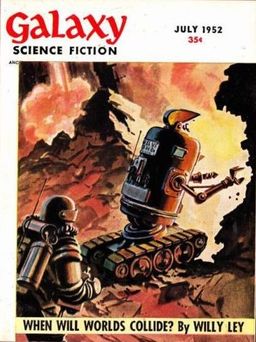 Sporting a robot miner on the cover (art by Jack Coggins), Galaxy’s July, 1952 issue invites readers inside. And it doesn’t disappoint!

“Star, Bright” by Mark Clifton — A single father observes that his four-year-old daughter, Star, has an impressive intelligence level. He doesn’t understand exactly how high it is until she begins to use telepathy.

The story has an interesting premise, but I’m not sure I liked where the story went. It seemed a bit too far-fetched at points.

“Wailing Wall” by Roger Dee — The crew of the Marco Four interacts with the colony on Sadr III. The Sadrians had been under the control of an alien race known as the Hymenops, which could explain their odd behavior. Since the crew’s landing, over a hundred people in the world’s only village have died as a result of murder or suicide.

I think the story would have been better without the initial flash-forward. Otherwise, it was a good read. Roger Dee is a pseudonym for Roger D. Aycock. The crew of the Marco Four return in “Pet Farm” (published in the February, 1954 issue of Galaxy) and “Control Group” (in the January, 1960 issue of Amazing Science Fiction Stories).

“Origin of Galactic Slang” by Edward Wellen (illustrated by David Stone) — This is a compilation of fictional anecdotes around “galactic” terms and phrases.

I’m not sure if this qualifies as a story, but I found it amusing. It’s listed in the table of contents as a “Non-Fact Article”. Wellen wrote eight such “Origins of Galactic X” articles.

“Dumb Martian” by John Wyndham — A brutish man named Duncan Weaver stops at Mars before beginning a five-year contract. His assignment is managing a sporadically-used wayload station on a satellite that orbits one of the Jovian moons. To keep himself sane, he pays a Martian family for their daughter, Lellie. He’s not attracted to Lellie and believes she lacks any intelligence. It’s simply a matter of avoiding complete isolation, provided he can stand living with her.

I think most readers would immediately dislike Duncan Weaver, and that’s obviously by the author’s intent. So it’s interesting to watch Lellie emerge as a character through Duncan’s point of view. It works rather nicely. 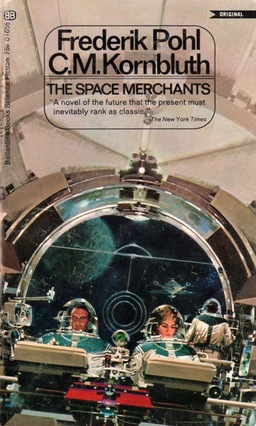 “Shipshape Home” by Richard Matheson — Ruth tries to convince her husband that their apartment is too good of a deal. She’s certain that it’s front of some kind, no doubt run by the creepy janitor. Her friend Marge, another tenant in the building, agrees. Despite his best efforts to stay level-headed, Ruth’s husband decides to investigate the matter with her, and the truth is unbelievable.

Matheson does a great job of character interaction. The dialogue feels real, and I really empathized Ruth as she struggles to the point of losing her sanity. I do wish they hadn’t included artwork on the final page that illustrated the ending — such a spoiler.

Gravy Planet, Part 2 by Frederik Pohl and C. M. Kornbluth — Mitchell Courtney finds himself on a ship bound for Chlorella plantations in Costa Rica. The social security number tatoo on his arm has been amended with extra digits, giving him a new identity. When he tries to prove who he is, he learns that Mitchell Courtney is officially dead — that someone placed a dead body with his identity in Antarctica.

At the plantations, Mitch performs menial tasks and finds himself a victim of an endentured society. No matter how much income he earns, it’s never enough to pay back the constant debt for food or other necessities. And the food he’s given only leads to an addiction to those ingredients so that he must continue to pay for them.

To escape, Mitch befriends a seasoned worker named Herrera, hoping he can learn how to move up the ranks and possibly earn freedom. Herrera, however, turns out to be an agent for the conservationists, a group that does what it can to oppose consumerism. Though he’s appalled at what they stand for, Mitch agrees to join the group because it seems to be his only method to return to New York.

When he’s able to get back to the city, Mitch tries to contact Fowler Shocken, only to learn that his boss went to the moon. So Mitch tries to improvise his plans, doing his best to stay one step ahead of his enemies.

This was my favorite piece of the issue. I normally don’t gravitate toward the novel serializations, but this has so much engaging action. I kept waiting to see what would happen next, and I couldn’t get through the pages fast enough.

Gravy Planet was published as a novel under the title The Space Merchants in 1953. It concludes next issue.

Matthew Wuertz’s last retro review for us was the June 1952 issue of Galaxy Science Fiction.

Indeed, this issue did not disappoint. I enjoyed each story and uncovered one intriguing mystery, which I will describe below.

Anyone who has smart kids can relate to “Star Bright.” I have two very smart kids who slowly came to the realization that most of humanity does not share their love of knowledge and objective truths as they grew up. It is a fascinating process to observe especially in your own family. I could easily relate to the father who was torn between letting his daughter explore and develop her intellect, and protecting her. Yeah, the ending was not perfect, but the narrative captures the joy and struggle of parenting nicely.

“Wailing Wall” is an interesting social commentary that just misses. I (also) could have done without the teaser at the beginning. I left this story unsure about the message, if it was just a simple warning about mind control or even religion (“Right now they are victims of a rigid religious code that makes it impossible for any one of them to express his wants, hopes, ideals or misfortunes…”), or if there was a deeper meaning that I did not detect.

“Origins of Galactic Slang” was mostly amusing. Some of the anecdotes were head-shakers and some were hilarious. The real issue here (for me) is the art work. I was sure that the illustrator, David Stone, had worked on “Donald in Mathmagic Land” after looking at his work with this story. I have been unable to confirm or reject this idea. IMDB and other sources don’t seem to have full listings of the artists involved in that project, and there are several artists with the same name that pop up on Google. If anyone has more internet savvy than me and can figure it out, please let me know.

“Dumb Martian” was interesting and fun, despite the obvious stereotypes and somewhat predictable story progression. The science and the unique setting makes this a winner. A number of causes, such as misogyny, multi-cultural tolerance, and education are addressed.

Matthew, you are not supposed to peek at the last page before you read the story! The illustration does give away the ending, but surely you saw it coming before you made that last page turn 🙂 This is a classic premise of questioning the sanity of the one person who knows something untoward is going on. It develops nicely, even predictably, and I enjoyed it very much.

“Gravy Planet” continues along at a crazy pace. The hideout for the connies (what we would now call environmentalists) at the food plant was ingenious and disgusting! I admire the resolve Mitch has in working his way back up through the ranks to regain his former life. I have to wander, though, if his ultimate motivation, his wife Kathy, is worth the trouble. I am sure the authors are hinting that their reunion may not be all that he is hoping for, and that a nicer consolation prize may be in the works. I would never presume to be able to predict what these two brilliant authors may be up to, so I will just have to wait and see. I have read a lot of scifi short stories from this era that end up with the hero getting back the girl of his dreams, even though she may be less than desirable. We will see.

I can’t wait to dive into the next issue. By the way, my Galaxy collection is now just one issue from being complete. That Summer 1980 issue continues to elude me. Let me know if anyone spots one on any of the usual auction sites. See you next month.

Gus, thanks for your commentary. I can’t help but look at the artwork when it’s in the pages. And that gets me in trouble at times where the artwork is ahead of the story. 🙂

Good luck collecting the final issue. Hopefully you can track it down.

[…] Galaxy for Black Gate, starting with issue 1, dated October, 1950. His most recent review was the July 1952 issue, containing stories by John Wyndham and Richard Matheson, and the second installment of […]

[…] If you’re interested in vintage science fiction magazines, Rich Horton has been reviewing individual issues of Galaxy (and other vintage science fiction digest magazines) for us for the past few years. And Matthew Wuertz has taken on the ambitious project of reading and reviewing the Gold issues of Galaxy for Black Gate, starting with issue 1, dated October, 1950. His most recent review was the July 1952 issue. […]