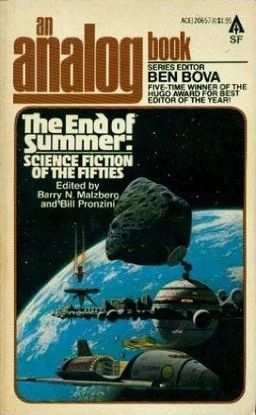 We’ve had some discussion here in the last week on the relative merits of the top science fiction digests of the 1950s.

Bob Silverberg offered his opinion that Galaxy magazine took the lead in the field virtually with its very first issue in October 1950, saying “That first year of Galaxy left us all gasping.” And in his Astounding Science Fiction Testimonial, John Boston generally concurs, saying that 1958 was the last good year under editor John W. Campbell.

Over the weekend, I was surprised to run across an interesting and impassioned defense of Astounding magazine in, of all places, the introduction to The End of Summer: Science Fiction of the Fifties, a 1979 paperback edited by Barry N. Malzberg and Bill Pronzini, which collects ten short stories from Isaac Asimov, Poul Anderson, Alfred Bester, Fritz Leiber, C.M. Kornbluth, and others.

Here’s the complete text of the editors’ Prefatory Note:

Six of the ten stories in this anthology are from John W. Campbell’s Astounding. This preponderance was not a publishing decision — Conde Nast gave us complete editorial decision — but our own.

No 70,000-word anthology devoted to the 1950s can give more than a sketchy representation of that tumultuous and fertile decade in science fiction. Accordingly it was felt that a deliberate bias toward Astounding had purpose and would give this book particular value. Concordance on the decade (which will come under increasing challenge as academia’s tanks roll on and on into our little backwater) overrates the not inconsiderable role of Gold’s Galaxy and the Boucher/McComas Fantasy & Science Fiction while somewhat minimizing Astounding, which is felt to have peaked in the forties.

Not quite so. This book is entered in evidence. 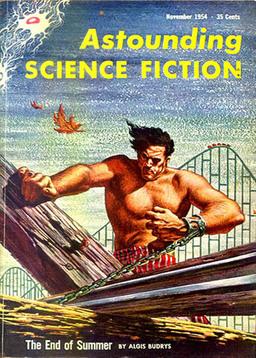 It seems this debate has been going on for at least the last 40 years (if not longer). And I found it especially interesting that there appears to be no debate that Campbell’s Astounding peaked in the late 40s/early 50s… the debate appears to be centered around whether the magazine was in decline by the end of the 50s, or much earlier than that.

As for the book itself, it’s something of a mixed bag. In his introduction Malzberg writes, “The level of short-story writing during the decade… has never been equaled,” and it’s clear he really means it. Some of the stories he chooses to illustrate it however — such as the overly talky and rather predictable “Darwinian Pool Room” by Isaac Asimov, in which a group of scientists sit around on their lunch hour and debate whether evolution is proof of the existence of God — fall rather flat in 2015.

On the other hand, C.M. Kornbluth’s “The Altar at Midnight,” which follows a very observant narrator and the young spacer he meets as they bar hop across half a dozen drinking establishments, may be one of the finest SF stories ever written. It’s clear proof (if any is needed) that science fiction is literature.

If you’re interested in vintage science fiction magazines, Rich Horton has been reviewing individual issues of Galaxy (and other vintage science fiction digest magazines) for us for the past few years. And Matthew Wuertz has taken on the ambitious project of reading and reviewing the Gold issues of Galaxy for Black Gate, starting with issue 1, dated October, 1950. His most recent review was the July 1952 issue.

The title story of that anthology, Algis Budrys’ “The End of Summer”, is truly a masterpiece, and a somewhat neglected one.

Books like this one are crucial among other things for showing us some forgotten stories. And compare the TOC with the Greenberg/Olander SCIENCE FICTION OF THE FIFTIES, an excellent book on its own, perhaps “better” than Malzberg and Pronzini simply because longer … but Malzberg and Pronzini bring us a completely different set of stories, also thoroughly worthwhile. (And I could easily put together another, not intersecting at all with either books, that would be just as good.)

John Boston’s thesis, seems to me, was that the true decline of Astounding came in 1959, so it doesn’t really contradict Barry’s point — though Barry will be sure to remind us that into the ’60s Campbell still introduced worthwhile writers, not seen much elsewhere, like Rick Raphael.

> compare the TOC with the Greenberg/Olander SCIENCE FICTION OF THE FIFTIES, an excellent book on its own,
> perhaps “better” than Malzberg and Pronzini simply because longer … but Malzberg and Pronzini bring us a completely
> different set of stories, also thoroughly worthwhile. (And I could easily put together another, not
> intersecting at all with either books, that would be just as good.)

Right you are! In fact Brian Aldiss and Harry Harrison, in DECADE: THE 1950s, *did* put together a third SF anthology covering the 50s… and it has absolutely no overlap with either of the other two volumes.

Pretty impressive! There’s probably an interesting blog post in there…

> John Boston’s thesis, seems to me, was that the true decline of Astounding came in 1959, so it doesn’t really contradict Barry’s point

Yeah, true, although Barry seem very determined to defend Astounding in the pages of THE END OF SUMMER. It’s an interesting book, and Barry’s comments (which are highly opinionated, and bracket every story) added a lot to my enjoyment of the book.

Really? Darwinian Pool Room? That story felt so much like Gold called Asimov, asking for something short to fill in an issue, so Asimov dug something up out of his trunk and sent it to him.

There were so many other stories to choose from in Galaxy.