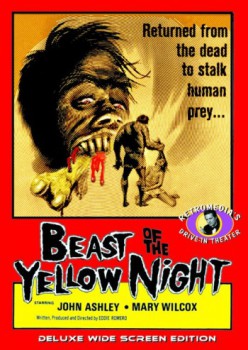 [MANNING] Look what I’ve got.

[OZ] Another Mill Creek Entertainment 20-movie pack, huh? “Beyond the Grave.” Why? Why do you keep buying these things?

Why? Why not, my friend? Twenty movies for seven bucks on sale at Shopko — think of all the monsters and mayhem and manliness for a measly 35 cents a movie!

Or, looked at from a slightly different angle, you paid seven dollars to squander away approximately thirty hours of your life.

No! You don’t expect me to sit through those crappy movies, do you?

What do you think I’m paying you for?

You don’t pay me anything.

How much of my beer and whisky do you drink?

I have to tranquilize myself for these cinematic torture sessions.

Whatever it takes. You bring some respectable scholarly credentials to the proceedings.

Nothing could bring respectability to this detritus from the bottom dregs of pop culture.

See — that was good! Bloody poetic, that was. Now, grab yourself a beer, kick back, and prepare for immersion into the first film in this collection, BEAST OF THE YELLOW NIGHT.

You’ll have to turn it up. The sound transfer on these cheap-o compilations  is usually hellacious.

“Hellacious” — is that good or bad?

Written and directed by Eddie Romero. Any relation to George Romero, you suppose?

God-awful film transfer, as to be expected. Every five minutes, the Mill Creek logo pops up in the lower-right corner. Which makes you wonder: why would anyone want to take credit for this? They’re actually worried I’ll make a pirated one-off from their shoddy one-off?

The “yellow night” of the title is, I guess, because the whole film takes place in “a small town in southeast Asia.” I didn’t see any nights in the film that were any color other than the usual color of night, which is, uh, the color dark.

Which also makes the title of the film racist, which I guess fewer people would point out when this film was slapped together in 1971.

John Ashley is Philip Rogers. His lovely blonde wife Julia, played by Mary Wilcox, has no idea that he was once Joseph Langdon, a WWII soldier who went AWOL in the Filipino jungles.

Though he’s a tall, dark, and handsome young stud, he’s actually old enough to be her grandfather. And he has a tendency to change into a demon and go on killing sprees.

Hey, this plot has a lot of similarities to The Incredible Hulk.

Sure, Rogers/Langdon just wants to live a normal life with his lady love, but he has this curse that periodically changes him into a rampaging beast. He takes on a new identity, but his cover is blown because he can’t control the Beast’s outbursts —

Sure, any werewolf story —

— aaand his transformations are triggered by anger. And check this out — in one scene  he transforms  because he’s about to get it on with his wife. The sexual arousal triggers it — just like the scene with Ed Norton and Liv Tyler! 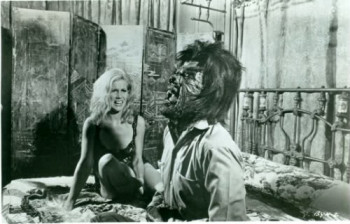 I interpreted it as being triggered by his wife wanting him to say he loves her. The demon in him won’t let him acknowledge love.

Oh. I suppose that makes sense too.

Anyway,  in this case, it’s not gamma radiation that brought on the curse, but a deal with the Devil made back in 1946 when he was starving in the jungle.

Isn’t it odd that Satan in this movie  looks like Buddha?

What can I say nice about this film? A few things, surprisingly, considering it is a film I never wish to sit through again.

The acting isn’t half bad. Ashley brings a Bill Bixby/Bruce Banner gravitas to his curse. Wilcox is believably traumatized to discover her husband has a tendency to transform into a demon — hmm, that makes for some interesting Freudian subtext. And, most impressively, the detective and police inspector are intuitive, serious, and pretty damn good at their job — which is quite shocking for this genre, where the authorities usually come across as hapless, clueless dopes.

Believable dialogue, especially among the law officers, considering they’re discussing the possibility of a man who may be seventy years old but doesn’t look a day over 35 because he is inhabited by an immortal demon. For a cheapie-flick writer/director, Romero is not a bad writer.

And the mean things you have to say? C’mon, I know you’re just bursting to unload.

The whole movie is slow and plodding in that ‘70s drive-in “the audience is doped up and/or fondling each other and not really paying attention anyway” sort of way. The camerawork is terrible, and it’s terribly lit. In many of the night scenes it’s almost impossible to tell exactly what’s going on — which has the one benefit of masking the nearly non-existent special effects. The washed-out, grainy film transfer makes it worse. Did they find this film in a can moldering in someone’s basement?

They probably did, and thank the film gods that they saved this genre classic from rotting out of existence.

And, look, there is only one monster in this pic, the “Beast” of the  title. You’d think with just the one monster, they could do better than slap some putty on the guy’s face, spray him green, and put him in a fright wig. I could outdo  this with a Halloween make-up kit from Spencer’s. But, David, it had boobies and it had a monster, so you’ll probably give it…

I’ll give it two.

That was hilarious! Some times we do our own Mystery Science Theater for laughs, this sounds like the perfect movie.