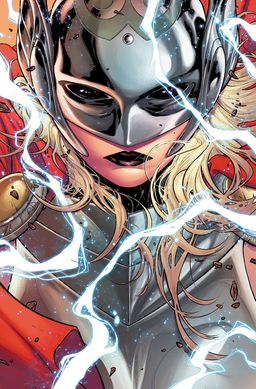 When I was a kid monumental events in comics, like the death of Gwen Stacey or the defeat of Thanos, were discussed in excited whispers on the playground. Not so these days. When Thor, the God of Thunder, became a woman, Whoopi Goldberg made an exclusive announcement live on The View on July 15th, 2014. Times sure have changed.

Now, Thor didn’t actually change sex, or anything like that. Thor is still, well, Thor. But he’s the God of Thunder because — as has been well established in Journey into Mystery #83 and the awesome party scene in the upcoming Avengers 2 — he is worthy to wield the mystical hammer Mjolnir. Over the 52-year history of Marvel’s Thor, other individuals have also proven worthy, including the alien Beta Ray Bill, Captain America, Odin, and even Conan the Barbarian and Superman. Last year Marvel revealed a dramatic twist in the saga of Thor, when he became unworthy to lift the hammer for the first time, and the mantle of Thunder God was taken up by an unknown woman who lifts Mjolnir in Thor’s place. The first six issues of the new Thor comic will be collected this May. As predicted, the shift has drawn a whole new audience — including my daughter, who confesses it’s her new favorite comic.

Mjolnir lies on the moon, unable to be lifted! Something dark has befallen the God of Thunder, leaving him unworthy for the first time ever! But when Frost Giants invade Earth, the hammer will be lifted — and a mysterious woman will be transformed into an all-new version of the mighty Thor! Who is this new Goddess of Thunder? Not even Odin knows… but she may be Earth’s only hope against the Frost Giants! Get ready for a Thor like you’ve never seen before, as this all-new heroine takes Midgard by storm! Plus: the Odinson clearly doesn’t like that someone else is holding his hammer… it’s Thor vs. Thor! And Odin, desperate to see Mjolnir returned, will call on some very dangerous, very unexpected allies. It’s a bold new chapter in the storied history of Thor!

Thor Volume 1: Goddess of Thunder was written by Jason Aaronand and illustrated by Russell Dauterman, and will be published by Marvel Comics on May 26, 2015. It is 136 pages in hardcover, priced at $24.99. Digital editions are available through Marvel’s online subscription service.

I’ll have to ask Gabe about his take on this series — he’s a huge Thor fan and an avid comic reader, so I’m guessing he’s probably following it.

Man, I love that party scene from the new Avengers movie. That just encapsulates what superhero team-ups are all about.

> Man, I love that party scene from the new Avengers movie. That just encapsulates what superhero team-ups are all about.

I know… it’s a terrific little scene with lots of great bits, like that tiny moment where it looks like Steve Rogers will be able to lift the hammer, and the look on Thor’s face.

Most of the internet buzz about the party is about who the mystery woman who’s only briefly shown is. Lots of conjecture.

It’s certainly done what it was intended to do, anyway… I’m anxiously awaiting the movie!

That and the new Ms. Marvel have gotten me back into reading comics after a long absence.