Mel Hunter’s “Flight Over Mercury” is featured on the cover of the January, 1954 issue of Galaxy Science Fiction. It’s much more interesting than the actual surface of Mercury, which looks a lot like our moon.

“Natural State” by Damon Knight — The major cities of the United States operate as industrial nations of their own while the rest of the country becomes agricultural. The cities repeatedly try to subjugate those in the country, but the cities’ technology can’t compete against the genetic engineering of those in the country.

Alvah is sent from New York to open trade with the outsiders — the Muckfeet — in hopes of bringing them into a civilized world and to support the needs of the city. When he meets with the Muckfeet, he finds that they consider him backwards – that those in the cities are the uncultured, uncivilized people. It’s up to a young woman named B.J. to reeducate him, if he’ll listen.

It starts a bit slow for me, but once Alvah is among the Muckfeet, the story plays out well. Alvah and B.J. have good tension between them (mostly in the form of B.J. trying to get Alvah to understand reality), which turns into chemistry as the story progresses.

“Lulungomeena” by Gordon R. Dickson — At Station 563 of the Sirius Sector, a young man named William Peterborough loves to gamble. And he’s good at it. But Clay Harbank, near retirement age, won’t gamble with him, and Clay’s sizeable savings are a continual lure for William. Clay says he gambled enough in his past and that any gains are easily lost. So William tries another tactic, making snide comments about Clay’s beloved home world of Lulungomeena. His plan is a simple one — to force Clay into a gamble about the loveliness of Lulungomeena as judged by someone who’s able to be completely impartial.

The twist ending earned a grimace from me. It felt more like a bad pun. But the characters are what matters in this story, and they make the story worthwhile despite the ending.

Dickson won three Hugo awards and one Nebula award during his writing career. He wrote numerous short stories and novels. Two of his more popular series are the Childe Cycle (also known as the Dorsai! books) and the Dragon Knight. 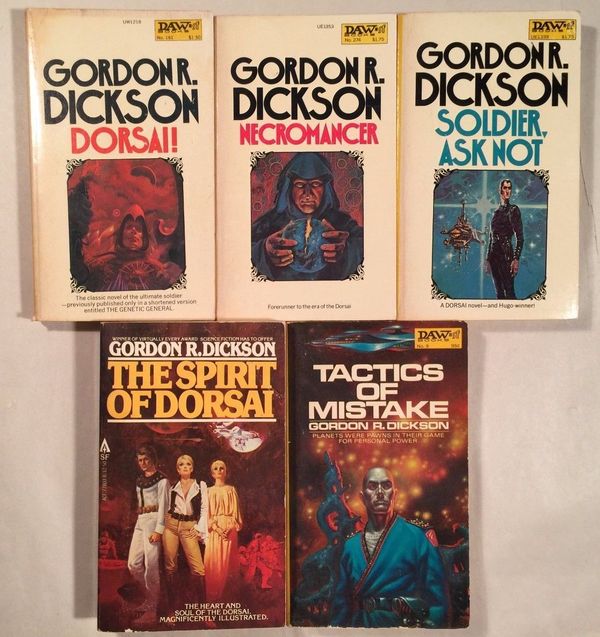 The first five books in the Childe Cycle

“The Big Trip Up Yonder” by Kurt Vonnegut, Jr. — Gramps Ford and generations of his offspring live together in his small apartment. Anti-gerasone keeps them all alive and young in appearance, except for Gramps, who was 70 when it was invented a century ago. There’s a lack of privacy and constant jockeying for the best seats near the television, as well as beneficiaries in Gramps’ will, which he continually changes when anyone upsets him. It’s not great, but it’s the way life is.

I wasn’t that impressed by Vonnegut’s story. It just didn’t connect with me.

“The Holes Around Mars” by Jerome Bixby — A crew exploring Mars find holes in the rocks and surface — vertical holes. Each one is four and three-eighths inches in diameter and perfectly round. And they go through any obstacle, aligning across long distances. Whoever or whatever bored the holes is unknown, but they’re determined to find the source.

The overall plot is intriguing, but the explanation of the holes is completely implausible. I won’t spoil it for anyone who wants to read the story, but even in the early 1950s, this just doesn’t make sense. Read Steven Silver’s take on the story in his January 11th Birthday Review for Jerome Bixby, published here last week.

“Backlash” by Winston Marks — The Ollies, an alien race from Sirius, come to Earth, seeking asylum. They offer to produce powerful biological servants named Soths. The Soths are able to cook, clean, and do many menial tasks without imposing on their masters. Cliff Collins agrees to be the first to receive one, and if it goes well, his company will help in distributing the Soths to anyone who can afford them.

Like most science fiction, of course, things go wrong. But that’s the fun of it!  I thought I knew where it was going but was wrong. I’m not sure many readers would anticipate exactly where the plot is heading, which is a good thing, in my opinion.

Matthew Wuertz’s last retro review for us was the December 1953 issue of Galaxy.

Nice cover! The stories don’t sound so great, though.

Major Wootton, it wasn’t one of the better issues. Can’t win ’em all, I suppose…