“The Dark Door” by Alan E. Nourse — Harry Scott hides in an apartment, waiting for them to find him. Who they are, he doesn’t know. But they aren’t men. He tried to learn about them only to become their target. He can’t go to the police. But if he can get back to the center where he works, he might find help. Unless the mysterious not-men get to him first.

I like the feel of this story. It’s not clear what’s happening, and as a reader, you aren’t certain if you can trust the main character’s point of view because it’s clear he’s unstable.

I’ve mentioned this in a past article, but Nourse wrote a novel titled The Bladerunner in 1974. And Ridley Scott bought the rights to the title “Blade Runner” for his 1982 film (which was based on Philip K. Dick’s novel Do Androids Dream of Electric Sheep?). I mention this again because of the recent release of Blade Runner 2049. And if you haven’t seen that movie yet, what are you waiting for? 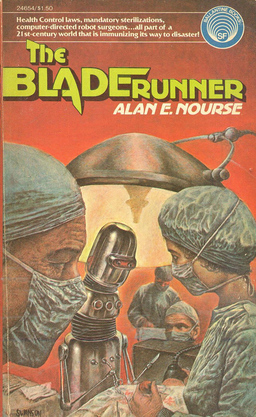 “One Man’s Poison” by Robert Sheckley — Hellman and Casker are headed for a red dwarf. Their ship has plenty of fuel to return to the Calao space station, but through someone’s mistake they’re out of food. They choose a mountainous planet in the system, hoping to find something to eat. Within one of the mountains, they discover a ring-shaped building built around a peak. When they enter, they determine the building is some type of warehouse. Everything is labeled with alien writing. It’s possible there’s something edible among the various containers, but just because something’s edible doesn’t make it safe.

The premise is more interesting than the story itself. It’s not bad, though.

“Mr. Costello, Hero” by Theodore Sturgeon — A ship transports a man named Mr. Costello to another world. Mr. Costello was once a leader back on Earth but had a falling out of some sort. The crew, aside from the captain, adores the man, including the purser. The purser reflects on the changes Mr. Costello suggested — always having at least two people together at all times to ensure everything is done correctly — and thinks they’re all the better for it.

Months later, when the purser returns to Mr. Costello’s world, he finds a society that shuns individuality — where no one can ever be alone because no one is trusted. Yet Mr. Costello is there assuring everything is perfectly fine and safe, so perhaps there’s really nothing to worry about after all.

Sturgeon does an excellent job in showing how someone can take a simple concept and poison a society. I don’t think it’s so much a commentary on the specifics of what Mr. Costello suggests but on how easily we can all be manipulated by innocent-sounding, logical ideas that conceal a dangerous agenda. The story delivers creepiness very well. And, as always, Sturgeon spells out his characters with such detail and uniqueness.

“Hall of Mirrors” by Fredric Brown — Norman Hastings awakens in a closet. He then enters a locked room and realizes some of the items are futuristic. He has no idea how he got there. A sign attached to the door informs him that the door is on a time lock and that there is a letter for him on the desk.

Written in second person, Brown’s story reads almost like a computer adventure game, and I mean that in a good way. Granted, there were no such games like that in 1953 that I know of, so Brown didn’t intend for this affect on me. I think even those who haven’t played such games would find this story intriguing. 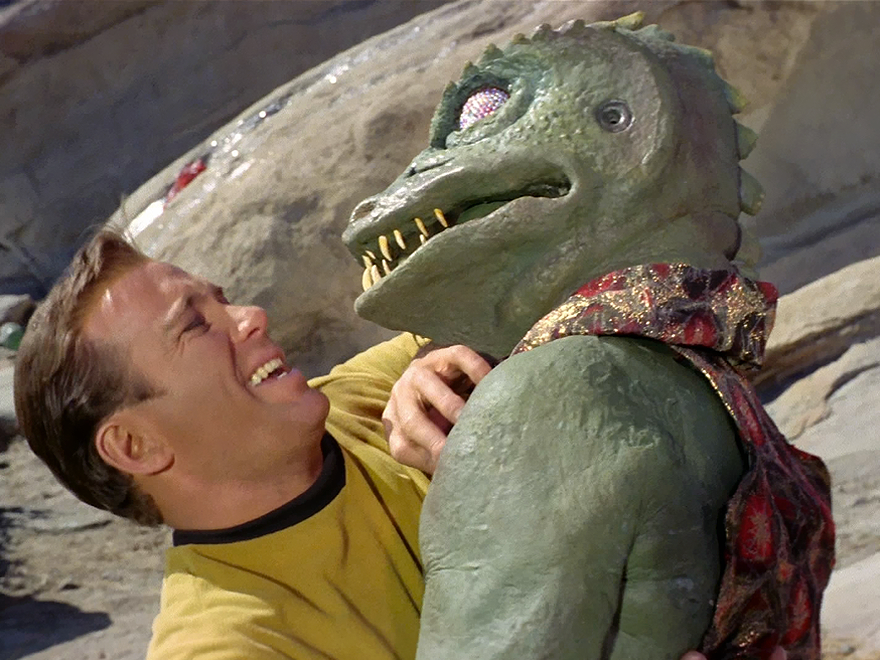 Brown was a prolific writer, but of the various credits I came across, the one that stood out most was a short story titled “Arena,” from Astounding Science Fiction, June 1944. It was used as the basis for the famous Star Trek episode with the same title. In the episode, Kirk is isolated on a planet with an alien Gorn he must battle using only the resources at hand. So he creates a crude projectile weapon. (See more details on the creation of the episode here.)

“Origins of Galactic Medicine” by Edward Wellen — Wellen contributes another series of science fiction anecdotes intended to be humorous. Unfortunately, this latest batch wasn’t as entertaining as some of his past contributions.

The Caves of Steel, Part 3 by Isaac Asimov — This is it! The conclusion to the serialized novel resolves the outstanding mysteries and leaves room for a sequel. And honestly, I didn’t know if there was a sequel until I looked it up. The sequel is titled The Naked Sun and was published in 1957. In fact, there are a total of books with the same character, Elijah Bailey. The last two were published in 1983 and 1985 — quite a long span to wait between the second and third books.

Asimov’s Robot Novels. UK covers by Chris Foss. Note the mistitle on the third book
— the title should read ‘The Robots of Dawn’

But back to The Caves of Steel — I thought it was a good story with a believable setting and characters. There are some slower moments here and there, but I enjoyed it overall. I’m not sure it would do well as a movie, at least not as-is. But I think with some tweaks, it could become a pretty good sci-fi/action flick.

Matthew Wuertz’s last retro review for us was the November 1953 issue of Galaxy.

Brown is one of the great neglected SF writers, and his mystery novels are just as good as his science fiction. NESFA collected all of his SF – novels and short stories – in two volumes, and you’ll never make a better purchase.

Thanks for the info and recommendation, Thomas!

That cover is about one step away from being worthy of MAD magazine.

Major Wootton, I love it!