Over at his website Strange at Ecbatan, Rich Horton takes a look at a long forgotten Ace Double from 1968. So forgotten, in fact, that I’ve never even heard of it. I dug through the dusty pile of Ace Doubles by my bed but, nope, it ain’t in there.

Assuming Rich didn’t just make this book up, it looks like a fascinating artifact, although maybe not for the usual reasons. Here’s Rich on the first half:

The lure for me in this Ace Double is the first novel by John M. Faucette, a fairly little known writer these days, but one of a very small set of African American SF writers before, really, the 1980s, which is amazing and a bit embarrassing for the field… I approached Crown of Infinity, Faucette’s first published novel, with interest and a real desire to like it. The publisher’s copy compares it to Doc Smith and Olaf Stapledon, and, oddly enough, that comparison makes a lot of sense. Unfortunately, the comparison ultimately is utterly to the disadvantage of Crown of Infinity. Indeed, I’d say this book reads as if written by a teenager completely in love with Doc Smith’s work … and with enough talent to imitate aspects of it effectively, but with no ability to structure a novel, nor enough originality to really make the novel “new.”

Here’s the inside cover, with the full description. 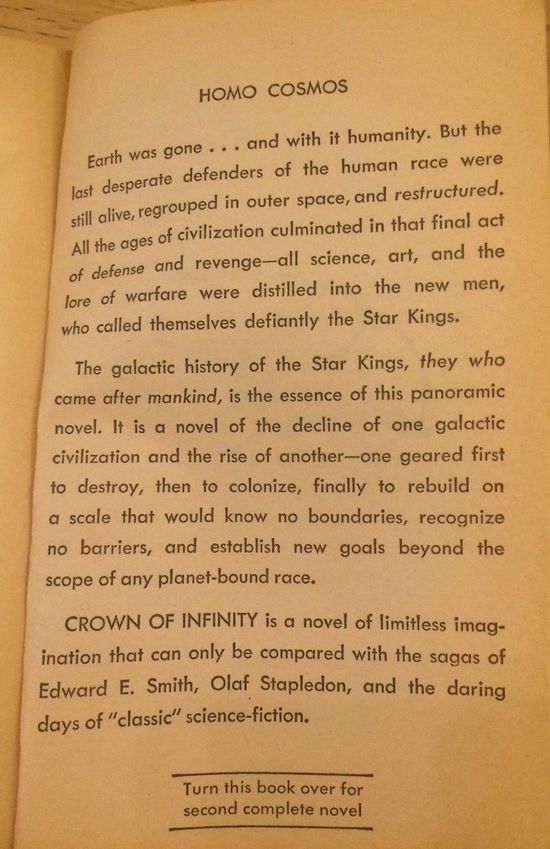 Over at The A.V. Club, Keith Phipps read his way through a box of 75 Ace Doubles a few years ago, and this one was among them. Here’s his take on Crown of Infinity (with a little help from Black Gate writer Steven H Silver).

The hapless, deathless Star Kings are forever in the process of being wiped out of the galaxy, then coming back, usually helped with the latter by some vague piece of technology that Faucette doesn’t describe very well. Think I’m kidding? Here’s the last line of the fifth chapter: “No longer did the Star Kings exist.” Last line of chapter 10: “Star Kings forever!” It owes a deep debt to E.E. “Doc” Smith’s Lensmen series…

The story behind Crown Of Infinity, the best I could piece it together, is more interesting than the book itself. This is Faucette’s 2003 obit from SFsite.com:

Author John M. Faucette, Jr. (b. 1943) died of an heart attack in late January. Faucette published four novels in the 1960s, but wrote several more novels which he was unable to sell. He believed that part of the problem was that his protagonists were black. His only short story appeared in 2001.

Phipps does a nice bit of research on Faucette that sheds some light on the issues he grappled with.

I found a 2001 essay apparently written to introduce a self-published book called Black Science Fiction, wherein Faucette explains where he came from:

…In the sixth grade I wrote a story about spaceships battling for the moon and the teacher announced to our class that Emmett Till had been lynched.

I have never forgotten either.

I did not realize it then, but those two things would bring into being a black science fiction writer. As I grew up, there were two things there was no question of: I loved science fiction, read it every chance I got — to the exclusion of everything else, and I lived in a hostile racist world.

In the end, Rich’s assessment of the novel is pretty blunt.

Ultimately, Faucette’s imagination fails him. The scope is Stapledonian, and some of the ideas recall Doc Smith. But nothing convinces. And the scope — for all its vastness — never seems plausible or thematically interesting. The ideas — the aliens, the weapons, the battles — only come off as faint echoes of Doc Smith. And the novel’s structure is, well, all but nonexistent, with lots of repetition, and with several chapters seemingly just shoehorned in, maybe simply to pad the wordcount. 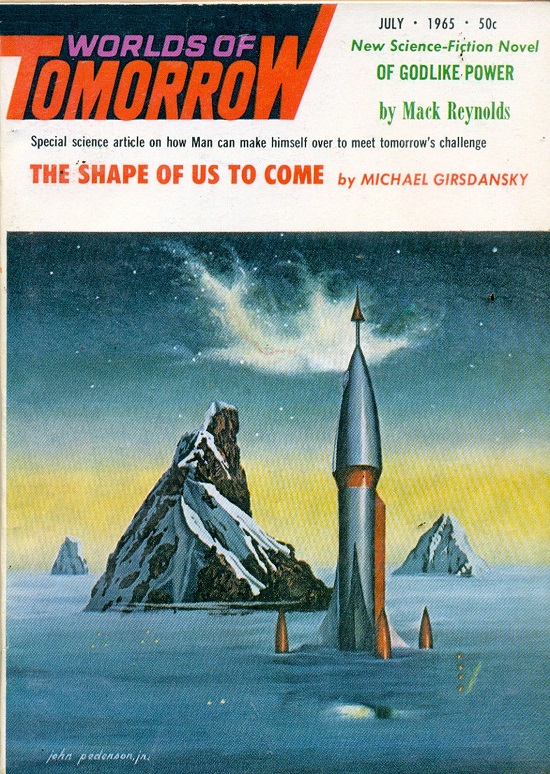 Worlds of Tomorrow, July 1965, containing
“Worlds of the Spectrum” by Emil Petaja

The Prism is… expanded from a 1965 Worlds of Tomorrow story called “Worlds of the Spectrum.” It opens with a stereotypical hero character, Kor, fighting battles with the various inimical species in his environment, and desperately wishing to reach the beautiful Princess Sena in her castle up on an unscalable cliff. We soon realize that Sena is in fact a spoiled young woman in a futuristic world who, along with others of her privileged Gold class, entertains herself with “livideo,” a sort of virtual immersion in the lives of Kor and his fellows.

It soon turns out that Sena is really not quite so bad as it first appears. She’s one of a small group who is trying to overturn the classist and unjust future society on Earth, which exploits not just the other “colors” on Earth, but the genetically created creatures, many of them human, on the planet inhabited by Kor. She ends up arranging for Kor, and eventually a number of his fellows, to be teleported to Earth to confront the evil ruler, His Goldness IX. Meantime she must both entice and fend off the advances of the ugly and fat Dorff, His Goldness’ chief aide; while trying to convincingly fit into her milieu, obsessed with virtual entertainment and sex and drugs.

The reasonably clever but clunkily executed novel The Prism… is a novel about young folks upsetting the established order and sticking it to The Man. (Actually — spoiler — a genetic monstrosity who never dies, and grows his children on his body.) The tools of the revolution: deception and swordsmen.

Let me explain: The Prism’s cover and its opening chapter don’t really represent the contents found therein. Kor, the loincloth-clad fantasy hero fighting the vampire on the cover? He’s in the book. But as we quickly learn, he’s the unwitting star of a “livideo” program watched by citizens seeking “titill.” He thinks he lives in a kingdom called Vicaria, though if he had a grasp of Latin, he’d recognize himself as a dupe.

Here’s the inside cover. 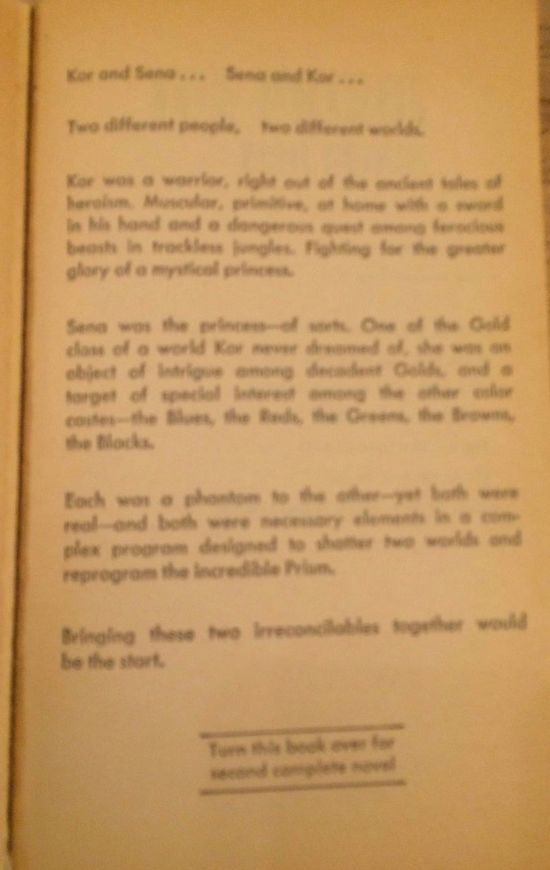 Crown of Infinity/The Prism was published by Ace Books in January 1968. It is 126 + 129 pages, priced at 60 cents. Neither novel has ever been reprinted. The covers are by by Kelly Freas and Jack Gaughan.

I’ve got this one too, John, and I have to say Rich’s comments on both are pretty spot on. I wanted to like the Faucette book because I didn’t know the author, and an internet check revealed his being African American, which, as Rich says, was rare for the time. I recall little about the novel, other than the fact that the writing wasn’t the best. Petaja’s was a bit better; I’ve read almost a dozen of his novels, and he tends to work with material from Finnish mythology. Go to Wikipedia for some rather surprising information about his background, including being a member of First Fandom, and corresponding w/ Lovecraft. His novels are competent, but I can’t say they stand out.

I do love both of those covers, at least, particularly the Faucette.

The Faucette cover looks like Kelly Freas’s work, and the Petaja like Jack Gaughan’s. Hard to dislike Freas, but Gaughan’s done better.

Ahh– I just now saw John’s line about the artists! Sorry, John — you can drop my 2nd comment!