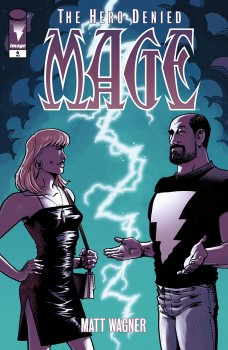 So I picked up issue 7 of Mage this week and realized that I’d never gotten around to reviewing issue 6, so expect another review to follow this one very soon.

Issue 5 ended with Kevin and Joe spotting the Questing Beast. Upon seeing the pair, the Beast takes off. Kevin tells Joe that he’s got to follow it. Kevin thinks that the Questing Beast could show him the way to the Fisher King. Joe’s response is that he’s out of this whole hero/quest thing and then leaving.

When Kevin gets home, he finds Magda waiting up for him. What follows is an argument that touches on some things that I’ve been going on about in earlier reviews. We learn that Kevin hasn’t had a regular job since he was twenty-two years old and that he’s been relying on that magic debit card for most of his adulthood. No idea how that sort of thing generates enough money for them to afford houses without anyone asking where the money comes from … unless everyone just assumes that Kevin is a drug dealer. The fact that Kevin hasn’t really used his powers to help anyone in this volume of the series, only fending off monsters that have come looking for him, makes Magda seem less like a killjoy and more like a wise friend offering good advice. On top of that, we’ve seen that Joe’s given up adventuring with no ill effects, while Kirby’s dedication to adventuring eventually got him killed.

Meanwhile, the Umbra Sprite is testing the city’s resident handicapped population to see if any of them are the Fisher King in disguise. Of course, the “test” involves opening a handbag full of flying piranhas on them. Anyone whom the flying piranhas (OK, she calls them Sluagh Sidhe) DON’T eat is the Fisher King. Needless to say, this ends with a lot of bone piles and no Fisher King. While the plan of setting up shelters in order to look for the Fisher King makes sense, we understand as readers that he likely won’t be found in such a conventional, undramatic fashion, so these interludes are mostly excuses to show the various grisly acts that the Umbra Sprite and her Gracklethorns are willing to commit.

Next up, we have Magda heading off to work (still not sure what exactly she does for money) and reminding Kevin about a charity auction that they’re supposed to attend at their children’s school. One page later, Kevin is visiting … honestly, it’s a head shop. It’s a head shop for magicians where folks can buy “magic” drugs. Think I’m reading too much into it? Well, Kevin goes there to pick up some “magic” eye drops. So, symbolically, Kevin is told by his wife that he’ll have to make himself look presentable for a public event and the first thing he does is pick up some eye drops … infer what you want. Also, after Kevin buys the magic eye drops, the shopkeeper rolls a joint and offers it to him.

Not all of the symbolism is subtle.

Of course, it turns out that the eye drops are actually intended to help Kevin find the trail of the Questing Beast. So while he’s supposed to be at home, changing into something that isn’t a lightning bolt T-shirt, Kevin opts instead to go off chasing another supernatural beast. Despite knowing why he needs to keep a low profile. Meanwhile, Magda’s at the school, answering questions about her absent husband while getting hit on by the superintendent.

No fighting this issue and not much in the way of plot advancement, but I did appreciate that the story is addressing the fact that Kevin has no apparent job and doesn’t seem to really do anything besides frequently wander off to fight monsters. It’s a nice inversion of the first series, where Kevin was so reluctant to abandon the mundane world to fight evil and now there’s simply nothing in the mundane world that can hold his interest. Far from being a one-dimensional shrew, Magda continues to demonstrate that one can balance magic and mundanity. Some people would call it a work/life balance, while artists might see it as a metaphor for being a professional artist, as opposed to just “doing your own thing” and expecting someone else to pay your bills (in Kevin’s case, his wife and a magic credit card).

Mage #6 is available in print at all decent comic shops, as are back issues to volumes one and two of the series. If you prefer getting your comics digitally, then check out Mage: The Hero Discovered, Mage: The Hero Defined, and all the latest issues of Mage: The Hero Denied at Comixology.