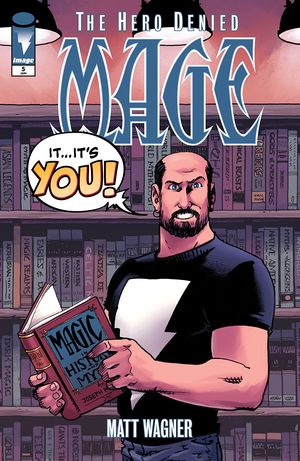 Yeah, Kevin, it’s me. There was a two-month break between issues 4 and 5, but it wasn’t due to any sort of publishing mishap. Rather, Matt Wagner built these month-gaps into the series schedule from the beginning in order to give himself enough time to finish everything without any unexpected delays. He takes advantage of this gap by jumping the story ahead by thirteen months. Obviously, spoilers and fan theories ahead.

It opens with a five-page flashback set some time shortly after the end of the first series (Hero Discovered). Kevin Matchstick is tromping through a sewer with a full head of hair; a magic baseball bat; and the first World Mage, Mirth. We get hints of things to come (high top shoes, four star hotels, the departure of Mirth) and a nice splash page of an Ellen Trechend.

We then flash to the present. Kevin is trying to explain to his son that his life is filled with tragedy and serious mythic underpinnings. But Hugo just wants to hear stories about his dad fighting monsters. Meanwhile, Kevin’s wife is apparently a realtor now (even though she was a teacher four issues ago), looking pretty sharp in her red business suit. They also own a purple cat named Chloe. And they’re staying in a house that they can afford because … I seriously don’t know.

We’re on issue #5 and I still have no idea what Kevin Matchstick is supposed to have been doing for the last ten years. Has he seriously just been living off a magic ATM card while he’s been avoiding fighting monsters?

Anyway, he’s walking Hugo to a school bus, asking if he likes the neighborhood, then takes a detour to an ATM to grab some money and bitch at the absent mage. And it looks like he’s been lying low since his battle with the hell-queen last issue. Which means, I guess, that he left his family to protect them, fought a monster, figured out that abandoning his family in times of trouble was dumb, then returned home.

Meanwhile, the Umbra-Sprite emerges from black hell water after a thirteen-month slumber, apparently having really gotten knocked out after summoning Ereshkigal two issues ago. Apparently, the bad guys have no idea if Kevin is even alive or dead at this point, but their plan to set up a giant rescue mission to lure all of the city’s handicapped people (including, they hope, the Fisher King) is underway. There’s a really neat red blanket trick and she triples the bounty on Kevin, but otherwise it’s just an updating of what’s happened between issues.

That’s when we go to Kevin in a bookstore, looking up books on mythology, when Joe Phat zips in and says hello. Due to a weird art choice, Joe actually looks as if he’s waving hello to the reader instead of Kevin. They go out for pizza and we’re finally told that this issue takes place ten years after the wrap-up of Hero Defined. Which would mean that issue one of this series took place nine years after Hero Defined. And since that issue wrapped up in 1999, this series appears to be set around 2008/2009. Not a huge time shift, but it does account for some weird discrepancies.

And then Joe drops the bomb … Kirby Hero has died between volumes. It’s a bit of reality that hits home for too many of us. As we get older, our circles of friends start to spread out. If we don’t move to another city, then many of our friends do. And sometimes it’s a month, a year, or even several years of losing contact with someone before you hear secondhand that they died. Again, the fact that this series is set in an era before Facebook, Twitter, and all of the social media that makes it so easy to keep up to date about acquaintances is probably intentional.

So Kevin and Joe are talking about the nature of the adventurer’s life when they come across a Questing Beast digging through garbage. Taking a look at the thing, I would have guessed, “Pimp Lizard,” but sure, Questing Beast.

I know that I griped a little about issue 4 just being a big fight scene that did nothing to advance the plot. This issue, there’s no fighting at all, and plenty of characters moving around, finding their places for the big finale that is only ten issues away. Again, a lot of fans might find this series to be too slow-moving at points, but at its best it balances those grounded human moments with mythic themes. Matt Wagner has described the three volumes as a sort of mythologized autobiography and I think that’s why it resonates with so many of us.

Also, Matt Wagner seems to be fixated on red being a power color for women, as Magda and the Umbra Sprite are both wearing red business suits while hatching their respective schemes. Of course, the Umbra Sprite wore a red suit back when he was a man in volume one.

And I don’t think I have a full-on fan theory about the third mage or the Fisher King yet, but there are visual clues that seem significant. The fact that the Umbra Sprite is a woman this time and that Magda is wearing clothes almost identical to hers makes me think that the two characters are mirroring one another. Not sure if this means that Magda herself is the third mage, although it would be a great “hiding in plain sight” revelation. She is, after all, a powerful magician in her own right and her magic is focused on knowledge and defense, just like Mirth’s and Wally’s.

And speaking of Wally, he was always wearing a purple hat in the second volume and we learned at the end of that series that the hat had belonged to Edsel. And while Magda doesn’t wear a hat, they do have a purple cat. Is the hat the cat?

I’ll be back next month with another Mage review. And if you’re starved for more Mage commentary, check out Mage: The Hero Described. It’s got articles and a podcast and just goes far deeper into this stuff than I do.

Mage #5 is available in print at all decent comic shops, as are back issues to volumes one and two of the series. If you prefer getting your comics digitally, then check out Mage: The Hero Discovered, Mage: The Hero Defined, and all the latest issues of Mage: The Hero Denied at Comixology.