But it’s perfectly okay to not know where to start. Despite celebrating its 100th birthday last year, Sword & Planet is not as popular as its sister genres (Sword & Sorcery, Sword & Six-Gun, Sword and Sandal, Sword & Sextant, Sword & Slupree….). And that’s okay, we love it just the same. But what is Sword & Planet? Matt Staggs does a fine job recapping the rich history of this venerable sub-genre at Unbound Worlds.

Mash together fantasy’s sword-swinging heroes, and the far-out alien civilizations of early science-fiction, and you’ve got Sword and Planet fiction. Arguably the brainchild of Tarzan creator Edgar Rice Burroughs, Sword and Planet tales usually features human protagonists adventuring on a planet teeming with life, intelligent or otherwise. Science takes a backseat to romance and derring-do… Where Sword and Planet can really be seen today is in the influence it has had on popular culture. The lightsabers, blasters, and planet-hopping heroics of Star Wars probably wouldn’t exist were it not for Sword and Planet. Neither would Avatar or Stargate. 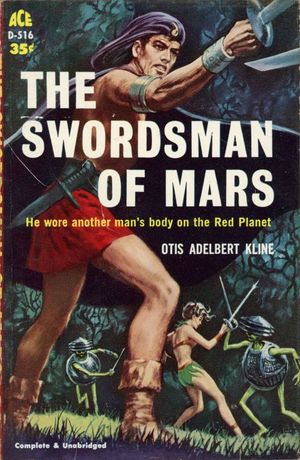 You can probably date the birth of the Sword & Planet genre to the release of A Princess of Mars by Edgar Rice Burroughs, 101 years ago.

Before there was Tarzan, there was John Carter: a renegade Civil War veteran mysteriously transported to Mars: home to a dying civilization locked in eternal conflict with enemy barbarian tribes. There, among a people entirely unlike any he has ever met, Carter will find everything he ever wanted: adventure, riches, and love.

Perhaps the greatest practitioner of Sword & Planet in the later half of the 20th Century was the great Jack Vance.

Jack Vance is, of course, famous for his Dying Earth stories — and deservedly so. However, he wrote a lot of other things, among them Planet of Adventure: a cycle of four novels chronicling the adventures of Adam Reith: a space traveler stranded on Tschai: a savage alien planet home to slavers, murderers, and monsters.

Although the great classics of the genre data back to the pulp era, there are still fine examples being produced today (and not just in Hollywood, with films like Guardians of the Galaxy). Gardner Dozois and George R.R. Martin recently celebrated Sword & Planet with their twin anthologies Old Venus and Old Mars.

In this follow-up to Old Mars, a collection of award-winning authors tell tales of the Venus of yesterday: a steamy, jungle planet teeming with dangerous alien life. Contributors include, Gwyneth Jones, Elizabeth Bear, Joe Haldeman, and others.

There are other recent examples from the small press, including Jeff Doten’s Strange Worlds, and Christopher Paul Carey’s Swords Against the Moon Men.

Charles Saunders, James Enge, Ryan Harvey, and Rich Horton have all written extensively about Sword & Planet at Black Gate. Here are a few examples from our archives. 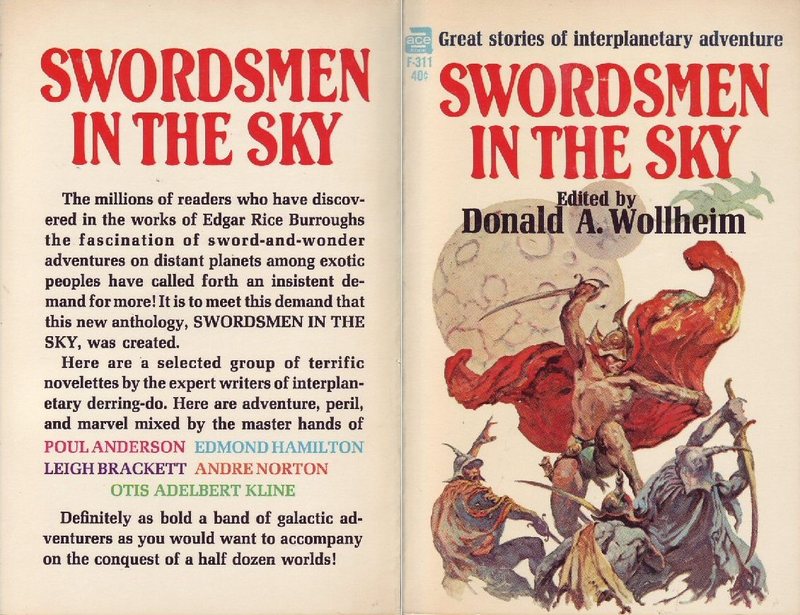 Swordsmen in the Sky (Ace, 1964) cover by Frazetta

Swordsmen in the Sky, edited by Donald A. Wollheim, by Charles Saunders
A Bout of Aboutness: Urban Fantasy and Sword-and-Planet, by James Enge
Sword Against Slug: Robert E. Howard’s Almuric, by James Enge
Read Planet: Kline’s The Swordsman of Mars, by James Enge
Almuric – Howardian Sword & Planet, by Tom Doolan
From Ancient Opar to the Moon: An Interview with Author Christopher Paul Carey by Jess Terrell
Masterpiece: The Sword of Rhiannon by Leigh Brackett, by Ryan Harvey
Edgar Rice Burroughs’s Mars, Part 1: A Princess of Mars, by Ryan Harvey
Ancient Planets and Treachery at Every Turn: Rich Horton on The Ginger Star by Leigh Brackett
The Radio Planet by Ralph Milne Farley
Planets of Adventure by Murray Leinster
Big Planet by Jack Vance

Still possibly my favorite genre. And I’m getting close to overdue on a Barsoom reread.

Now that I think about it, the only Sword & Planet I’ve read is A Princess of Mars.

Every time I go to read Almuric I read a comment saying how it’s far from his best work and I pick something else.

I’ll keep an eye out for the jack vance material. I have a 1968 edition of City of the Chasch. That one looks like sword and planet. How is it?

I’ve never seen that Fraser’s cover. I had to resist the urge to go find an eBay listing.

You can never go wrong with Vance, although it’s been a while since I read the books and I’m not sure exactly how sword & planet they are.

If you’ve only read A Princess of Mars, Glenn, you never got the Burroughsmobile out of the driveway. I love Princess, but it’s a little clunky (ERB’s first novel), but by the time he wrote the next two books to round out the initial John Carter trilogy (Gods and Warlord of Mars), he had it all figured out. I would vote for The Gods of Mars as his best book, even over Tarzan.

And by all means, read Almuric. It wasn’t Howard’s most natural mode, for sure, but that actually makes it pretty interesting, I think. It’s not white-heat Conan, but it’s not a bad book at all.