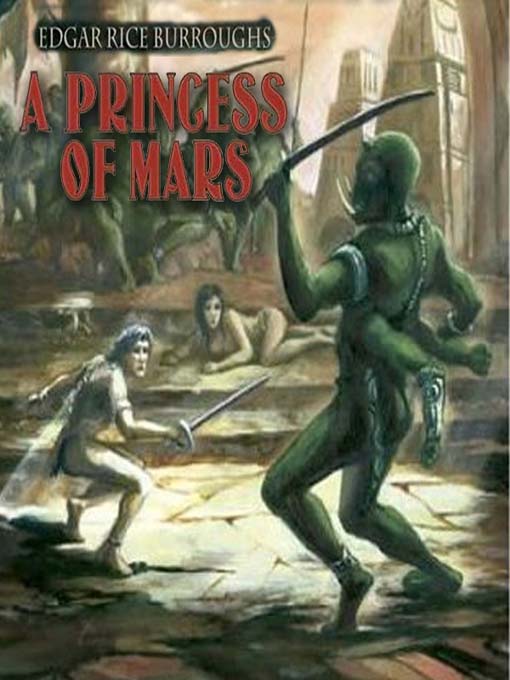 In the old days, when sheep were sheep and ewes were embraceable, genres tended to ossify pretty fast. But no genre-formula became so formulaic so fast as sword-and-planet. Burroughs set the pattern with A Princess of Mars: a lone American (not a Canadian–not a Ugandan–not a Lithuanian–an American) is mysteriously plunged into an exotic other world which is both more advanced and more primitive than the earth he knows. He conquers all by virtue of his heroism and marries the space princess. In the inevitable sequel the pitiless author will somehow compel him do it all again, sometimes under another name. This sounds like mere mockery, and of all subgenres sword-and-planet may be the most mockable (one has but to mention the magic syllable “Gor” to banish all useful thought), but when well-done it can be a blast. Burroughs’ Barsoom books are still being read, are still being filmed and name-checked in other media, and not because of his melodious prose style or his thoughts on the eternal verities; somehow the pattern he hit on (and partly appropriated) rang people’s bell, and continues to ring it. Figuring out why wouldn’t be a waste of anyone’s time, even if the books are not a matter of high seriousness. In this genre or subgenre, Almuric is of special interest, because it is by one of the greatest fantasists of the pulp era, Robert E. Howard. It’s also interesting as one of REH’s few booklength works and, it seems, his only experiment at building an entire secondary world. Although the story (like much of REH’s work) is now in the public domain and available online, I read the novel in Planet Stories’ new edition and I recommend that anyone really interested in the book do the same. I say this not because the publisher has paid me an enormous illicit bribe (although I will accept one if offered). The online texts are mostly poor transcriptions littered with many obvious proofreading slips (e.g. “forward” and “foreward” for “foreword”; “premediatated” for “premeditated”, etc.–and that’s on the first two screens of this one). In contrast, Planet’s text is clean and readable; there’s an interesting introduction by Joe Lansdale and a great cover in the Jeff Jones tradition by Andrew Hou.

With all that said, I have to add that I found Almuric somewhat disappointing. The world-building, candidly, is inept. The hero, Esau Cairn, finds himself in a culture that he persists in calling “barbarian.” These people live in a walled city with stone buildings; they have medicine, more advanced than Earth’s (so EC claims off-handedly), and poetry, and firearms. But they are barbarians, because the men are hairy and bellow a lot. Eh. The author does not seem to have conceived that a city of perhaps twenty thousand people would have needed some sort of social organization more complicated than a tribe of nomadic hunter-gatherers, and that even in such a tribe not every man would be a hunter-warrior. (Who collects the garbage? Who builds and maintains the buildings? Who are the doctors?) This may seem like nitpicking, but the first and worst part of the book is REH’s painstaking introduction to the world of Almuric where very little is happening except the hero’s first person account of these implausible people and their savage but strangely colorless world.

The choice of a first-person narrator might have been unwise, too; REH is obviously uncomfortable with it. At one point Cairn mentions how the heroine rains “passionate kisses on my bronzed features.” This would sound better in 3rd person (to anyone but George Hamilton, possibly). Also, after roughly 38,000 words of running on about how I did this…. I did that… my bronzed features, thank you very much etc., REH has Esau Cain remark bashfully, “I was never much of a talker.” Sheesh, Esau, maybe you were and you just didn’t realize it. The truth is that the narrator and the character are always two different persons, even if they are supposed to be the same, and it takes a certain skill to coordinate them. REH isn’t showing that skill here.

There are unpleasant overtones of the racism that often lurks at the back of REH’s stories, too: the monstrous villains of the world and the novel have black skins. They are not exactly 1930s media sterotypes of Africans (they have wings, they are represented as having a higher culture than the other inhabitants of Almuric), but I (rightly or wrongly) got the feeling that their sexual rapacity and their brutal cannibalism somehow went along with their skin color.

This is complicated somewhat by REH’s fondness for the adjective “black” in general; to him it was obviously heavy with emotion and dark meaning.

Far away on the horizon I saw a giant black bulk growing in the sky. […] It was a gigantic block of black basaltlike rock rising sheer out of the desert, a broad river flowing about its feet, its summit crowned with black towers, minarets and castles. … Yugga, the Black City, the stronghold of the winged people.

It was black, see. This monotonous incantatory use of language is not an accident on REH’s part; he clearly liked the sound of it–a line about the “citadel of Yugga, on the rock Yuthla, by the river of Yogh, in the land of Yagg” keeps recurring like the chorus of a song. But I guess I don’t like the sound of it; I think REH writes much better when he doesn’t work so hard at sounding highflown and epical.

There are things to like in this book. The chaotic fight-scenes at the end of the story are pretty well done. There are some interesting beast fights, including one against (I kid you not) unicorns. But these are not civilized, law-abiding unicorns; they’re more like the savage creature mentioned in the Bible. Speaking of Biblical allusions, the Biblical Esau is famously “a hairy man” but REH’s Esau Cairn is a smooth-skinned man among a people of apelike hairiness. I’m sure this means something, but I’m not sure what. And the book’s climactic scene is graced by an elephant-sized, betentacled, electric exploding slug, which alone makes up for any literary crimes REH commits, here or elsewhere.

Also, at times through the book, there are indications that REH himself is becoming impatient with his tiresome reverence for barbarism as a way of life. EC’s beloved–who is not the stereotypical space princess–tells him at one point, “To eat, drink and sleep is not all… The beasts do that.” EC mutters something about the futility of idealism, but he seems somewhat embarrassed by her observation, and at the end of the book EC says that “we hope to instill some of the culture of my native planet into this erstwhile savage people before we die.” If REH had lived, if he had let himself live, it would have been interesting to see what sort of writer and dreamer he matured into.

Another sword-and-planet book I read recently, and which I can recommend more strongly, is yet another offering from Planet Stories: Otis Adelbert Kline’s The Swordsman of Mars. But given how late I’m running, and how long I’ve run on, I think I’ll postpone that review until next week.

Nice post James. I didn’t know REH wrote any sword and planet. I’ll stick to my Conans for now, and his stories of the Crusades.

Wasn’t ALMURIC one of REH’s early works? It sounds like it doesn’t live up to his amazing KULL tales, or his legendary CONAN tales…

There are also some Clark Ashton Smith books available that frankly should NOT be…they are books that were written when he was like 14. “The Black Diamonds” is the one I tried to read a few years ago–they call them “juvenalia” which translates to “stuff that was written before the writer actually learned to write well.”

I don’t think ALMURIC is “juvenalia” but I thought I read somewhere that it was a very early creation…certainly sounds like it….

Thanks for the comments you guys!

I don’t think we know when REH wrote Almuric, but it wasn’t published until three years after his death. His agent–who (serendipity!) was Otis Adelbert Kline–obtained a copy and published it.

Some people have argued that OAK actually wrote Almuric but I find that hard to believe. The style and the concerns are REH through and through. It looks to me like an experiment that didn’t quite work out (whether it’s from early or late in his career).

But that exploding tentacled slug is pulp genius.

As much an old-school Conan fan as I am, I actually enjoy Robert E. Howard’s KULL tales better than anything else he wrote. I find them more lyrical, poetic, and Shakespearean than his Conan tales, and also more existential. These tales really flow, and reek of REH’s strong love of Shakespeare.

Many have pointed out that the writing style in the conclusion of Almuric is different from the rest of the work. My friend Morgan Holmes presented me with some convincing evidence on exactly who the author might have been, but since I’m not sure he’s taken the evidence public yet I’ll keep the lid on it.

In any case, it seems that Almuric might have reached OAK in an unfinished state, possibly a rough draft, if it was missing a concluding chapter or two. That might have a lot to do with some of the dissatisfaction you’re finding in the narrative.

It’s been too long since I read it — I can’t recall if the slug occurs in an REH chapter or in the part that’s under question.

I know various completers have been proposed for Almuric. OAK himself has been suggested as a candidate, but I don’t know if anybody believes that anymore. MH persuasively knocks the idea on the head here, proposing Otto Binder as an alternative.

But, although I risk drawing the wrath of MH upon me (and have already drawn the wrath of another REH fan whose name I won’t mention), I guess I’d want more evidence that there is a “second hand” here before I start asking whose it is.

I’d hate to deprive REH of credit for the slug, anyway.

Almuric is certainly better than some of the not so good Conan and Kull stories.

James is right that The Swordsman of Mars is better though.

[…] the old guys can be tricky sometimes. After I reviewed Robert E. Howard’s Almuric last week, I got some correspondence accusing me of being “politically correct” (that terrible […]

[…] of Mars is decidely within the narrow limits of sword-and-planet as established by ERB. As someone recently put it: “a lone American (not a Canadian—not a Ugandan—not a Lithuanian—an […]

“Sheesh, Esau, maybe you were and you just didn’t realize it.”
That comment made me laugh out loud.
Your criticisms of Almuric are, unfortunately, all too accurate. We should keep in mind, however, that as an unfinished draft at the time of his death, Howard never had the opportunity to bring it to the level of his better work.
In fact, I’d guess the line about civilizing the locals was not Howard’s. I’ll have to disagree with you though and say that the book would be better without it. Howard excelled at revealing the primitive, wild vitality of Man’s nature. I consider the final two paragraphs of the novel a watering down, if not a betrayal, of Howard’s beliefs.