Over at his personal blog Strange at Ecbatan, Rich Horton reviews one of the great classics of science fantasy, Leigh Brackett’s The Ginger Star, the opening novel in the three-volume Book of Skaith.

I adore the great Brackett stories of the late ’40s and early ‘50s, particularly The Sword of Rhiannon, one of the great pure planetary romances; and other stories in the same loosely developed future (though The Sword of Rhiannon is really set in the past): “The Halfling,” “The Dancing Girl of Ganymede,” “Mars Minus Bisha,” “Shannach – the Last,” for example. Other SF was also very fine, most notably The Long Tomorrow, a post-Apocalyptic novel; but also The Big Jump and The Starmen of Llyrdis. Her slightly later story from Venture, “The Queer Ones” (aka “The Other People”) is excellent, and not terribly well known. The Eric John Stark stories fit into her Mars/Venus/etc. future – and they are quite enjoyable as well. Stark is portrayed as a nearly savage man, raised as an orphan on Mercury, and rampaging through Venus and Mars in the most prominent pieces.

The Skaith novels feature Stark as the protagonist, but they are set on a planet in another Solar System, Skaith. I had assumed that she set them there because the Mars and Venus of the earlier stories was no longer astronomically plausible, and perhaps that is the case, but it should be noted that in these books she does still portray Stark as a native of Mercury – also a highly implausible thing.

The Ginger Star was originally published in two parts in Worlds of IF magazine, in the January/February and March/April issues in 1974.

Both covers were by Rick Sternbach.

The Ginger Star first appeared in paperback from Ballantine Books in May of the same year, with a very fine cover by Steranko (top, left). All three volumes in the series were re-issued five years later by Del Rey/Ballantine in 1979, with new covers by Boris Vallejo (top, middle). They were reissued again as part of Erik Mona’s excellent Planet Stories line of adventure fantasy novels in 2008, with new covers by Andrew Hou (top right).

It’s the Steranko covers that are generally considered definitive by Stark fans. Steranko did the covers for all three books in their initial release. Here’s the inside cover copy for The Ginger Star, and the covers for the next two. Note the varying title designs. 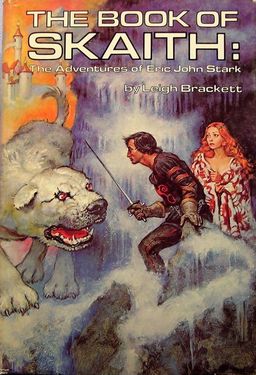 All three novels were eventually collected in The Book of Skaith by the Science Fiction Book Club in August 1976, with a colorful cover by Don Maitz (right).

Eric John Stark comes to Skaith as a somewhat unofficial representative of the Galactic Union. His mission is mostly personal: his mentor, sort of adopted father, Simon Ashton, has disappeared from the chief city of Skaith, and foul play is suspected. Skaith, an ancient planet turning colder as its Sun dies, is ruled by a shadowy group called the Lords Protector, via the Wandsmen, who control most of the city states, largely by a sort of bread and circuses policy whereby the shiftless “Farers,” or it might be, “welfare cheats,” leech off the productive citizens. Stark more or less randomly begins to look for Ashton, and finds hints that he may be in the harsh North, perhaps at the mysterious Citadel of the Lords Protector. He makes an enemy of the local Wandsman, and then heads to Irnan, another city where a faction is trying to get passage via the Galactics to another planet, to escape the rule of the Lords Protector. There he assists in the beginning of a rebellion, and finds himself declared the subject of a prophecy, that a “Dark Man” would come to bring people to freedom. That the prophecy is delivered by Gerrith, a beautiful and tough Wise Woman, who insists on accompanying him in his journey to the North, is only a bonus.

Stark continues north, meeting with treachery at almost every turn, and with further prophecies. But it is clearer and clearer that he is coming closer to Ashton, and to the Lords Protector, whom he (somewhat reluctantly) sees as his responsibility to unseat. And, too, the only way out seems to be through… There’s a lot to like here. The various different peoples, all varieties of human, some more mutated than others, are pretty cool…

(A note on my edition, shown above [top, middle]– this is the second edition, from 1979, with a Boris Vallejo cover. The original cover from 1974 is by Jim Steranko, and to my mind it is much better, with a depiction of Stark much closer to my image of him.)

Here’s the back covers for all three books.

We previously covered Leigh Brackett in these articles:

Haffner Press is putting finishing touches on one of their gorgeous hardcovers; if I’m not mistaken, it’ll also contain materials from a fourth, never completed, Stark novel.

And the three Stark novels (as well as most or all of her other planetary romance stories) are available in eBook format from the Baen electronic library.

(oops; to clarify, the Haffner Press hardcover will have all three of the Skaith novels plus the materials for the unreleased one)

I really wanted to like these books. In the first book, Brackett paints Eric John Stark as the proverbial superman, full of primal strength and animal cunning. Then, just as you’re gearing up for a rip roaring adventure, Stark gets captured and tied up. Then he gets captured and tied up again, and again. Finally, when you’re at the end, hyped up and ready to see our hero unleash all his pent up primal fury against the forces of evil, he doesn’t…. really do anything.

John Stark is the most impotent Super Manly Man I’ve ever seen, and I honestly think Brackett did it on purpose. She takes our expectations and favored tropes and turns them against us, making our superman into a damsel in distress for most of the book. That was mean Ms. Brackett. 🙁

I never did get around to reading the other two books.

CMR: you should look up the earlier Stark stories, from the late ’40s and early ’50s.

I had the Vallejo covers, and happily gave them away once Paizo reprinted with those marvelous Hou covers. The cooky Maitz hardbacks are things I keep finding for a buck and giving away to students and friends who have never heard of Brackett.

I was somewhat disappointed in the SoR after the Stark stories, but it was okay.