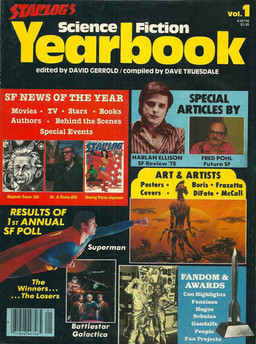 Last week, as part of my ongoing look at Lester Del Rey’s Best of… paperbacks from the 1970s, I wrote a brief piece on The Best of Robert Bloch. In the Comments section, Tangent editor and uber-fan Dave Truesdale offered up this fascinating tidbit:

Back in 1978 David Gerrold and I edited the Starlog SF Yearbook… For the section titled In Memoriam I wrote Robert Bloch and asked if he would do the honors (Kerry O’Quinn, Starlog publisher had given me a budget and so I was of course paying authors). Bob agreed and turned in well over a thousand words on three people who had passed away in 1978: J. Francis “Mick” McComas, co-founder of F&SF; Eric Frank Russell, and Leigh Brackett. It was a marvelous piece, bookended with how the field had begun so small when everybody knew everybody else and it was a big deal when someone died — and today (1978) when hardly anyone noted the passing of folks like Hugo Gernsback or Raymond Palmer…

After Bob got the check for his piece, he wrote back to express his thanks and that Mrs. Bloch would no doubt enjoy spending it on several bags of groceries.

After thinking on it a bit more, Dave got in touch with Robert Bloch’s daughter, Sally (Bloch) Francy, to ask for permission to reprint the piece. Here’s part of her reply:

I’m sure Dad would be very pleased, and I hope he and Rich Matheson are chatting about it as I ‘speak.’ I babysat for Matheson’s kids and rode horseback with their oldest daughter, Tina… Rich’s passing, though not a surprise, given his age and health issues, was still a shock. He and Harlan Ellison are the two people I knew from when I was a teenager, and to whom I still feel strong emotional ties to my father. They are the last of his generation of the people I knew. I miss my dad every day, still!

Thanks to Dave’s efforts, the complete text of her letter and her father’s 1978 piece are reprinted on the Tangent Online website.

John, a great post, and thanks for the link to the reprint and letter. Hits home a little as I’m currently re-reading some Lovecraft, and Bloch wrote the forward for the collection.

Also wanted to add to the list of those to remember … though he was mostly known as a fantasy author, Andrew J. Offutt also passed away a few months ago.

And you’re right — Andy Offutt certainly should have been included on that list. Also Gerry Anderson, Basil Copper, and Roger Ebert… all from 2013.