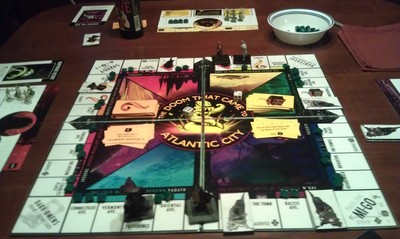 Reports are coming in that Erik Chevalier, the man behind one of the most high-profile Kickstarter game successes of 2012, The Doom That Came To Atlantic City, has admitted that he will never produce the game.

The Doom That Came To Atlantic City, created by Eberron designer Keith Baker and artist Lee Moyer, was a Monopoly-style game with a distinct Cthulhu flair. Described as “A light hearted Lovecraftian game of urban destruction,” the game invited players to take the roles of Great Old Ones in a race to be the first to destroy the world. The Kickstarter campaign launched May 7, 2012 with a $35,000 goal; by the time it closed on June 6, 2012 it had raised an astounding $122,874.

However, over the past 13 months, Chevalier has been releasing increasingly bleak progress reports, culminating in this post Tuesday:

This is not an easy update to write. The short version: The project is over, the game is canceled…

From the beginning the intention was to launch a new board game company with the Kickstarted funds, with The Doom that Came to Atlantic City as only our first of hopefully many projects… Since then rifts have formed and every error compounded the growing frustration, causing only more issues. After paying to form the company, for the miniature statues, moving back to Portland, getting software licenses and hiring artists to do things like rule book design and art conforming the money was approaching a point of no return. We had to print at that point or never. Unfortunately that wasn’t in the cards…

Predictably, the feedback from backers has been scathing.

In the comments section of Chevalier’s post RevBob wrote:

We’ve been given false information for several months, when the game was supposedly at the printer and production was ready to start Any Day Now. According to the update above, none of that was ever true; the game never even got to layout/prototype… I didn’t back this under the impression that the project was to form a company and then publish a game. I was led to believe that the company already existed, the game was ready, and they just needed to raise funds to print the initial run. I certainly didn’t expect to be paying someone’s moving expenses!

Critics have been pointing out the risks of Kickstarter for some time, especially for gaming companies.

Scott Taylor’s BG article “The Joy and Pain of Kickstarter [and How Backed Projects Still Fail]” examined some of the highest-profile Kickstarted games yet to materialize, and Joseph Bloch at Greyhawk Grognard recently produced his own “Kickstarter Update: Just the No-shows” list, with no less than 18 major MIA projects.

Scott also took a grim look at the poor business planning behind several recent Kickstarted games last month in his article “Kickstarter, it Really Shouldn’t be About the Stuff We All Get.”

The Doom that Came to Atlantic City had 1,246 backers, the majority of whom are unlikely to see any of their money back. As Glen Tickle at Geekosystem writes (in an article sub-titled “In his house at R’lyeh, dead Cthulhu waits with all of your money. Good luck getting that back”):

Chevalier hints at the reasons for the cancellation, and promises a future update with the specifics. He also states his intention to refund all backers, but since he quit his job to launch the game company that would have published The Doom Blah Blah Blah, he currently has no way of doing that.

Given the lengthy (and growing) list of unrealized projects, it seems unlikely The Doom that Came to Atlantic City will be the last high-profile Kickstarter game failure.

It’s too soon to know if this will choke off the money supply for future Kickstarter gaming projects. Most likely, Kickstarter backers will simply become more picky with the projects they back, looking for a track record of success before plunking down their hard-earned money.

And another one bites the dust… I will say this, however, in a recent correspondence with Kickstarter there was an indication that the platform was beginning to disallow the ‘stacking’ of non-fulfilled KS projects from designers, although a proven track record should circumvent that, but whatever the case, it wouldn’t have helped a game like this one that was a first timer thing.

Ultimately, I think, Kickstarter will evolve into something that funds almost exclusively those with a proven track record. In the same way that I won’t buy from an eBay seller who has zero feedback.

Uh… what does that mean? That Kickstarter will not allow sucessive campaigns from unsuccessful people? Or that you have to deliver Project 1 before you can Kickstart Project 2? Or neither?

I’d like to point out the most disturbing element of the cancellation and one that means that I will likely not back a project by this individual ever:

“I’ll create a separate bank account to place anything beyond my basic costs of living. Every time that account has a decent amount saved into it I’ll issue a payout to a portion of the backer list. I’ll post updates with each payout to keep you all informed on the progress.”

It looks to me like the project offered more rewards than could be afforded by the funds raised and didn’t do a break even analysis. Ugh.

Also his “I see Kickstarter backers, myself included, as pre-order customers and not investors in a corporation” statement is absurd. KS isn’t merely a pre-order service because he could have asked people to support him making the game while only offering T-Shirts as the reward and selling through distribution. Heck, he could have offered backers access to a live stream of his favorite Cthulhu related songs – similar to one of Zach Braff’s rewards. The reward need not be the end result of the KS. Kickstarter is a crowdfunding resource, not a pre-order catalog.

It is against KS ToS to sell corporate shares because prior to a month ago the SEC had no means of allowing the sale of shares through publicly advertised services. It would have been illegal for KS to allow this prior to the JOBS act, and it would have been difficult without SEC guidelines.

It is clear that this individual had no real idea what it would take to complete the project, and has no clear idea of the concept of contract either.

I don’t think this will ruin Kickstarter, but it does demonstrate how there is risk in any investment. And Kickstarter is an investment platform.

And you’re right — I don’t think this (and other failures like it) will ruin Kickstarter, by any means.

But I do believe we’re seeing the end of the Gold Rush phase of Kickstarter’s history. There are likely to be more failed campaigns in future, as backers get much more selective and demanding. Most backers, I suspect, will only allow themselves to be burned once.

John: Yes, this means you must deliver Project 1 in full before you are allowed to run Project 2. This was not the case in 2012, and not even the case in 2013 until this month.

OK, guess that’s some money that I’ll never see again. On the other hand, I did get my Shadowrun computer game yesterday, and Wasteland and Torment still seem to be chugging along.

Hope Baker doesn’t suffer too much blowback — Eberron was an interesting D&D setting, and he also designed Gloom, a delightfully creepy card game I highly recommend.

I currently have 7 outstanding KS projects that I am awaiting delivery one, not all of them are games, so it does not just affect them.

It has impacted the number of projects I back as well, as I used to back a couple a month, to now, I back once in awhile.

I originally looked at this game and then decided I didn’t need a copy of Cthulhuopoly. If I had backed it, I would not have got it anyway so…

Thanks for the clarification. That’s a necessary change to make Kickstarter a safer place for backers, I think.

>Hope Baker doesn’t suffer too much blowback — Eberron was an interesting D&D setting, and he also designed Gloom,
> a delightfully creepy card game I highly recommend.

Ditto. 98% of the vitriol I’ve seen over this has been directed Chevalier’s way, however. Most backers who are speaking up seem to be aware that Baker is relatively blameless here.

> I currently have 7 outstanding KS projects that I am awaiting delivery one, not all of them are games, so it does not just affect them.

Out of 28 that have not made it to their projected release dates.

I have backed 71 projects, 5 of which have failed. This means that 38 projects have delivered, most late, the lone exception has been Greater Than Games, who delivered both projects on time.

[…] has been mentioned here once or twice, Kickstarter is the world’s largest crowdfunding platform. The company’s mission […]

[…] raised an astounding $122,874 on a $35,000 goal, and who managed to spend virtually all the money without producing a single copy of the game. But I don’t think I’ve ever read an example as egregious as John […]

[…] I can’t recall a single instance of a Kickstarter creator being sued for non-delivery of a project, but some in the industry have been forecasting this for months — particularly in the face of recent high-profile Kickstarter failures such as John Campbell’s notorious Sad Pictures for Children and Erik Chevalier’s The Doom That Came To Atlantic City. […]