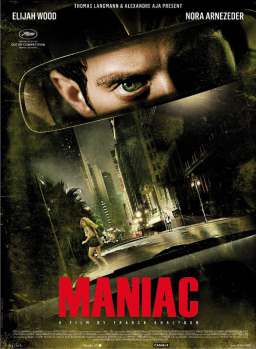 Anyone who saw Sin City knows that Elijah Wood can be one creepy dude.

Forget the lovable, hairy-footed Fodo Baggins. As easily as Woods can tear up and give good old Sam Gamgee a hug, he can drop into the role of a glassy-eyed, sociopathic killer with disturbing believability.

Believe me. Because apparently, Wood has his craft so finely tuned that he has managed to skeeve out an entire country.

The ruling also means the movie can’t be distributed on DVD at a later date.

A remake of William Lustig’s grindhouse cult classic from 1980, Maniac opened in the U.S. last month courtesy of IFC Midnight and had its world premiere at Cannes in 2012.

It was due to screen next at the New Zealand International Film Festival, running July 26th through August 11th.

Explaining the ruling, a representative for the New Zealand fest said that the OFLC informed them that:

The POV (“point of view”) nature of the film mixed with the psychopathic behavior of actor Elijah Wood is more than disturbing, that it’s potentially dangerous in the hands of the wrong person — that is, a non-festival-goer.

Neil Foley of Monster Pictures, the film’s Australia-based distributor, said in a post on the company’s website:

Banning the film beyond festival screenings is an insult to the intelligence of the adult population of New Zealand and does little more than to serve as an open invitation to illegally pirate the film.  We will explore every option to have the banning revoked, but at this stage it [isn’t] looking good.

In a blatant statement of intent that was already crystal clear, the OFLC’s web address is www.censorship.govt.nz.

Frankly, I don’t think Maniac looks all that disturbing.  Trailer isn’t red band.  I mean, did you cast an eye over Frankenstein’s Army last week?  Maniac isn’t a cinematic masterpiece by any means… but banned?

Here, have a look for yourself.

Now, post a comment and tell me whether or not you would ever take that Hobbit tour of New Zealand.  And whatever you say, I promise to not censor it.

Oh, I think he was plenty creepy at some points during Return of the King in particular.

” And whatever you say, I promise to not censor it.”

Now that’s obviously the red flag, I just wonder where the bull is?

Well, it’s not me. (In case you were wondering.) At least not today. So all Ill say is, yes I’d go on the tour if I had the time and money. And Elijah doesn’t seem all that creepy to me.

Though, I have been stopped by the cops just for walking down the street more times than anybody I know, so it’s entirely possible m y judgement as to what constitutes creepy is-somewhat-off.

God of punctuation, why hast though forsaken me? That should be “So all I’ll”, not “So all Ill”.

The original Maniac is a movie that really left me feeling in need of a shower. I’m surprised at the feel for the need for a remake.

Though I completely agree with the need for a shower after watching the original Maniac, the idea of censorship from what I thought was a benign and reasonable place made me want to make the water extra hot…

Rigel, the only thing I wanted to censor was your punctuation but you beat me to it.

I wonder: If the lead character had been played by someone besides Elijah Woods, would New Zealand still have censored this movie. Is his face so associated with the LOTR movies and New Zealand the censors there were afraid of guilt by association? I don’t know.

This idea reminds me of (perhaps an apocryphal story) that Walt Disney had asked an older Annette Funicello not to wear a bikini in the non-Disney teen movies that she did later because her face and name were supposedly always associated with the Mickey Mouse Club and Disney brand.

The new Maniac might be the best “straight up” horror flick released so far this year- grisly, stylish, stripped-down, and set to a glorious old-school synth score by Rob.

And the idea of government censorship of art in any modern society is utterly ridiculous.