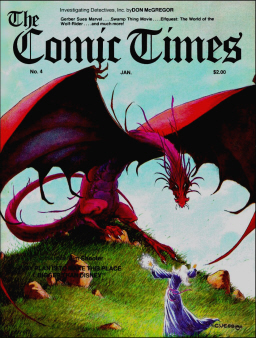 Just check out that 1980 Charles Vess cover at right. Isn’t it neat? I sure thought so, when I accidentally stumbled across it on eBay.

It is now mine. Mine mine mine. Because, Charles Vess. Also, poor impulse control.

I’m embarrassed to admit that I never heard of The Comic Times. Had to look it up and everything.

I’m embarrassed because the early 80s was when I was pretty much completely immersed in the comics scene. I was buying and reading comics by the truckload, from Arthur’s Place in downtown Ottawa. Frank Miller’s Ronin, Cerberus, Love and Rockets, Alan Moore’s Swamp Thing, Keith Giffen’s Legion of Super Heroes, Howard Chaykin’s American Flagg, Pacific Comics… I didn’t need something called The Comic Times. I was living The Comic Times.

I’m sure enjoying reading it now, though. It’s a fun and informative little zine, and I bet I would have gotten a lot out of it back in 1980. Near as I can figure out, it only lasted six issues. It was edited by Dennis Cieri and Mark Gasper, and published out of New York. Like The Comics Journal, it was printed on newsprint and looks like it was typeset with a Smith Corona.

This issue is 82 pages, and includes a 13-page interview with Marvel Editor-in-Chief Jim Shooter (“I want to make this place bigger than Disney”) and features on Elfquest, Thundarr, and Investigating Detectives, Inc by Don McGregor. 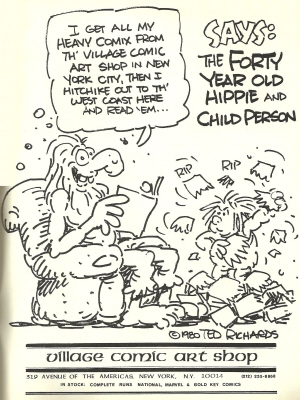 This ancient, barely-alive comic fan is identified as “The Forty Year Old Hippie.” For the record, I am currently 49.

Now, doubtless I would have agreed wholeheartedly with the attitude of the young comic sellers and artists who created this ad back in 1980. But that’s not the point. The point is, young people suck.

Other than that painful collision with my past, I wholeheartedly enjoyed this nostalgic trip back to the days when I looked forward to comics day with mounting excitement.

Naturally, since it’s cool, vintage, and genre-related, copies of The Comic Times are criminally cheap. I paid $2.50 for mine (including shipping), about the same as it would have cost to purchase it in 1980. Copies are currently for sale, on eBay and elsewhere, for less than 4 bucks.

The Forty Year Old Hippie was an actual character by Ted Richards back in the heyday of underground comix, rubbing figurative shoulders with the likes of the Fabulous Furry Freak Brothers and Wonder Warthog at Rip Off Press.

You can also see a bit more of the Hippie at Richards’ website:

“The point is, young people suck.”

Right you are. Thanks for the links.

I was unaware of The Forty Year Old Hippie before seeing the ad. He was clearly before my time. Must be because I am…. TOO YOUNG.

Young punk. Get off my lawn!

I recommend highly the 40 year old hippie, which it seems the artist has made available again.

Frankly it’s cool, it predicts “Netflix” in a dark way, way before the internet. Dr Atomik is another cool not as well known as Crumb/Shelton/Corben but wonderful to discover work.

If we are doing 80s stuff, anyone read “Redfox” or “Adventurers” on Black Gate?