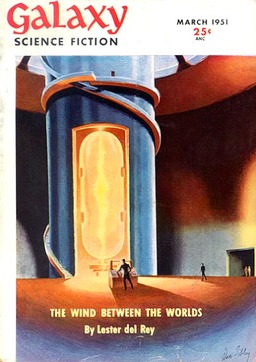 I noticed this on the table of contents: “Next issue at your newsstand first week in March,” which means that the March, 1951 issue was available in early February. That’s fairly standard for magazines (probably so the reader feels like an issue is current), but I admit I still find it confusing.

“The Wind Between the Worlds” by Lester Del Rey – Instead of exploring the solar system, mankind inadvertently figures out how to transport between worlds, drawing the attention of the Galactic Counsel. As a provisional member, Earth can exchange matter with other members of the council. When someone sabotages one of the matter transmitters, it remains open, sucking in large amounts of air from Earth every second. It’s up to a couple of engineers and a bureaucrat to figure out how to switch off the transmitter before the U.S. (under increasing pressure to fix the problem) bombs the facility, which would leave the transmitter permanently open.

“The Other Now” by Murray Leinster – Jimmy’s wife is killed in a car accident. But in the weeks that follow, he begins to see glimpses of another reality within his home – her cigarette butts in the ashtray, doors opened that he knows were closed. Then he sees her diary open and reads the latest entry. Not only is it the current date, but she writes of missing Jimmy since his untimely death.

This has a great Twilight Zone feel to it. Yes, I know it predates the show, but the comparison is still valid. Leinster may have been the first author to use the idea of parallel universes, given that his story “Sideways in Time” appeared in the June, 1934 issue of Astounding. I leave this open for discussion.

“Good Night, Mr. James” by Clifford D. Simak – Henderson James isn’t aware of his identity at first. It slowly comes to him, along with his task. He’s tracking a puudly, an alien that will soon multiply; the puudly’s sole purpose is to eliminate anything that isn’t one of its own. On Earth, all life forms are in jeopardy unless James succeeds.

I liked this story, but I detest the name for the alien race: puudly. Simak writes of the horror of the creature’s hate:

Not unreasoning hate, for unreasoning hate defeats itself, but a rational, calculating, driving hate that motivated a clever and deadly killing machine which directed its rapacity and its cunning against every living thing that was not a puudly.

Why tack a name like puudly to something like this? They sound so deadly, yet their title is puudly. It’s just too close to cuddly. 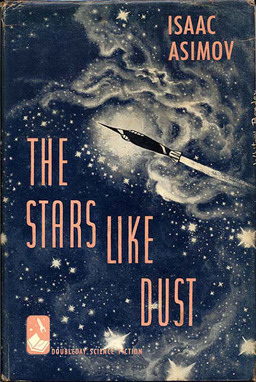 “Socrates” by John Christopher – The protagonist rescues a puppy from extermination by its owner and names it Socrates. Socrates was exposed to X-Rays from the protagonist’s lab, leading to his enlarged head.

Over time, Socrates’s body grows to be closer in proportion to his head, but his intelligence is far beyond that of other dogs. He learns to speak and philosophize, but only with the protagonist. The owner becomes more abusive and prone to drunkenness, but Socrates refuses to leave his master. Yet both the protagonist and Socrates know that things cannot continue as they are – something drastic will need to change.

I loved the interaction between Socrates and the protagonist. It was a good story with a small surprise at the end. (John Christopher was actually one of Samuel Youd’s pseudonyms.)

“Tyrann” (Part 3) by Isaac Asimov – In this conclusion to the novel, Biron, Gillbret, and Artemisia join the Autarch of Lingane in a search for the rebellious world – a place that may have enough military strength to overthrow the Tyranni. They search the Horse Head Nebula, checking a few stars for signs of such a planet. But the Autarch has his own plans for the mission, and they do not include Biron. Meanwhile, the Tyranni warships follow their movements, ready to close in if such a rebellious world can be detected.

Having finished the entire novel, The Stars, Like Dust (which is what Tyrann was named in book form), it left me feeling a bit empty. I was hoping for a galactic battle between Tyrann and the rebels, but it was not to be.

This novel is part of Asimov’s Galactic Empire series, but from what I’ve gleaned on the Internet, it seems like a standalone novel that does not tie in to any of the rest of the series. I find that disappointing, given where this novel ends. Still, not a bad read, and given how much I enjoyed the earlier parts, I can forgive a less-than-climactic ending.

Matthew Wuertz’s last retro review for us was the February 1951 issue of Galaxy Science Fiction.