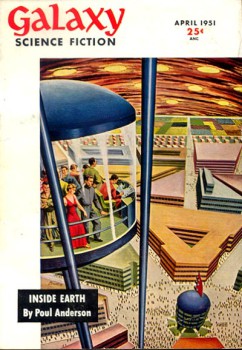 With this issue, Galaxy reached a crossroads. Caught by rising costs, H. L. Gold had to do something.

He noted on the Editor’s Page that he could take one of two actions. He could cut costs by lowering fiction pay rates or the quality of the paper stock. Or he could raise the price of the magazine. Pressed for time, he opted for the latter. Beginning with the May, 1951 publication, the price jumped from 25 cents to 35 cents.

For those who love statistics but hate math, that’s a 40% increase. But the way I see it: quality has a cost. Good call, Mr. Gold.

Now let’s turn to the fiction.

“Nice Girl with 5 Husbands” by Fritz Leiber – Tom Dorset is an artist, unknowingly displaced by the winds of time to a century in the future. He meets a girl named Lois who brings him back home to meet her family. Tom learns that not only is Lois married, but the relational structure of the family is unlike anything he’s ever heard of.

I found it interesting that the protagonist never put together that he was in the future until someone casually mentioned the date. The story seemed more of a quick picture of how the future could unfold, but I wanted something deeper by the end.

“Inside Earth” by Poul Anderson – Conru gives up his entire life, even his physical appearance, in order to appear like an Earthling. Valgolia rules the galaxy, including Earth, but its aim is more than controlling the planets. It wants equality throughout the planets, and such can only be achieved by forcing unity.

Valgolia covertly supports revolts against itself in order that those revolting would find commonalities among one another. Conru faces a difficult task – infiltrating the rebellion and helping to guide it while ensuring no real harm will come to Valgolia. The complexities increase when he finds himself falling in love with a high-ranking member of the rebellion.

This was my favorite story of the issue. Anderson is a wonderful writer. Like with this passage:

Dark sky, dark land, dark world, with the sheer terrible mountains climbing gauntly for the upper gloom, crags and glaciers like fangs against the dizzy cliffs, with the great shadows marching across the bloody snow toward us, with a crazed wind muttering and whining and chewing at our flesh.

I just have to take a breath after that. Or how about this?

Up and up and up, round and round, up and up, metal clanging underfoot and always the demon screech of the siren — up! 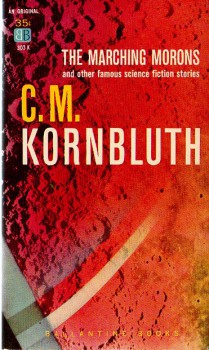 Okay, I’m still a fan boy of his after reading “Garden in the Void” in the May, 1952 issue. He actually used the word eldritch in that one. I tip my hat to anyone who can successfully execute a story with that word in just the right context, without sounding pretentious.

“Betelgeuse Bridge” by William Tenn – Snail-like aliens arrive on Earth. They are well-mannered and humble, open to any question, through their circuitous answers often leave the questioners confused. When they discuss an invention that can extend a lifespan by five times the current expectancy, people want it badly enough that they’re willing to offer whatever their friendly visitors want.

Tenn’s story is a different spin on alien encounters. It even has a few surprises.

“I, the Unspeakable” by Walt Sheldon – The protagonist was given a new identification two years ago during the renumbering of all Northem citizens. The identification is four letters, and in his case, it forms an embarrassing word. Unable to find work or even respect among his peers, he goes to the Govpub office to ask for a new designation, risking imprisonment or worse – for to ask for a new designation would mean that the authorities who assigned it to him had made a mistake. And they are not to be questioned.

This was an excellent dystopian, oppressive-government story. It had some edgy moments and it felt very real at times. I hesitate to say I enjoyed the story, given the subject matter, but it was well written and worth reading.

“Field Study” by Peter Phillips – Mr. Pake works as an accountant for the government. (Likely, he’s part of the IRS, but “Internal Revenue Service” wasn’t formalized as a name until 1953.) Pake investigates a man who heals people, but the man is elusive, never claiming to be a physician or forcing anyone to pay for his services. Beyond that, the man goes from country to country in this manner, but with a new appearance each time.

I wasn’t particularly fond of this story. I think I’ve seen too many stories along these lines before, where an almost omnipotent and omniscient character enters the picture, answering straight-forward questions with vague answers. 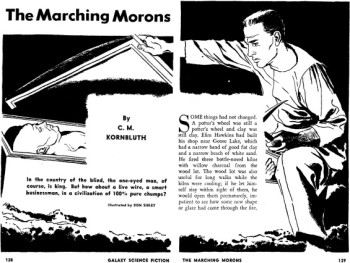 Granted, this may have been one of the first stories to come up with the notion, but I would love to read about an omniscient character who says everything plainly.

“The Marching Morons” by C. M. Kornbluth – In the early twenty-first century, a dentist uses a new anesthetic that accidentally leaves John Barlow in suspended animation. Uncertain of how to awaken the man, doctors decide simply to bury him as though he died.

Centuries later, a potter discovers the casket and knows how to reanimate Barlow. The potter is excited by the find; perhaps the man from the past can help their society solve its biggest problem.

I felt a bit offended by some of the notions Kornbluth presents in this story, namely that there are members of society who simply should not breed, or at least not to excess, lest we would become a society of incompetence. Perhaps he purposefully wrote it this way to show that even if we perceive people as moronic, they have value, given that the story delves into genocide as well. I’ll leave that open for debate.

Matthew Wuertz’s last retro review for us was the March 1951 issue of Galaxy Science Fiction.

So I have decided to read these issues with you as your articles appear. I have a good collection of digests, so I should be able to follow along. I’ll give you a full report in a few days. I hope others join in, and I hope your retro-reviews keep coming.

You forgot to mention the photograph on the back cover…:) I am sure that increased the shelf appeal of this issue!

Gus – the more the merrier! I look forward to your report.

I was a bit surprised at the back cover (a bit of a provocative ad for an Ernest Hemingway book). I wasn’t quite sure what that had to do with Galaxy, other than the fact they paid for the advertisement.

This thread is going to get buried before I finish the magazine! I have read the first two stories, so I’ll get my thoughts in now before it’s too late…:)

“Nice Girl” seemed about 15 years ahead of its time. This story would have fit nicely with the sexual-revolution-inspired stories from the late sixties and seventies. This is pretty fearless stuff for a time when such ideas were considered pornography and thus censored. It is pretty tame by today’s standards, and a good read, as you would expect from Fritz Leiber.

Thank you, Matthew, for highlighting the quotes from “Inside Earth.” Prose like that is what helped bring science fiction to maturity and respectability. This story has a thoughtful ending, not a fairy tale everything-is-happy-and-perfect-now wrap up like we might expect in a 1950s issue of Imagination or Other Worlds. Much credit to Mr. Anderson and Galaxy for this gem.

Matthew…any chance you can tell me the next issue you will be reviewing, and when the post will be? It will be much easier to post a response before the thread is buries that way. Thanks!

Gus, thanks for sharing your thoughts on the first two stories.

I’m reviewing the issues in order. Granted, I reviewed May, 1952 first because that was the oldest issue I had at the time. Once I had the issues from the first two years, I started at the beginning (October, 1950). Up next, I’ll be reviewing May, 1951. I try to post a new review every month (or close to it), so you’ve got some time to catch up. 🙂