The Dad Who Turns Into a Supernaturally Driven Psycho Killer 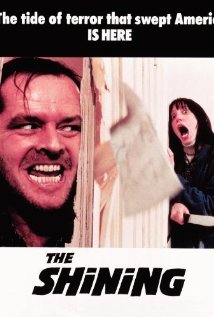 [Okay, before I get to all that, let me give a quick shout-out to those who have been following my ongoing blog of ARAK, Son of Thunder: I’ll have a new installment (covering the two-part story of issues 7 and 8) here for you next Monday. But this week I’d like to introduce the first in an occasional series examining aspects of the horror (primarily film) genre, which I’m going to call A Shard in Horror’s Broken Mirror. (Hey, how many “occasional series” does this guy have, anyway? Is he really, like, three different guys who take turns writing this blog under the same pen name?)]

The shard of horror I’m looking at today is an oft-recurring theme in many modern ghost thrillers: A character — usually, but certainly not always, the lead male — is manipulated or outright possessed by a supernatural agent (ghost, demon) and gradually becomes mentally cracked. This nearly always culminates in a final act where he is chasing his loved ones through a spooky locale with murderous intent.

Let me say at the outset that I’m generally not a big fan of this plot twist in most contemporary horror films. More on that later. First, though, a few words on where this narrative concept comes from. 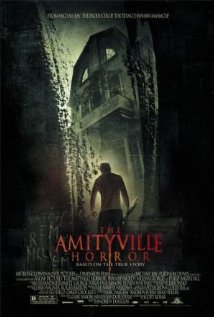 In this particular variant, a family moves into a haunted locale; spirit at said locale targets an individual — typically the father — and takes over that person’s mind with malicious intent. The film that really kicked off this craze (no pun intended) was the surprise 1979 hit, The Amityville Horror, which was allegedly based on a true story. You probably all know that story, originally chronicled in the 1977 book by Jay Anson. Family buys their dream home for a song, reason for the bargain price being that thirteen months earlier a mass murderer slaughtered his parents and four siblings with a gun while they slept in bed. The new family experiences paranormal activity and the evil spirits that motivated the original killing start causing the father to have homicidal thoughts. Less than a month later, new family pack their bags and split, going off to collect royalties for the book and movie rights.

Since the book was a bestseller and the film a blockbuster, the formula has been repeated ad nauseam, generating umpteen sequels, a remake, imitations, and countless TV documentaries either defending the Lutz family’s story or else decrying it as a hoax. Neither the film nor any of the sequels were all that great (although for full disclosure, I haven’t seen all eleven of them), although they are at times entertaining (and they do offer a few genuine chills, like that red-eyed pig thing! And the image of the house itself has become iconic). In short, the basic premise has entered our collective unconscious; it is part of our national folklore. (And it’s a good cautionary tale as to why you should always inquire a bit further when the asking price for a home seems too good to be true! I mean, the place could have been a meth lab. Or squatted in by demonic entities.)

The other relevant film to this discussion is the exemplar, the paragon, the no-one-does-it-better: Stanley Kubrick’s The Shining (1980). Based on Stephen King’s 1977 novel, Kubrick’s film provided the template for many (always inferior) films to come. It is the primary reason why “ghosts drive dad crazy” has become such a common, lazy plot device for scriptwriters and filmmakers.

I’m going to assume you all know what happens when the Torrance family moves into the Overlook Hotel to be its lone caretakers one fateful winter. If not: You know that iconic image of a crazed Jack Nicholson’s face crammed through an axe-hewed door with the caption “Here’s Johnny!”? Yeah, that’s what happens. Mild-mannered Jack Torrance goes on a maniacal spree, chasing his wife and son through the Overlook’s haunted hallways and snow-encrusted hedge maze with an axe. Do they get away? I won’t give you any spoilers. 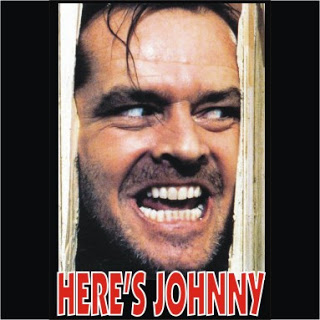 You may have also heard that King expressed serious disappointment with Kubrick’s adaptation, mostly because of thematic differences between his book and the film (as well as an interesting criticism of the casting of Nicholson — King believed that since Nicholson is perceived by the audience to be a bit crazy from the get-go, it dilutes the impact of his descent into madness). However, the film is now widely regarded as one of the greatest horror films ever, and I think that even King in recent years has admitted as much. (He did get a chance to write his own teleplay for a three-part TV miniseries back in 1997 to redress his grievances, and since he had complete creative control I’m sure the miniseries, which I have not seen, was perfect.)

I’d put The Shining on my top ten horror film list for sure. It is a scary film. Not a bad book, either. One thing King is right about with regard to themes, though: the book places far more emphasis on the fact that Mr. Torrance is being overtaken by a force of evil far more powerful than him. One of the most tragic moments in the book that was excised from the film [spoiler alert] is when, in the midst of Jack’s spree, his own personality momentarily reasserts itself over the demonic force that has possessed him: if I recall correctly, he takes the axe that he was wielding at his son and turns it on himself, chopping at his own face in order to kill himself and end the madness. Shockingly, his self-inflicted death does not end the horror but simply gives the entity full, unfettered control of what is now a soulless body. For the remainder of the book, it is a faceless revenant that is chasing the son. 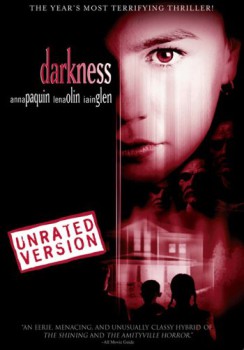 So now this idea — the evil entity getting at the rest of the family through a character with a psyche vulnerable to its influence — is a standard part of the supernatural-horror lexicon. The weak link is usually a male; more often than not, it is the dad. For a more recent example, consider the 2002 film starring Anna Paquin, Darkness. It’s a film that piqued my interest with an ad campaign that emphasized “haunted house,” but of course it is the father who, after living with the house’s unhealthy influence, becomes the most pronounced, immediate, physical threat. The 2010 film Insidious, which managed until the very last scene to avoid the trope and skillfully provide the scares solely via the supernatural, also took this sort of left turn in the final seconds (much to my disappointment).

I can see why it is tempting to filmmakers. It adds another direction from which they can come at the audience. After providing the traditional scares of ghosts and haunted houses, you also get to toss in elements of the axe-murderer genre. And since the person chasing the character is not a stranger-danger Freddy or Jason, but the character’s own father, it should be even more horrifying, right?

In this regard, I can see commonality with another horror tradition, that of the werewolf. A seemingly normal person turns into a homicidal monster. Dr. Jekyll erupts into Mr. Hyde.

In his 1981 book, Danse Macabre, King divided different monster types into an imagined deck of Tarot cards. Two of the cards he posited were The Werewolf and The Ghost. The werewolf card plays on the theme of the inner beast — the rage, ravenousness, and potential for violence buried deep in each man’s psyche (and woman’s, but it is primarily man’s — men, after all, comprise nearly all the rapists, serial killers, and violent offenders). It is the dark side of the animal id, the shadow self that can transform a “normal” person into a monster. It is sometimes unchained by alcohol or drugs, by brain damage or stress-induced chemical imbalance, or by really mean ghosts. So when a film has a ghost turn daddy into a raging maniac, you get the werewolf and the ghost — two cards from the deck for the price of one!

I don’t like it. Most of the time. Again, The Shining is one exception. But that film played it so well that any similar plot must invariably be compared to this Kubrick masterpiece, and usually pales in comparison.

There’s probably another reason why the prevalence of this trope in recent ghost pics gets on my nerves, and it’s a matter of personal taste. I’m a middle-aged man, a father and a husband. So when the film family moves into a haunted house, the father is typically the character I most identify with — I experience the scares vicariously through him. When he is overtaken by the evil entity or aura of the place, he is no longer the foil but has become an extension of the frightening presence. I’ve lost my POV character.

Frankly, I’m also not a big fan of “young children in peril” as entertainment, especially when it is the person meant to be the child’s protector who is doing the imperiling. Obviously, this is a valid recurring theme in art, but if I’m looking for a goosebump-inducing chiller as entertainment, that scenario must be handled pretty delicately if it’s not going to devolve into cheap exploitation or become too uncomfortable to qualify any more as entertainment. Sure, in The Shining, it is cringe-inducing, but [spoiler alert] young Danny Torrance gets away in the end. What if, instead, the film ended with the Nicholson character burying the axe in his son’s head? It would still be a cult classic, undoubtedly, but not watched and embraced by legions of new fans as it is.

When it comes to fathers in horror films, I gravitate towards characters I can identify with and root for all the way through (e.g. The Changeling, Poltergeist, Stir of Echoes, Dead End, The Mist [and if you’ve seen that last one, Dear Reader, you know there’s one big fat irony there!]). But that’s just me.

And now, if you’ll excuse me, I must go read another chapter of an R.L. Stine Goosebumps book to my daughter.

As far as my tastes in horror go, in general, I strongly agree with this point. In order for horror, as a genre, to be enjoyable (at least for me), I agree that it must not be so, well, horrific. And for me, “horrific” means too close to actual horrors.

I’m a huge X-Files fan. But one episode I’ll never re-watch is the episode where a stalker kidnaps a girl and keeps her locked in the basement. Bring on the monsters and demons, I say. But I don’t find enjoyment if the horror is too real.

As far as how fathers are represented in modern horror films, check out last year’s “The Possession” for a nice inversion of the tropes, even if the epilogue is cliched and a little too neat.

I have ‘The Shining’ on dvd somewhere (yeah, I’ve had it a while). I love it. It’s beautifully shot, knows where it’s going and is permeated by a genuine sense of evil (I particularly like the scene in which the evil presence hijacks Jack’s fantasy about having a drink) but I think King might have been onto something re using Nicholson. I’d say the same about Duvall. Both give essentially one-note performances, something for which Kubrick must ultimately take the blame. Nicholson seems crazy from the get-go to me, and Shelley Duvall – who got a hard time on set – basically plays three or four variations of ‘terrified’. The kid is excellent, but collectively the three never convince as a family unit.