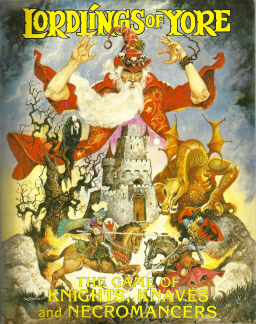 There’s a lot of interest in retro-gaming today. Seriously, it’s a thing. There are fewer sales of big-budget shooters and a lot more people hunkered over tablets and cell phones, playing games that look like they were first compiled in 1995. I’ve seen my sons jump over more platforms and spill more monster guts in low resolution on their iPad recently than on their Xbox 360, let me tell you.

You really want retro gaming? You need to pull open a zip-lock bag, my friend. Respect.

I own a lot of computer games. A lot of them are old. Hell, most of them are old. The bulk of my collection comes from 1989 – 2003, when I still had time to occasionally insert a disk into my desktop machine and play Icewind Dale or Mechcommander a few hours a week.

Amiga games? I got ’em. Commodore 64? Couple hundred, easy. But we’re still talking the era of boxes here. You want real retro gaming, you need to go back even before my time, to when the first computer games were sold in zip-lock bags in small hobby shops, and almost exclusively for the Apple II.

I’ve collected a few of those fascinating relics over the years, but only a very few. I have Cranston Manor, Hi-Res Adventure #3, from an outfit called Sierra On-Line, Inc (1981). I have Odyssey: The Compleat Apventure, from Synergistic Software, from 1980 (purchased on eBay nearly 10 years ago for a ridiculous sum). But the rarest game — and certainly one of the most interesting — I possess is probably Lordlings of Yore, a marvelous fantasy strategy game I found on a used game shelf in a computer store in Champaign, Illinois in 1993.

It’s one of only two copies I’ve ever come across in some three decades of collecting.

Lordlings of Yore is subtitled “A Game of Knights, Knaves and Necromancers.” It was published exclusively for the Apple II by Softlore Corporation in 1983, and it was packaged in — you know it, brother — a zip-lock bag.

Unlike most fantasy games of the era, Lordlings of Lore didn’t feature dungeon delving, a two-word parser, or jumping over barrels. No, it was a fantasy strategy game, a pretty rare beast in 1983, believe me.

More than that, it was multi-player. The game offered the ability to challenge your friends (and up to three computer opponents) in “hot seat” fashion — meaning each player entered her instructions for the turn one at a time, and then turned the computer over to the next player. The turn was only played out when all the players had keyed in their commands.

I first learned of Lordlings of Yore from a full page ad in Computer Gaming World, the leading game mag from the mid-80s until it folded in 2006. (I’m pretty sure it was CGW, and not a tabletop gaming mag like The Space Gamer, but I haven’t been able to locate the original ad to confirm). But I never actually saw a copy until that fateful moment a decade later.

But I never forgot it. The promise of a deep fantasy strategy game you could play with friends on a computer was too much to forget in 1983.

And there was something about the cover art… the jousting knights, the crumbling castle, the sinister tree (complete with eyeball and hungry vulture, no less), and the powerful wizard, looking on as he orchestrated events. It was colorful and filled with the promise of limitless adventure. Well, as limitless as you could expect in 1983. [Click on the image at top for a full-sized version.]

Here’s a taste of the back cover copy:

LORDLINGS OF YORE — the ultimate “Fantagy” game… not just a fantasy or an adventure; not just a strategy game… but the best of all three. High resolution full-color graphics, sound, and animation, and the most intriguing movement and combat system in any computer game yet… No two games will ever be the same, and that’s a promise! 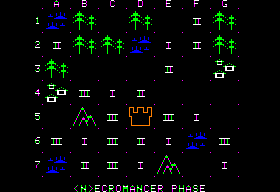 Click on the back cover image above right to see the complete text.]

“High resolution graphics” was probably overselling it a bit, even for the early 80s. That’s a screenshot at left. I think the green things are trees, if that helps you out.

Gameplay took place on a chessboard-like grid, seven squares by seven. Not quite as massive as an eight-by-eight chessboard, of course, but computers have limitations, you understand.

Players could cast spells, move armies, collect and spend taxes, and do other kingly things.

The game came with a 30-page rulebook, a unit roster, and a featureless Shire Map, for that extra association with J.R.R. Tolkien.

My copy also came with a letter (printed on a dot-matrix printer) from creator John F. Baxley to the original purchaser, dated March 10, 1985, with the following message:

Enclosed you will find your corrected copy of LOY. It appears that someone did, indeed, try to copy the disk and this resulted in a glitch in the program. This probably happened at the distributor, or elsewhere. It is impossible for us to tell that, but at any rate, your disk has been corrected and is now 100% operable.

We are very sorry for the inconvenience, but the game is worth the wait! Have a good time and thank you for supporting our products. Let us know if you have any further problems.

I am enclosing an entry blank for our national LOY tournament. I thought you might be interested.

Translation (for those who didn’t play games in the early 80s, when 90% of game disks in circulation were hacked versions of commercial releases): It seems you damaged your disk while you were attempting to copy it. We’ve fixed it for you. Jerk.

There is a YouTube video created by a lonely fan that demonstrates what actual gameplay looked like on an Apple II (proving I’m not the only person in the world to have a copy). Check it out:

Yes, that’s the actual speed the game ran at. And yes, it really did take that long for the Motorola 8086 processor that powered the Apple II to paint the entire screen. We liked it that way. You could go get a coffee. Or write a novel.

Lordlings of Yore had a lot of promise, but I can only conjecture it was an abysmal failure as a commercial release. Softlore corporation vanished without ever releasing a second product or making a ripple on the industry — not even a Wikipedia entry exists today. Searches only confuse Google (“Did you mean: software corporation.”)

As for Lordlings of Yore, only a handful of copies exist. There’s not so much as a cover scan on the Internet — I had to unpack my copy and borrow Alice’s scanner to provide you the images on this page.

Lordlings of Yore was developed by Jon F. Baxley and programmed by Trey C. Johnson. It was published by Softlore Corporation in 1983. In a zip-lock bag. You know it.

Our most recent Vintage Bits articles were Sword of Aragon, Black Crypt, and Battletech: The Crescent Hawk’s Inception.

Wow — The amount of nostalgia created by that screenshot … Never knew about this game (or owned my own Apple, for that matter) but I had some friends who had the machines. I remember how big a deal the jump to color monitors was.

Okay…I am now going to petition GOG to see if they can get Lordlings of Yore up for sale. I’d love to play this and see Baxley and Johnson get some small revenue.

As for retroclones, you might want to try Dungeon Robber http://blogofholding.com/dungeonrobber/

The most nostalgic thing about this game is the password. I wish we could still use four character passwords.

(In my best old man voice): Things were simpler back in the day.

I’m pleased and flattered to see that there is still interest in my old Apple game, LORDLINGS OF YORE. In fact, I’ve just recently been contacted by a couple of sources about converting the concept into a phone and/or Facebook game. I still own the rights and would be happy to chat with anyone about the game. Thanks for the postings. Happy Gaming!

Great to hear from you! I’m glad you enjoyed the article. I’d love to hear more about the new version of the game… keep us posted here!

If you’d ever like to say a few words about developing computer games in the early days of the industry, we’d love to have a guest post from you.

A humble Kickstarter has been launched for the game to re-vivify it to its glory. The link is below! https://www.kickstarter.com/projects/1473724653/lordlings-of-yore?ref=email

Hey everyone, this is Trey Johnson, the person who programmed LoY. Working with Jon and being part of Softlore was a great experience. My favorite memory was what one of the reviewers said about the game. I don’t remember exactly what the manual said, but at some point it tried to explain why something might not work as expected, and it was described as being due to the “fog of war”, but the reviewer said he thought it was due to “fog of programming”, which was totally accurate! Hey, I was quite proud of the lightning, it was animated! Jon, I hope you are well, we should catch up sometime.

Thanks for stopping by our humble website. And for sharing that great memory! I read a lot of game reviews back in the day, and I’m sorry I missed that one.

You should be proud of your work with Lordlings of Yore. Did you work on any other projects you can tell us about?