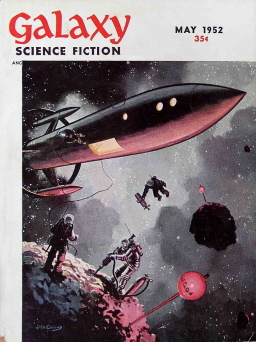 I’ve been blogging about my experiences collecting and reading Galaxy magazine (originally titled Galaxy Science Fiction). Within my initial collection I had the May, 1952 issue (Volume 4, Number 2 for those who want to get that detailed). The issue included a novella, two novelets, and three short stories from Boyd Ellanby, Peter Phillips, Charles De Vet, Richard Matheson, Franklin Abel, and Poul Anderson.

“Category Phoenix” by Boyd Ellanby – In a Big Brother society ruled by Leader Marley, Dr. David Wong works in Research, tasked with finding a cure for White Martian Fever. But for the past ten years, Dr. Wong has been researching immortality, something he inadvertently discovered while creating a cure for Blue Martian Fever. Dr. Wong hopes to share his findings with those closest to him without alerting Leader Marley – a challenging task, considering how closely they’re monitored.

“Lost Memory” by Peter Phillips – Palil and his associates examine a new arrival from outer space. It seems like them – inorganic and metallic – yet without normal modes of communication and shaped as a cylinder. When they’re finally able to communicate with it, they cannot understand all of its words, like mann, blud, and deth. Their only hope of saving the poor, blind creature is to perform an operation, but the visitor is so confused that it keeps asking for corrosive oxygen.

“Wheels Within” by Charles De Vet – Mr. Bennett suffers from headaches so severe that not even a neurologist can help. The headaches even escalate into hallucinations of a beautiful woman named Lima. One day, he discovers a show in town called “Lima, Mystic of the Mind,” and he is shocked to find that the woman exactly resembles the one from his hallucinations. For a price, she offers to cure him of his headaches, though the cure will involve pain and anxiety through false experiences, leading him into a cyclical dream sequence that seems unending and hopeless.

“Lover When You’re Near Me” by Richard Matheson – David Lindell arrives on Station Four, dubbed the Three-Moon Psycho Ward by the men in the trading company. David works alongside Gnees, all of them men who seem so simplistic, perhaps dumb. At night, he retires to a house where a repugnant Gnee woman cares for him; rather than speaking, she communicates telepathically. But the woman soon invades David’s mind throughout the day, even from afar, and each night when he wakes, he finds a bouquet of fetid flowers at the foot of his bed. He wonders if he can keep his sanity for the duration of his six-month assignment while the Gnee woman continues to push and pry into his thoughts.

“Freudian Slip” by Franklin Abel – Herman Raye fishes for trout when suddenly, everything made of earth disappears. In its place is an unnerving nothingness. Rather than panicking, Herman continues with life, guessing that he’s likely having a mental breakdown – something which he has seen in others, given his work in the field of psychoanalysis. Later, in the city’s bookstore, aliens escort Herman through a vortex, taking him to an unusual being of two distinct personalities. The personalities desperately need his help with amnesia, for their memories are necessary in restoring Earth.

“Garden in the Void” by Poul Anderson – Within the asteroid belt, Hardesty and his wife, Marian, mine for profit. They discover a remarkable asteroid that appears covered by greenery, so they land upon the surface. Amazingly, the greenery is an eldritch life form, joined together like vines. But even more amazing than this garden is the story of its gardener.

I hadn’t read anything by Poul Anderson before, and his story was my favorite of this issue. When I read it, I knew I had discovered a master of the field. He crafted this story with great detail and poetry. Here’s an example:

It was quiet, the blank quiet of airlessness and emptiness, the only noise that of the muted scrunch of footsteps carried through the spacesuits, only that and the hot, rapid thud of heart and breath.

I didn’t see any “You’ll Never See it in Galaxy” advertisements this issue. Perhaps enough time had passed since their first issue that they felt established enough. Though the back copy of the magazine still carried a house ad (“Who Reads Galaxy? – Doctor, Lawyer, Indian Chief.”)

This is an intriguing issue, with stories that aren’t dulled by time. Forget the clichés you think you know and read something from the past. There are worlds of wonder within those old pages.

[…] I’m still a fan boy of his after reading “Garden in the Void” in the May, 1952 issue. He actually used the word eldritch in that one. I tip my hat to anyone who can successfully […]

[…] next review will cover the June, 1952 issue. My review of May, 1952 was actually the first time I covered Galaxy review (it was the oldest issue I owned at the […]

This will be my second review-response tonight. I consider you to be a friend, Matthew, but you really need to ease up on the homework.

GREAT cover by Jack Coggins. According to his website, Jack worked the front lines during WWII, drawing covers for YANK magazine. He died in 2006. The space dust and bumpy asteroid add a lot of atmosphere to this wonderfully detailed cover drawing. Mr. Gold was brave to sell a science fiction magazine without girls on the cover much of the time. Quality, in the stories and on the cover, can sell magazines too!

I have commented on a few occasions that a lot of the short stories in Galaxy have enough potential to become a novel. My opinion is that “Category Phoenix,” as a Novella, has barely enough material for a short story. Yes, there is intrigue and social difficulty surrounding the immortality caused by Blue Martian, but the story goes on too long for me. The sibling rivalry between the two sisters was tedious and predictable.

“Lost Memory” is delightfully morbid. It doesn’t take long to figure out what is going on, but that only adds to the painful anticipation of what is coming. Admit it, you laughed too.

“Wheels Within” kept me guessing and guessing wrong about where the story was headed. Poor Mr. Bennett has the same problem, I suppose, since he keeps trying to figure out what is real and who his real allies are. I was relieved that things turned out well for him. I was rooting for him all the way!

“Lover…” is a painful story to read. David has a nice adventure laid out for him only to be drawn slowly into a complicated relationship with an alien who he finds revolting. I was quietly screaming for him to run away, but alas, they never listen.

I always enjoy Mr. Matheson’s work. Gordon van Gelder mentioned that Richard Matheson set a record for the longest absence-and-return to F&SF, with the bulk of his contributions ending in the sixties, with a recent return to short fiction just a few years ago, shortly before we lost him for good.

I was not sure what to make of “Freudian Slip.” The premise was amusing and mildly interesting and the ending was like a joke the middle schools boys would tell each other. This could have been much better.

Finally, “Garden in the Void” makes three stories in this issue that were painful to read because of the inevitable and somewhat dark conclusion. Once again, I found myself practically screaming at the poor couple to GET OFF OF THE ASTEROID before they had to take over the gardening duties. If this story were not so well written I am sure I would not have cared so much.

This was an excellent issue overall, with the editor going five-for six on story selection, which is way better than hitters in the major leagues.

Gus, I consider you a friend as well. Hopefully I’m not making you feel guilty each month. 🙂

One of the things Gold was striving for was a science fiction magazine you could carry around without being embarrassed by the cover. It seems, based on the fiction Galaxy was publishing, that Gold was also trying to demolish racism and sexism.

I absolutely love Poul Anderson’s writing. Such talent. I have to reread sections at times because I’m like, “What was that?” Great stuff.

I do remember learning that Galaxy was supposed to be the one you don’t mind being seen with. Not a bad idea, but the sexy girls are still the most collectible pulps, while you can get most any issue of Galaxy for five bucks on ebay (excepting the Bradbury issue, of course).

I also have to admit that I like having a deadline to read one issue each month to keep up with you. Otherwise, I am sure I would not spend so much time with this excellent magazine. I need to go back and read two issues from before your reviews started to fill in the gap between the first issue and where we are now. That task will probably go on my summer list.